Running with the cufflink candidate. 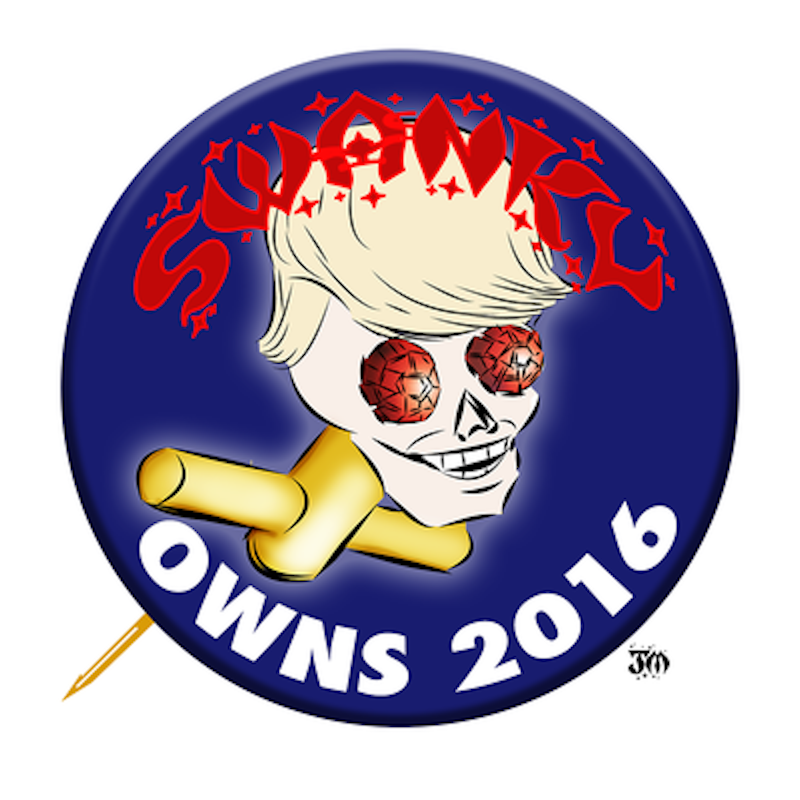 Who could have anticipated a ruby-eyed skull cufflink big as your head running for president of the United States, never mind one quite this quick on his toggle?

Yes, Swanky… with his shock of awesome hair and his own personal beauty pageant.  Swanky in your face, making his outraged Jonathan Jo mouth like an O. For some time now it’s been Swanky this and Swanky that, but Swanky just won’t go away.

In his column, Will described Swanky’s candidacy as unprecedentedly and incorrigibly vulgar. Brutal, huh? Talk about speaking truth to a ruby-eyed skull cufflink big as your head! What’s more, Will accused Swanky of being a counterfeit Republican. Ouch! These days, that’s tantamount to calling somebody a fake Popeil Pocket Fisherman.

Swanky could’ve replied that George Will’s mother ate skunk cabbage. But he saved that rejoinder for an impertinent Fox news anchor, following through with a roundhouse “Face hurt Megyn? It’s killing me!”

We recently caught up with Swanky on his campaign bus between appearances and the ruby-eyed skull cufflink big as your head was in no mood for banter. When not mixing it up with the Fabulous Moolahs of cable news, Swanky kicks back hard on message: “Make America Steak Again.”

“Steak,” argues Swanky, ”recalls a time when American lifestyle was This Thick. You could take it to the bank and the teller would hand you A-1 Sauce. Then something changed. Suddenly there were options. First with The Chicken. Then with The Fish. What the hell was that? I’ll tell you what. That’s over Red Rover, that’s what. When Swanky moves in, the White House goes full boat Steak House and I’ll step on a thousand toes to see it’s done World Class to perfection.”

Inside the Beltway, Swanky’s insensitive style has already taken a toll. “His words kind of hold you down and make you eat dirt,” explained one victim, whose progressive Montessori education never prepared him for anything so coarse. “Just looking at that ruby-eyed skull cufflink big as my head makes me feel like I need a cleanse.”

Concerned parents of key media players have already transferred their adult children to exclusive private, parochial, and artisanal networks, newspapers and magazines just to avoid direct contact with Swanky. A young correspondent confided, “Like, we fly drones behind his big stupid campaign bus and everything. Well, we don’t really fly them, but we tell these creepy gamer temps what to do and tell them not to look at us while they do it. Sometimes I swear I can smell Swanky’s cologne right through the drone,” sneered the tastefully hard-boiled journalist/daughter of a prominent American politician. “Off the record, you wouldn’t believe the stuff we’ve seen.  Do you know Swanky eats his salad with his fish fork?”

“So shoot me, I appreciate black onyx with the golden veins,” confessed Swanky. “But it was a rush job and all they had in stock was this red-schmed mock onyx with black flecks, which frankly looks very Master Honeymoon Suite if you know what I mean. But hey, it’s a bus, not a jet. What am I, Coco Chanel? I’m a ruby-eyed skull cufflink big as your head and I’m very comfortable in my skin.”

The subject turned from Swanky’s skin to Democratic presidential candidate Martin O’Malley. Swanky paused just long enough to make his mouth that weird way and then let fly.  “He’s a disgusting, little, weak, pathetic Zwieback-teething baby. Oh yeah. And not for nothing, he’s probably lurching around right now with a load in his diaper and a rattle is his hand. B-A-B-Y. You know what that spells? O’Malley! There, I said it!  And you know what else? He only eats at restaurants with highchairs. Really! A booster won’t do. He’s gotta have a highchair decorated with baby chicks and baby bunnies or he stamps his little foot and sobs until Baby O’Malley gets his way. What’s Baby gonna say to Putin? Goo-Goo? Pass the strained peas? I mean, please.”

Swanky excused himself and rushed up to the Scenicruiser conference deck to huddle with his national security analyst. While big as your head, the ruby-eyed skull cufflink savvies that a little good advice couldn’t hurt. That’s why Swanky depends heavily on a senior vintage 21-inch Zenith color console television for Realpolitik tips and UHF channels that still feature Victory At Sea marathons. The distinguished doublewide Teutonic Provincial home entertainment center served two consecutive American presidents, until cashiered by Jimmy Carter in favor of Zbigniew Brzezinski and a perky little 17-inch table model for the Lincoln bedroom.

“I don’t care what they say about that fat old ugly console TV, that’s a national security analyst,” argued Swanky as he returned from their confab. “American electronics matched with hand-rubbed, heavily-accented Continental cabinetry—I’m telling you, the combination is charming and very persuasive. When that TV looked Nixon square in the eye and said bomb Cambodia, Dick asked how hard?

“Confidentially, all that jazz gives me headache,” admitted Swanky.

“Let the TV have the headache already and I’ll handle the beauty contest.” I took the opportunity to get down to brass metrics. I asked Swanky to describe the difference between a 9 and a 10.

“No question about it,” reflected Swanky, continuing in a stage whisper. “Let me tell you something. Are you listening? A 9 is a Lady. But face facts. When all is said and done, a 10 is a Winner and she’s just a nine. So what can I say except… get over it Lady!”

You might call Swanky a classic example of America’s crush on plush, that rare candidate with a gift for making you feel good about being a wad of bubblegum on his Bijar carpet. Or you can call him a Double Stuff avatar of Hitler and Quetzalcoatl. Whatever you call him makes him stronger, like some science fiction movie monster. Who will reverse his polarities? Who will save us from Swanky?

Swanky conflicts this reporter. Part of me wants him to propose privatizing student loans with Players Club credit cards. That’s the part of me that’s too smart to pay full price. But the tasteful part of me, the part that’s too willing to feel at home in museum bookstores, that part says not so fast.

Such a muddle, but goodness me… such fun.