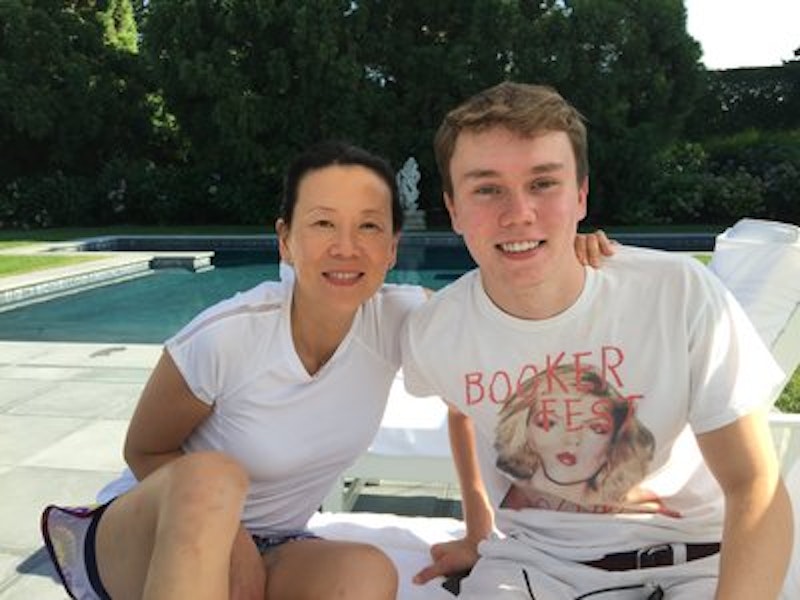 The last time I ate a hot dog was in 1967, and my digestive system has yet to recover. Just joshing, of course, although it’d been a year since a frank went down my gullet. Yet last Saturday during lunch at my brother’s pad in Southampton, I gobbled three of the mustard-slathered Hebrew Nationals—along with grilled chicken, seafood salad, tomatoes and leeks—and I swear that’s it. (Until next summer.) Later in the day, it felt like I’d swallowed a lion, and that must’ve been the reason my volleyball game wasn’t up to snuff. Can’t say the same for my losing efforts at bocce and croquet, as my brother whipped me there, but hey, competition at lawn frolics went out with men wearing suits and ties to work each day, right? Actually not, since I was chagrined at the poor showing, but those poisonous thoughts were largely wiped clean by the large gathering of family and friends on this perfect August day.

My son Booker (pictured above with the lovely Jane Lee—nephew Caleb’s wife) and I were up from Baltimore, and enjoyed the company of Caleb’s family (twin six-year-olds Savanna and Lillian), sister-in-law Barbara, grand-niece Kate Rose, niece Bronwen, cousin Veronica with her cool-dude husband Richard, and their children Olivia, Brandon and Richie. Brandon, who lives with his family in Smithtown, is entering his high school senior year and is nervously getting ready to tackle college applications. He’s a good student, and athlete, and I had to quell his mom’s fear about Baltimore—like most Americans who follow the news, our city terrifies Ronnie—and recommend that he take his embryonic pre-med skills to Johns Hopkins. We’ll see. Later that night, at a candlelit dinner outside, overlooking the bay, the fare was less problematic: three samplings of caviar, including an Italian number I’d never tried, striped bass and a simple cherry tart. Much as I’d like to, if you’re interested in politics, there’s no escaping Donald Trump, but once he was dispatched as a short-termer (if not, Jesus, the apocalypse really is nigh), it seemed like everyone had a different presidential favorite, and although crooked Hillary was shut out, various hands went up for John Kasich, Marco Rubio and The Bern. Debate was civilized, and later on my brother and I, as usual, reminisced about our childhood in Huntington, remembering the quirks and joys of our long-departed parents and uncles and aunts. Since the crickets were especially loud this evening, the classic yarn of our mom offering a nickel a head—big money in 1962—for every cricket found in the garage. My brothers and I would hunt for those critters like Easter eggs.

Booker and I had been in Manhattan a couple of days earlier, and once again the born-again friendliness of the Strand bookstore staff was stunning—at least to one who remembers the surly help there 15 years ago, when upon asking a question the guy or gal snarled at you with a “Fuck off!” stare. I was looking for an out-of-print Greil Marcus book—a re-read, but couldn’t find it in our house—and the young fellow on the bottom floor escorted me, chatting along the way, to the exact location. I do utilize Amazon, unlike many who took The New York Times hatchet job on Jeff Bezos’ company last Sunday as gospel, but that online factory isn’t so hot on hard-to-find titles. That night we met my nephew Quinn and longtime friend Michael Gentile at yet another Keith McNally bistro (Cherche Midi), this one located at Houston and Bowery, across from a Whole Foods (organic turnips replacing spent syringes), and, honestly, I wasn’t wowed. Naturally, the joint was packed, which could excuse the haphazard service, but I’m not crazy about forking over 18 bucks for an “heirloom tomato” salad, in which the main ingredient tasted like all the hothouse tomatoes that came to three to a pack that I grew up eating in the winter. But food was besides the point: catching up with Michael, whom I first met in 1980, and worked with at Baltimore’s City Paper and New York Press, was grand: maybe the most hilarious person I’ve ever met, Michael appeared fit as prime-time Mr. Ed, which is no trick at 58. Quinn gave us a rundown on the Brooklyn electronica scene he’s involved in, and if it didn’t compute with yours truly (or Michael), Booker and he were on the same page.

Booker stayed on in Southampton, but I made an early departure on Sunday, arriving at Penn Station in time for a couple of Merits and a large coffee, and embarked the meat-locker temperature Amtrak train going south. In general, I avoid all conversation with strangers, but the older man sitting next to me—splendidly attired in a pin-striped suit, red paisley tie and two-tone shoes—was a gent of the first order. We were about to shove off, and he asked the conductor, in vain, how long it’d be to his Wilmington destination, and I quickly told him about 90 minutes. A Manhattan native—who, after 9/11, became sick from the putrid air and had to escape to Hawaii for recuperation—he was visiting the daughter of a recently-deceased Vietnam buddy, and then later continuing on to Virginia. Before retiring, he owned a company in Pittsburgh, and, as I’ve never been there, I asked for the rundown. “There is none,” he laughed. “Other than the Pirates and PNC Park, it’s dull, dull, dull.” After collecting stadiums in Oakland and Seattle last May, I’m up to 20 or so, but as my brother Jeff used to say, channeling Marty Robbins, I think Pittsburgh gets an El Paso from me.