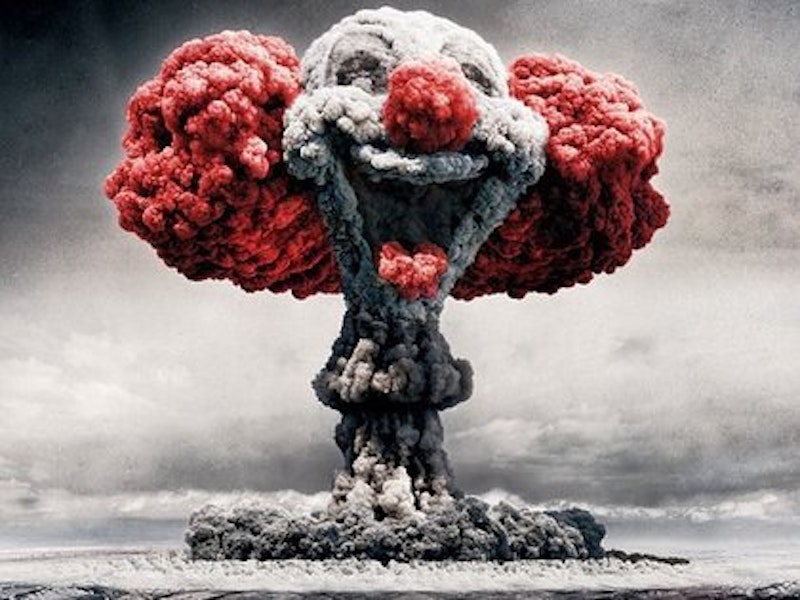 It’s after midnight. The house is quiet, except for the ceaseless whispering whir of the ceiling fans. You’re in bed, sleeping next to your partner, cats curled up at your feet, snuggling against your legs. Suddenly, there’s a sharp knock at the door. The cats look up. You wake with a start. “Did I dream that?” Again, louder: banging on the door. Relentless, unceasing this time. Alarmed, and now fully awake, you don a robe and go to the door, grabbing your gun on the way. At the door, you chamber a round, hoping that the sound carries to whomever is on your doorstep with the signal clarity of a rattlesnake’s warning. You crack the curtain on the window next to the door ever so slightly, to see who it is.

It’s a clown, bathed in moonlight. It knocks again, even louder. What are you going to do, shoot it? And then what?

Thus it is with the news. For a little over three weeks, I’ve been trying to ignore the news. It’s been an exercise in futility. As the great philosopher-kings of the Hells Angels say, “You can run, but you can’t hide.” There’s no escaping it. You can’t outrun the tsunami of unspeakable weirdness currently consuming the beaches of civilization. Short of retreating to a distant cabin in the woods or a remote island devoid of any connection to the modern world, the news is a horrifying clown that never stops knocking on your door.

I’ve always avidly followed the news, since I learned how to read. Luckily, I’m fond of absurdity. During my LSD-soaked teen years, I developed an abiding fondness for the Futurist art movement and their successors, the Surrealists, the Dadaists, and the incomparable political/artistic syncretion known as Situationism. For decades, my love of the ridiculous stood as a bulwark against the ever-intensifying encroachment of outright insanity in the arena of civic affairs. Reality has finally caught up with me. I’ve always thought of LSD as a high colonic for the mind, flushing away the encrusted detritus of obsolete ideas and fixed notions. Carrying that metaphor forward to 2015, a high colonic is entirely inappropriate for the treatment of dysentery, and if today’s news doesn’t flush out any and all fixed ideas you might be harboring about civics, politics, human behavior, and nature itself, you’re either carved out of marble or as flexible as a mountain stream. In 2015, LSD is redundant.

Consider the case of rotten.com. At the dawn of the 21st Century, rotten.com was comic relief at the end of my daily morning Internet scroll. It specialized in bizarre and offensive photographs of ghastly occurrences, often medical in nature, such as a man sticking his finger through his nose and out an empty eye socket, a motorcyclist whose face was utterly annihilated following an accident without a helmet, a large parrot perched on an erect penis, a man with testicular elephantiasis so severe that his balls looked like two great weather balloons, stuff like that. Stuff that made me feel lucky. There was also a daily news update, Daily Rotten, that covered the news of the weird on a daily basis: the inevitable Florida stories, modern cannibals, Japanese scat porn and other novel and repulsive paraphilias, pointless crimes of a puzzling nature, and general perversity of a somewhat Fortean nature. The website was a living virtual monument to schadenfreude. Several years ago, they stopped updating the site. They couldn’t keep up with it. No one can. I predict a similar fate for The Onion in the near future. Everyday life is transcending Pynchon, and it is inescapable.

Consider the following: as I write this, Laibach is performing in Pyongyang, North Korea, doing excerpts from The Sound Of Music. Yesterday, I saw a video taken on August 4th in San Francisco, depicting no less than 14 SFPD officers taking down a one-legged black man in front of God and everybody at lunchtime right in the center of downtown, handcuffing him, twisting his prosthetic leg backwards, sitting on him, and de-pantsing him. He was charged with no crime. Eight armed cops showed up to arrest a 16-year-old boy for riding his bicycle without a helmet. The USA is threatening Russia with a nuclear first strike for the first time since 1962 and claiming eminent domain over the entire world. Governments around the world are very gradually admitting contacts with extraterrestrials. Perpetual infant Ariana Grande licks donuts, whistleblower transgendered patriot Chelsea Manning narrowly avoids solitary confinement for possessing a copy of Vanity Fair with celebrity fame whore Caitlyn Jenner on the cover, the $4.5 trillion F-35 fighter/bomber turns out to be as useless as a two-peckered billy goat wearing boxing gloves, black activists keep insisting that black lives matter in the face of record-breaking black-on-black violence, and the Nazis have taken over the Ukraine under the auspices of American Zionist power couple Victoria Nuland and Robert Kagan. Donald Trump has hijacked the Republican Party. Hillary Clinton has obviously never seen Sunset Boulevard, she’s inadvertently doing a perfect political interpretation of the film. An obscure, elderly Jewish socialist from Vermont is demolishing her in the polls. The ghost of Huey Long is haunting this election process.

As the butler Riff Raff sings in that immortal family musical, The Rocky Horror Picture Show, “Madness takes its toll.” We live in times that would send Caligula hiding under his bed. We’re way past Pynchon territory, and deeply into Philip K. Dick’s endlessly shape-shifting dystopia. I’m not sure it’ll help any, but fasten your seatbelts, and smoke ‘em if you’ve got ‘em. LSD might be redundant, but pot is an absolute necessity these days.