Where The Water Bends

There be quicksand there. 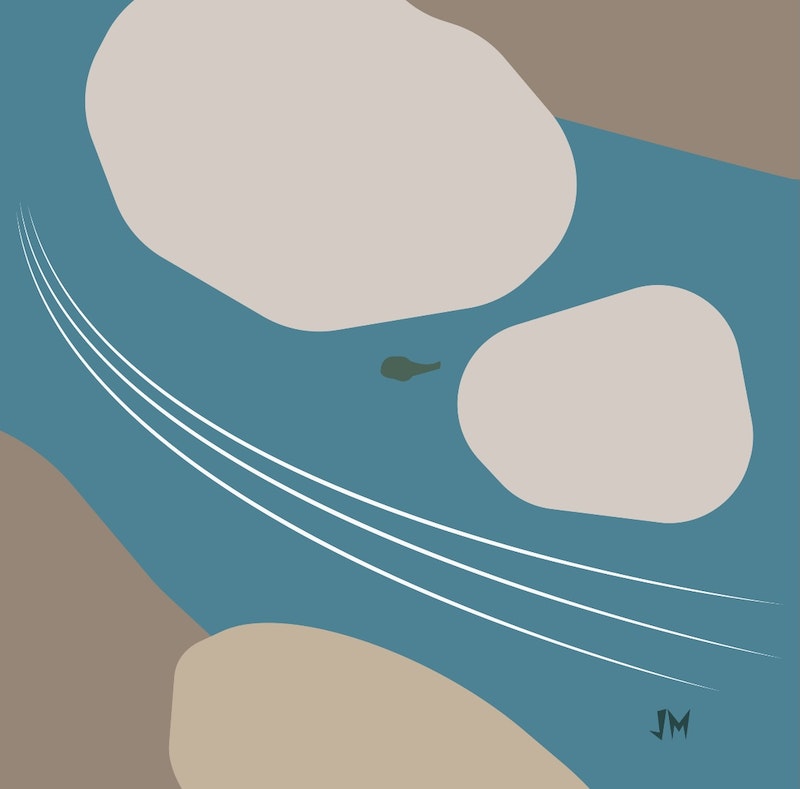 When kids ran feral, we ran to the brook.

Who didn’t who could? Always a brook, a creek, a river, like most others, we newfound neighborhood Boomer pals smelled flowing water and thereabouts room to move.

Just beyond my apartment complex and my buddies’ tiny just-built suburban tract, a serpentine strip of woods followed the brook between still other residential pockets of Plainfield, New Jersey, a few blocks from 1950s Route 22 retail giants Robert Hall, Two Guys From Harrison and Best & Company.

Not for anyone’s noble green intentions I’m sure, this shady corridor escaped development, where clearly packs of kids before us beat paths between scrub brush, built forts, destroyed others, staged stick wars, smoked stolen Luckies, often pissed, sporadically shit, and set traps with kite string that caught nothing, all without supervision.

This wet weedy Never Never Land held the additional prospect of quicksand. All of us watched enough TV to gin-up when anyone's stocking foot popped free of his galoshes or pacs stuck in muddy shallows, triggering the cautionary quicksand tape loop.

“The more you struggle, the more quicksand sucks you in.”

“Fury pulled out a kid.” (Fury was a Saturday morning TV horse that often rescued the boy who rode him.)

“That’s fake. Lassie too. But swear to God, I heard somebody’s cousin got caught in quicksand, and it took a hook and ladder truck to get him out. Kid told me.”

Any story attributed to a cousin red-flaggedpants-on-fire whole cloth, an alternate preamble to “Once upon a time.” And that was all right. While disbelief wasn’t fully suspended in the woods, we let quicksand ragtime ride, because it was the short subject, the cartoon, compared to water’s main attraction.

How it froze! How we crept out on thin ice, worrying the fresh-frozen window-clear veneer with our boot heels till it cracked. Just the right moment between thick and thin you could flex it, and work the bubbles under the ice.

How it flowed! Sometimes in spring the brook ran dirt brown rapids like a half-pint Colorado if you squinted. We gleefully personified scrap lumber and logs pitched into the torrent.  “This is me!” We were the Grand Canyon whitewater raft, the battleship wallowing in a typhoon.

We ran the bank’s edge pitching stones at our bucking proxies awash, perhaps 30 yards downstream, until giving ourselves up for lost at sea, sprinting back toss our next incarnation in the drink.

For myself, water was closest thing to spiritual I knew. My family didn’t go to church. We didn’t talk about God. We celebrated Christmas and Easter as secular holidays and yet were taught to respect what others did differently.

Sunday school for me was weekdays walking maybe six blocks solo on rainy days to kindergarten. My black buckled slicker came with a rubberized hood that turned a cloudburst into the coolest spacewalk. I can still hear and feel fat drops on my helmet.

Those great dark days I got my religion from the gutter, launching leaves into the storm drain whirlpool, watching them sucked down to another dimension. That vortex, that rotating water spiral around a hole, was primally fascinating as a flushing toilet.

As a toddler,  I was baptized in a brook, far side of the back lawn at my grandmother’s summer house in the New Jersey countryside, uncannily now at the bottom of Round Valley Reservoir. No memory of my original immersion, only a baby snap.

Here I received religious instruction over successive summers. Thanks to prompts from a cool aunt who made me a wooden spillway, I started building and destroying dams. These I sat behind in midstream reverie, mostly alone, save the company of dragon flies, water striders, and mud wasps.

Certain places along the brook offered such sanctuary, often partially enclosed by masses of elderberry and blackberry bushes, sometimes anchored by large willows on the bank. All shared alluvial mounds of smooth river rocks and a swath of gravel and sandy mud around some larger stones at a jog in the streambed, a natural constriction that might include unstudied stepping stones, or invite dam construction. Here the water quickened, teasing with trace turbulence. Here you could see water bend around rocks and beckon engagement.

I kept this myself, nothing I could articulate to my buddies. I did notice we gravitated to default places along our suburban brook. Here, the water ran wider and deeper, some knee-high boulders broke the surface enough for dry footing. The larger rocks ruffled the current and kicked up the slighted froth that became dramatic after heavy rain. Here, while others might be preoccupied skipping stones or worrying crayfish out of the mud, I could crouch just above places where the water warped with that familiar dynamic curvature. If I kept still and stared, I imagined it pulsed. And this evoked a feeling I could only qualify in retrospect, of being in the presence.

No water god, nothing that had particular truck with me, it was something experienced as through a sidewalk superintendent portal in a construction site wall, massively forceful as earth movers yet seen toy-like from a distance, part of a scalable piece. In summer I could reach down and feel the subtly racing flow with my fingertips. At spring flood stage, I couldn’t stand on the same rocks and not get swept away, just as a pollywog couldn’t swim too close to the spillway of my country summer handmade dams.

Since childhood, I made my way just far enough in elementary physics for a slight immersion in secular water doctrine. Whirlpools spun from opposing currents, waves generated by energy transmission, sundry splashes of fluid dynamics, I regret nothing stuck with me, nothing like what I felt sitting behind my dam in a brook.

No, I take that back.

What stuck was my first encounter with Herman Melville, early evening in 1956, at Plainfield’s Strand Theater, a big treat with my dad, screening first-run John Huston’s Moby Dick. I didn’t know from Melville or Huston, but word of the great white Godzilla spread in my school yard.

Primed as I was, I came unprepared for my shocking recognition of opening scenes voiced-over by the Ishmael intro. Quiet woodland brooks. Reasonable rapids. Benign cataracts between rocks and not-so-hard places I knew first hand. Surely as Ahab spiked Spanish gold to the Pequod’s mast, Huston’s watercourses and Melville’s plain words nailed my number.

“Take almost any path you please, and 10 to one it carries you down in a dale, and leaves you there by a pool in the stream. There is magic in it.”

Who expects a monster movie to hit you upside the heart right out of the box?