Where It All Happens

Several characters take a largely fictional tour of the Midwest. 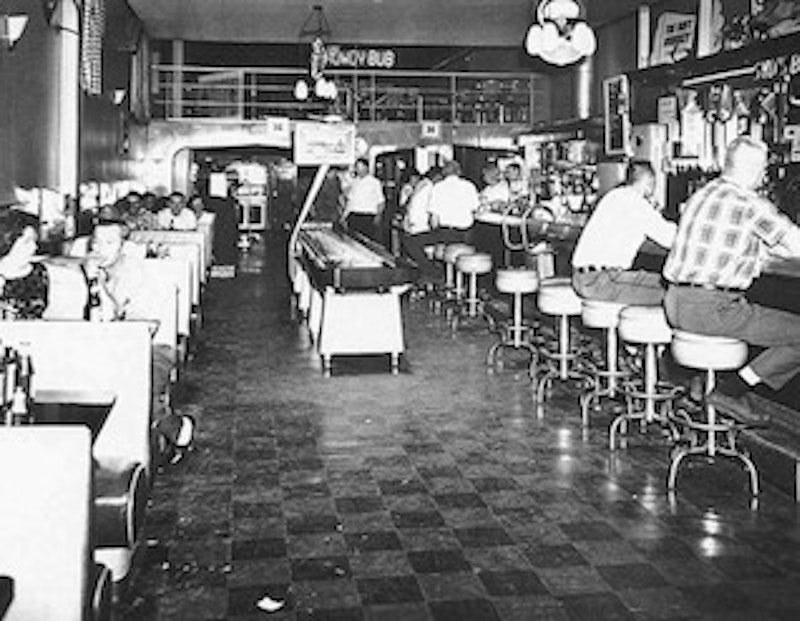 “Take a good look, because this is where it all happens, Powell,” Oscar Berkman said as we cruised down some godforsaken highway running between Schererville, Merrillville and Valparaiso, all of which were in Indiana. Still are, as a matter of fact. “This is the America your father sold King James Bibles for.”

Indeed, my father was fond of “Buffalo Wild Wings” and “Starbucks” and “Panera Bread Co.” and so on. Why drink in a bar where the men drink whiskey and eat their own shit or eat the contents of a coffee filter or eat a loaf of bread drenched in expired mustard when you can drink light/lite beer and eat microwave hot wings in a karaoke bar or suck down an ice cold mocha latte peddled by geeks with goatees or eat gourmet bread so devoid of substance that a half-pound of it wouldn’t fill the stomach of an emaciated hummingbird? My father didn’t know and neither do I. Then again, I’m a brick of hash being baked into a cake by a kid in Coke-bottle glasses, so feel free to smoke what’s left of me.

Indiana—and probably all of Middle America, but I’ve not seen much of it—is a very depressing place. There’s no variation in its topography. It’s flat land with few trees and even fewer hills. Its businesses and towns and so forth have as little flare as the terrain and, in fact, its “town squares” consist exclusively or almost exclusively of strip malls. A “big town” is distinguished from a “small town” by having a greater number of strip malls or perhaps a super-sized Walmart. It really is a wonder the whole population of the place isn’t completely insane. What’s there to do out there? Smoke “crank?” Chew gum? Refuse to sell wedding and birthday cakes to LGBTQI people? I can do all those here in North Carolina. Only for the first of those can I be arrested.

“Quit reaching for topical jokes, kid,” legendary coach “Herc” Broadsides said when I spoke to him on the phone. “People from the Midwest—like me, for example—are gonna realize how bad the fuckin’ place is without you beatin’ it into our numbskulls every five words or so.”

“I thought you were from Texas,” I said confusedly.

“Huh? Who gives a shit, kid? I’ve been everywhere, just like Johnny Cash sang. Chicago really adopted me and treated me like one of their own after I slammed seven dingers for the Cubbies back in ’98, though.”

I nodded, a gesture that signified nothing because I was talking to him on the phone. “Well, thanks for the advice. I’ll, uh, I’ll make the changes. I’ll lay off that Jay Leno stuff.”

“Right, just like ya started liftin’ weights when I told ya to,” Broadsides replied sarcastically.

While I was killing some time in the “big city” (which I’m told is Chicago, IL’s world-famous nickname) before my flight home, I had a great conversation with a bartender in a downtown bar called Lloyd’s or Lloyd’s Chicago or something. Here it is, transcribed from the recording I made with a Zoom H2N recorder.

“So I was thinking… Uh… I think humankind is a cosmic metaphor for, uhm… For God’s existence.”

“I think, uh… By the way, I’ve been, uh… I’ve been dressed down a lot up here for just coming out and talking to people like this, you know? I mean, that’s how it is, uh… Where I’m from. We’re talkers. Friendly folks.”

“It was a joke.” [Laughs.] “You must be from Virginia or something.”

“Easy mistake to make, I guess. Anyway, I think everyone is the, uh, worldly manifestation of every feeling God’s ever, uh, felt. I mean, we think of them as ‘real people,’ uh… We think of ourselves as real people and, uhm, with multiple, uh… [indistinct] But a god would have to be a more complex being than us, so it should make sense that he’d have more complex, uhm… Emotions, right?”

“I can tell from the look on your face you think I’m nuts.”

The suspect let out a loud cry like Bambi’s dying mother and his heart gushed blood all over Chaser’s face. His bushy moustache dripped fresh warm blood onto his blue button-up shirt—the sleeves of which were rolled up to reveal the beefy hairy forearms of a workman or construction worker or just “all-around tough guy”—and even on his badge. “Die!” he shouted tersely, stabbing the knife downward and into the suspect’s throat this time, tearing it wide open and leaving his trachea dangling over the arm of the chair.

“Someone told me I should check into a 12-step program today,” the hot young college comic said after a sip of his white wine spritzer. He nodded and muttered “yeah” a couple of times before continuing, “Know what I told them?”

The audience didn’t respond because they were kind of confused. Were they supposed to ask, “What?” Was the comic’s question one of those rhetorical questions they’d heard so much about? They didn’t know, so they just sat there, silent as church-mice.

“I told them to take 12 long steps off a short pier!” the hot young college comic exclaimed. A bit of “fanfare” followed. He smiled and took another sip of his white wine spritzer. He waved. “Thanks a lot, folks. You’ve been great.”