The hills are alive with the sound of bullshit. 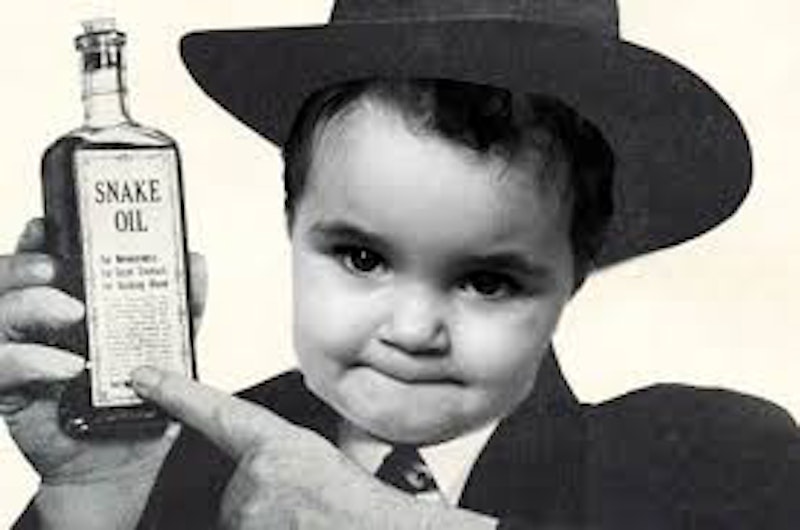 A famous artist quipped, "Anything you can get away with is art." An old friend said, "I get out of bed in the morning, that's art." I say, "I don't know what art is but I know what I like." There are way too many quotes about art. It's a scam, a two-bit film-flam. A cheap knockoff or the genuine artifact. Who can tell the difference? The grift of selling art is the big con. Art’s the immortal echo of eternity on repeat shuffle.

The art of selling is the essence of creation. The object of desire. Truth and beauty in competition, right up there with justice and the American way. Pulling the wool over the eyes of an unsuspecting public. To put a price tag on something of no real worth is an art. Now that truth is no longer true, beauty might be fake in the eye of the beholder too. What we see is a smoky cracked mirror illusion of our own reflection. Facts are mere trifles. Incidentals in the clean underwear drawer of definitive proof.

A failed businessman who declared bankruptcy on a regular basis, had a reality TV show, somehow became a pussy-grabbing racist president, and wrote a book titled The Art of the Deal. It’s confounding how someone like a village idiot and all his cronies get so far over on We the People. After all, art is only as expensive as what you can get for it. Is it finesse or special training that qualifies making money an art form?

Here’s a failed salesman who hawked everything from steaks to wine, vodka, real estate, hotels and casinos and has failed miserably at everything. Triumphant in his failures, a cartoon clown Midas who holds one of the most powerful positions on earth and everything he touches turns to shit. Not a far stretch up the ladder of business, to art and culture. Only a hypocrite fueled by delusions and greed could become a successful vandal accumulating wealth by stealing it from those who can least afford it. The art of the steal is the con artist’s game.

To get your money's worth sounds like a good investment. That's the nature of art, the ugly truth and hideous beauty behind the big stinky lies that art has intrinsic value and deep meaning. Its worth is dreamed up by advertising its uniqueness. How rare, classic, antique and in demand it is. Like gold and diamonds, only valuable to those willing to pay top dollar for it. Mass-produced large-scale deception by heartless bastards who put money above all that is sacred, holy or profane. Emotional trapezes swaying in a deadpan circus of mediocrity. Rigging the game while balancing books in their favor and playing the odds against the percentage. It all boils down to public fraud, winning your confidence with a sales pitch straight from hell.

It’s not illegal if everyone agrees to say so. Creating more diabolical schemes to separate you from your coins. The classic 30 pieces of silver and a bunch of thugs with a fucked-up vision and a paint brush creating artistic anarchy from our fears. They cover their mouths with their hands when they talk like gangster teamsters in a union hall of uninventive wheeler dealers. What do we want/need so badly that we sell ourselves so short? A slice of ridiculous pie and a piece of  crazy cake. Like cheap cigars and rail drinks. It's all lumpy gravy. The daily monetary occurrences made in unfair and inequitable enterprises. Illegitimate creativity and barely legal unoriginal thoughts for a penny.

Close the deal and shut your mouth. Put us out of our misery, we long-suffering artists of the common denominator. Boxes filled with files full of numbers plus or minus the deficit of diminishing returns. Foolish pride and pomposity standing the way of progress and process. There’s not a single shred of decency left. Heads spin with dancing dollar signs and the sound of money music. The hills are alive with the sound of bullshit. Make no mistake beyond the pale shadow of doubt there’s no civility left in our national life blood. No compassion or virtue waiting patiently for the next folly to tumble down from the heavens. Not a soul lifts a finger to stop the madness. Be wary of what’s pretend in the make-believe world of culture. Art is a manifestation of making something from nothing. Leaving behind a legacy isn’t really important to anyone. It’s in the convincing that’s of importance. The conniving sway of a life and the cost of doing dirty deeds better known as business as usual.

These gutless wonders who pay no taxes, still getting over, hoarding more and more. Richer than god yet making us pay our unfair share. Leaving nothing left over from less than nothing to spare. We don’t need another mindless commercial to sell us a bill of no-good goods. A rectangular painting to hang over the shabby chic sofa. Cramming our loyal consumer skulls with bad ideas about everything for the benefit of none but the profit margin. Appreciate your lowly lot in life. Art makes the unbearable a bit more comfy. Enjoy the ride of a new way of looking at the same old thing. The high cost of creation. Like it or lump it. You bought it. You made it. Free for the taking. Whatever’s left is better off left up to the imagination. You can’t buy that.