When Superman Was Half a Swastika

What does it mean? 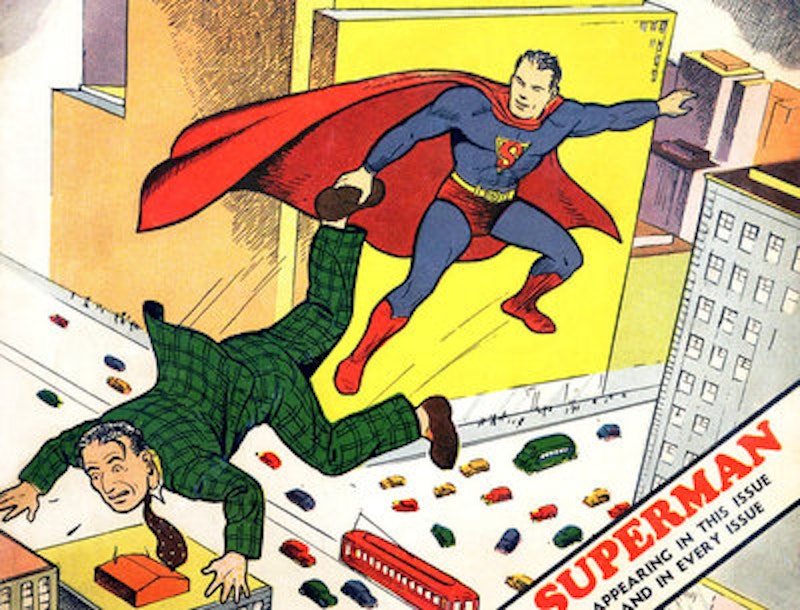 The box of catalogues sat atop a box that held a toaster. The toaster box sat atop a box full of paperbacks. This last box was the broadest and largest by far, but I’d put too much in it. It bulged, and one of the fattest books shoved its spine into the air. This spine was a wide green thing, white letters for the title, and the book was The Rise and the Fall of the Third Reich. Above the title sat a white circle with a swastika.

Let’s say you’re standing at the kitchen sink, hoping to somehow rinse and gut a green pepper, and meanwhile trying to find room for your feet next to this tower of soon-to-be discards. Glance down and the swastika, down there in the lowest box, is a good distance below the topmost catalogue in the pile of catalogues. Even so, the two manage to be alongside each other. You see one picture and you see the other, in a pair. The catalogue cover features a reproduction of Action Comics from December 1938, when Superman was something new. World War II was about to happen, but it hadn’t yet. Superman kept busy with criminals in badly chosen suits and ties. In fact the cover of Action 7 shows him dangling one such loser above midtown Metropolis.

Joe Shuster, the fellow who drew Superman in those days, had a clumsy touch. The outline of Superman’s head is solid enough, but much of his face never showed up. There’s a definite something where the jaw should be, and a forceful pair of eyebrows above his slit eyes, but that’s about it. Worse, Superman appears to be stationary. That’s a drawback for a character bounding through the air. Shuster put in speed lines, but they’re drawn like he was hoping nobody would see them. The floating ginger bread man with a cape gains force from his muscles—again, not much fleshed out but present in outline—and from his cocked knee and out-flung left arm. They point where he’s going to go, and they do so with pronounced body tension.

Catch the outlines of the drawing—let’s say you just stepped around the boxes because the refrigerator didn’t close—and you see an awkward, woodcut rendition of a swastika, pretty much. The resemblance holds along Superman’s right edge, from the arm to the knee. The hind side is iffier; there the swastika elements look like they’re drooping. His arm points down because he’s holding on to the thug by the thug’s shoe. Superman’s leg points down because that’s the only way a leg can point unless the knee is doubled up. Even so. We have a caped man, there in the middle of the comic book cover, who is mutating into a swastika.

Shuster was a Jew. Did he like swastikas? I doubt it. But people had them on their minds. Just to think of an emblem, even a fancy S, was to walk on ground staked out by Hitler and Stalin. In the decades since, emblems have become stock properties of superheroes. Back then the fancy S was a spin-off of the hammer and sickle, not to mention the ugly black spider of Nazism.

Standing by the sink and letting the water run, it’s easy to believe—or to suspect—that the match-up of the book spine and catalogue cover has to reveal something. History is fumbling its way to revealing a truth, letting it slip. At the dawn of the superhero, when the first pair of minds (I mean Shuster and Superman’s writer, Jerry Siegel) were making something of the concept, the fellow who had to churn out the panels and covers found himself drawing half a swastika when he meant to draw Superman.

The terrible thing is, I could swear the above counts as a thought. I suppose it isn’t, really. After all, if swastikas and superheroes have that much in common, why didn’t more superheroes look like swastikas? But only that consideration, that lone barrier, holds me back. Otherwise I’d be ready to believe it all. I’d think I’d picked up on history’s subconscious rumblings. I’d think that history had spilled its secret to me while I was standing next to my boxes. There I was, about to rinse my pepper, and I glimpsed the nub of what other people fumble to represent with their clichés about superheroes as fascists. Superman looked like a swastika because a swastika looks like a body. Swastika and Superman were fascism’s and freedom’s different but similar attempts—both unconscious—to make an icon out of the simple experience of being a person in a body, an experience that remained fundamental to human life while being redefined and infringed on by the modern age of machines and organizations.

I’d have seen all this because the refrigerator door opened and I had the contents of my storage closet dumped in my apartment’s kitchen. But no, most drawings of superheroes don’t look like swastikas. They don’t now, they didn’t back in the 1930s and 40s, when swastikas were really on people’s minds. All I have is my boxes. My boxes and my pepper.