A Pair of Heroes on St. Nicholas Avenue

The Tubman Memorial and Hancock Park. 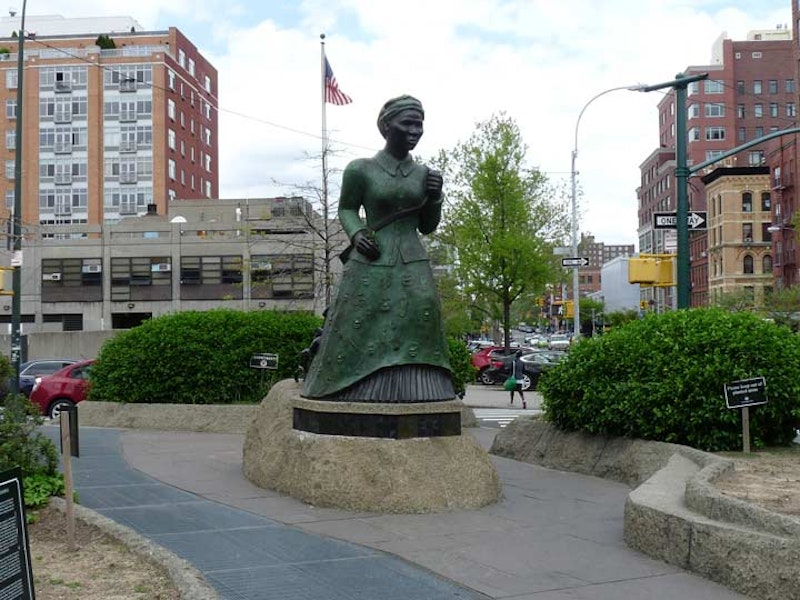 St. Nicholas Avenue, the patron saint of the original Dutch colonists of New Amsterdam, has had its present name since 1901, but along with Broadway, it’s one of the original roadways of Manhattan Island, having been originally trodden by the Native Americans who lived here in the precolonial era. In the 1700s and 1800s, the road existed under a variety of names such as Harlem Lane, Albany Post Road, and Kingsbridge Road, but in 1901 it was given its present name, following the tradition of upper Manhattan avenues being named for historical or geographical places or figures. Unlike Columbus, Amsterdam or West End Avenue (9th, 10th, and 11th) though, it never had a number and weaves its way across the grid, at one point glancing off Broadway, before ending as St. George Hill at Dyckman Street where a vanished fort, and later amusement park, had been.

I was walking up St. Nicholas Avenue last week and found the likenesses of two Civil War-era heroes at Frederick Douglass Boulevard, the former 8th Avenue renamed for the former slave who became a renowned author, orator, and statesman, and at Manhattan Avenue. 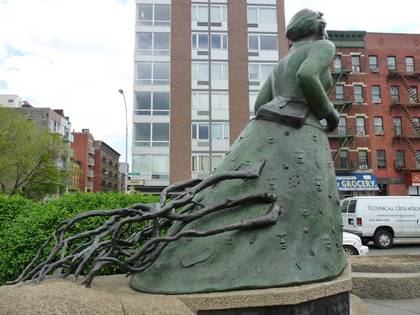 Alison Saar’s “Swing Low,” a sculpted tribute to Civil War-era abolitionist Harriet Tubman, is Manhattan’s newest sculpture of an actual female historical figure, of which the borough has relatively few examples: Jeanne D’Arc is at Riverside Drive and West 93rd, Eleanor Roosevelt, at Riverside and West 72nd; and there are busts of Israel’s Prime Minister Golda Meir at Broadway and West 38th Street and author Gertrude Stein in Bryant Park. I’m probably overlooking a couple. When dedicated in 2008, it was the first public memorial in NYC to Tubman, though the length of Brooklyn’s Fulton Street carries the subname “Harriet Tubman Avenue.”

Harriet Tubman was born into slavery in Maryland in 1822. She was abused by her slavemaster, at one point being struck in the head by an iron weight at age 13 for coming to the aid of a fellow slave. Tubman escaped in 1849 to find haven in Philadelphia thanks to the Underground Railroad, an elaborate system of tunnels, houses, and roads set up by former slaves and their allies in the abolitionist movement.

Tubman herself joined the Underground Railroad in 1850 after Congress passed the Fugitive Slave Act, which made it illegal to help a runaway slave. She retrieved her sister and her children from Baltimore in 1851 and galvanized by this success, returned to the south and headed 18 expeditions, whisking over 300 slaves to freedom, including her own parents in 1857.

Tubman was amazingly successful in the Underground Railroad, never losing a person to capture and never being caught herself, despite an award of $40,000 offered for her capture. During the Civil War she became a nurse, scout and spy for the Union Army in South Carolina, participating in military campaigns that freed over 750 slaves and inflicting millions of dollars of damage on Confederate property. She was active after Emancipation, founding a home for elderly and indigent African Americans in Auburn, New York in 1908 at age 88.

Sculptor Saar depicted anonymous faces of those aided by Tubman and the Underground Railroad (inspired by African masks), along with symbols of the destroyed system of slavery such as broken chains and locks. The back of the sculpture depicts stylized roots that are being pulled form the ground by Tubman’s resolute stride. 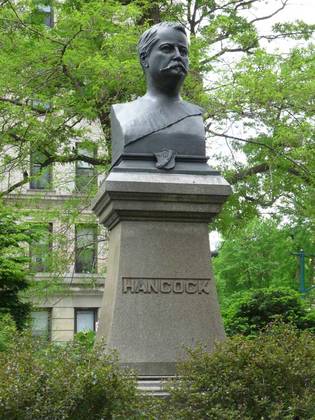 Hancock Park is the triangle formed by St. Nicholas and Manhattan Avenues and West 123rd Street, one block away from the Tubman Memorial. The square features seven mature locust trees and a heroic bust of Winfield Scott Hancock (1824-1886), a prominent Civil War general who commanded the first division of the second Army corps in battles at Williamsburg, Fredericksburg, and Chancellorsville, VA in 1862 and 1863, earning the nickname “Hancock the Superb.” After being severely wounded during Pickett’s Charge at Gettysburg in 1863, he resumed command in 1864 and took part in assaults at The Wilderness, Spotsylvania, North Anna, Cold Harbor, and Petersburg, but ultimately relinquished command of the Second Army Corps in 1864, serving in other command posts for the remainder of the war.

Hancock ran for President in 1880, carrying the South due mainly to his Reconstruction-era General Order No. 40, issued while he was serving as Commander of the Fifth Military District of Texas and Louisiana. The order asserted that the Southern states’ rights were not being upheld under the US Congress’ Reconstruction policies. Ultimately, Hancock lost to James Garfield in the Presidential election that year. His later career consisted as Commander of the Military Department of the Atlantic on Governors’ Island. He died on the island in 1886, and he was buried in his hometown of Norristown, PA. 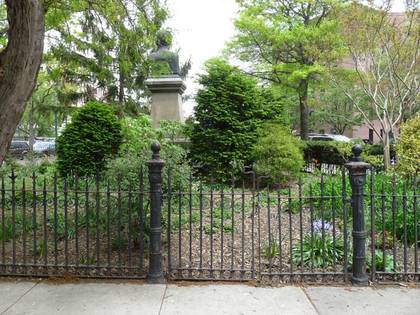 That year NYC’s Board of Aldermen (the City Council is the current cognate) commissioned sculptor James Wilson Alexander McDonald to create a monument to General Hancock, which was dedicated in 1893. In 1898-1899 Hancock Park was improved with new lawns, landscaping, and curbs. The construction of the IND Subway along St. Nicholas Avenue severely compromised the park, but it was once again restored in 1936, when it received its locust trees, and in 1998 and 1999, when the park received new plantings including evergreens, tulips, and a perennial garden.

I strongly suspect the ornate iron fence is the 1893 original, unless after the subway construction, a fence that closely resembles it was constructed.