I Laugh Because I Cannot Cry

Come to think of it, Andy Borowitz is one of the most dreadful writers who ever lived. 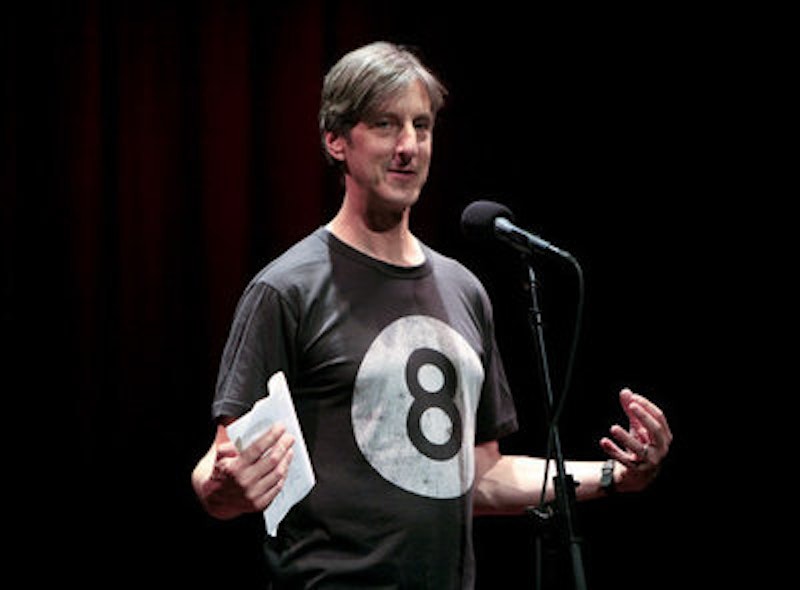 For years, that man’s name haunted me. His material kept appearing in my social media feeds, particularly when Baby Boomer relatives were posting politics-lite bullshit. I wasn’t quite sure why his work was associated with The New Yorker, much less why it constituted humor. Andy Borowitz wasn’t a name I knew, like occasional but also unfunny New Yorker contributor Woody Allen, but his was certainly a moniker that had come to occupy a fair amount of real estate on my computer monitor.

“The Borowitz Report,” a regular column helmed by Borowitz, features insubstantial faux-news headlines ladled out of the same repetitive current events goulash that crawls along the tickers on our worst cable news channels. This, in itself, is fine, since someone deserves to get paid a living wage to write the dumbass filler that ensures the survival of chat-show monologues and SNL sketches. The problem with Borowitz is that he is the absolute worst at the satirical news game, about as far below replacement level and the Mendoza Line as a performer can go before being sent back to the minors.

Once upon a time, The Onion, at least in its Madisonian iteration, wrote amusing news headlines that skewered the vanities and foibles associated with human nature. “Walking Sports Database Scorns Walking Sci-Fi Database,“ for example, was a vintage headline that elicited a chuckle from me. But first gradually, then suddenly, The Onion began publishing topical material. Most of it wasn’t any good, because topical comedy is almost never any good, but some of it was okay. At least, it wasn’t the worst, because there was Borowitz.

Borowitz is almost 60, but he strikes me as a Dan Nainan-like figure. Nainan, a 55-year-old comedian who passes himself off as a “millennial,” is fresh-faced and hack-voiced in all the right ways needed to MC brainless corporate gigs; Borowitz is surfer-haired and whimsy-minded in all the right ways needed to produce toothless satirical content for the New Yorker. He’s a cool-dad comic star, an updated Dave Barry for middle class “woofy” boomers who find Garrison Keillor’s sotto voce Prairie Home stylings a little too sharp and sassy for their liking.

Borowitz wrote for the Harvard Lampoon, a mostly terrible magazine that was spun off into the National Lampoon and thereafter yielded an entire generation of misogynistic-yet-liberal male gag writers and showrunners interested in pressing topics like young boys getting their cherries popped. Animal House, partly the fruit of Lampoon (and Harvard) alum Douglas Kenney’s feverish imagination, constituted the ne plus ultra of this genre and gave red-blooded teens exactly what they wanted: necrophilia jokes and ass-paddlings that took place on a bucolic, whitewashed early-1960s Ivy League campus. Borowitz never quite ascended to the cinematic heights reached by the likes of Kenney et al., but he did write some episodes of bad 1980s sitcoms before creating The Fresh Prince of Bel-Air, an even worse 1990s sitcom.

What, exactly, does Borowitz bring to The New Yorker? One of his recent stories, shared widely across my social media accounts, consisted of Mike Pence lamenting that it is taking Trump such a long time to quit or get impeached. The story contains no rib-ticklers, no big laugh lines, no takeaway beyond the fact that many people would like to see Trump quit because he, in contrast to the Bible-thumping, Mulan-hating, helmet-haired Pence, is an indecorous and mean man. “Why is it taking so long?” the mildly amused reader of this column might think. “Didn’t Trump pee on those Russians? Let’s go, folks...#NeverTrump!”

This story can be shared to show your support for Borowitz, your sophistication as a New Yorker reader, and your opposition to the president. It also checks in at 300 words, almost a perfect skimming length (50 words is optimal, but we health care-deprived beggars can’t be choosers here in Trump’s America). What it cannot do is serve as an example of humor that will wrench ha-has from the unwilling. It is, I suppose, the simulation of such humor, the sort of thing clock-punching hacks must script for the likes of Jimmy Kimmel and Jimmy Fallon and Jimmy Corden; and it’s in The New Yorker, which also counts for something. This essay, by contrast, isn’t in The New Yorker, which likely means it counts as less than nothing (if that).

But who am I to write this? I’ve never liked humor-qua-humor, believing most of it incapable of accomplishing anything save the hurtful ridicule of unfortunates who must serve as the butts of these lame jokes. Nor do I care for self-identified “funny” people. The prospect of some coked-up Robin Williams type in a Hawaiian shirt and pleated khakis invading my personal space and proceeding to “do a bit” fills me with terror. I never watched sitcoms growing up, because even as a little boy they struck me as manipulative, laden with unpleasant consumer-culture values which held scant appeal. The only comedy I watched as a boy was NBC’s Late Night with David Letterman, which I appreciated because Letterman’s best moments consisted of him ridiculing the rotten material that his staff of Harvard Lampoon-trained writers had prepared. The only comedy I watched as a teen was Mr. Show, a bleak HBO sketch comedy show that removed whatever smug, taken-for-granted sense of optimism remained in me.

Borowitz’s work does make me laugh, though. It makes me laugh for the same reason that the DaddyOFive scandal does, the same reason some CEO’s fat compensation package does, the same reason sexual predator Dennis Hastert’s hand-slap of a 15-month prison sentence does:  I laugh because I cannot cry. “What else is there to do but laugh and joke?” asks the narrator of pulp novelist Jim Thompson’s Pop. 1280. “How else can you bear up under the unbearable?"