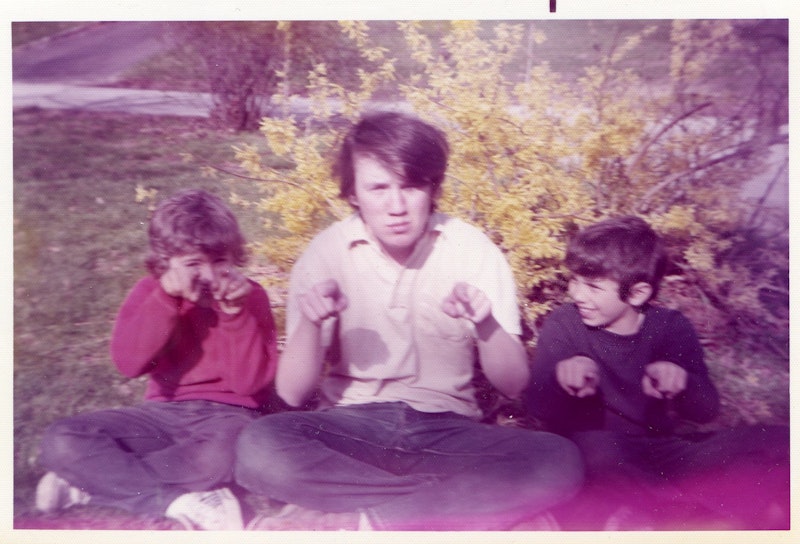 “Where were you in ’72?” I believe that was a popular slogan some time back, but then again I may be on a slow boat to China. Snatching the above photo from a stack of mix & match snaps in a dusty drawer (or “draw,” as we Long Islanders say) I remember the specifics of that day, if not the actual date. I was not truckin’ like the Doodah Man. Might’ve been watching the river flow in the woods, or trying to catch the wind. Could’ve even tipped my hat to Larry.

It was early May in Huntington and on our cul-de-sac of 14 identical houses—some owners were more motivated to spruce up their plots than others—the azalea bushes were in full bloom, lighting up the neighborhood like a really tricked-out Christmas tree. I’m in the center, a 16-year-old 11th grader, flanked by two members of my posse, kids that I babysat at least twice a week. The squirt on the left was named Adam Schwartz (I haven’t a clue who his cohort was, except that his family was a regular client), and he was a funny and unusually articulate eight-year-old, as was his sister Amy. The Schwartz parents were also sharp, and after they returned at one or two a.m. from their pharmacy near Jericho Turnpike, I’d often gab with the husband about politics and sports. I think they were so beat that they didn’t notice I was usually stoned (or zooming on a couple of black beauties from their medicine chest), or at least had the manners not to mention it.

I’d just returned from a spring break visit in New England, staying with my brother Gary and his girlfriend Terry (now my sister-in-law) in a house several miles from the University of New Hampshire, where they’d receive diplomas later in May. As I recall, it was a decent deal for my brother: free lodging in exchange for work around the property: plowing snow, raking leaves, pruning bushes, and other chores that involved heavy machinery that makes my head do somersaults just thinking about it. When the two of them were at classes, I was alone in the sticks, so when I tired of reading (I was on a Philip Roth/Norman Mailer kick at the time) and listening to records, I’d roam around the grounds, smoke a bowl, talk to the animals, and, with “Sad-Eyed Lady of the Lowlands” stuck in my head, made up a poem in my head called “Wally the Woodchuck,” and I swear to God it was just as long and at least 25 percent as mysterious/indecipherable as Dylan’s ’66 song.

Back in Huntington, on this May day, I “treated” Adam and Nameless (probably around 52 by now) to a recitation of “Wally” and, they were gracious enough to at least feign interest in my free-form creativity. Exercising my normally elephantine memory, I realize that it wasn’t until the summer of ’73, months before I traveled south for college, when I worked for minimum wage ($1.85 then) at one of Princeton University’s biology labs—our family had moved to Jersey in June of ‘72—cleaning up rat droppings from the caged and experimented-upon rodents, that I’d had a proper time-clock job.

(I didn’t go all Norman Rockwell and have a newspaper route, which seemed odd even to me, since my hands were smudged from newsprint since I was in kindergarten. As a 10-year-old, I started buying The Village Voice and National Enquirer—then black & white—at Jim’s Stationery in the Southdown mini-strip mall, and on occasion a crusty clerk would ask if my parents knew about these purchases, referring to the Enquirer, of course. My mom, who went through books by the carton, always said, “Reading is reading.” But delivering copies of Newsday by bike in mid-afternoon, in all kinds of weather for a pittance, was a lousy bargain. I was reminded of this the other day, reading last year’s placeholder “Millennial” novel, Private Citizens by Tony Tulathimutte. At one point, Linda, one of the several recent Stanford grads, was experimenting with homelessness: “At three A.M. [Linda] scavenged for something to cover herself with, and only when she was shivering under damp scraps of yesterday’s Chronicle did she truly appreciate how much thinner the dailies had become.”)

Anyways, I lined my pockets through an assortment of freelance jobs around the neighborhood, with a rotation of mowing lawns in the spring and summer, and shoveling snow in the winter. But with a desire for books, records, movies, concerts, and controlled substances, it was imperative to ramp up my revenue stream. As it happened, there was just one teenaged girl on our block, Allison Reilly, who’d be the natural for babysitting jobs, but she was either uninterested or, more likely, a waitress at Friendly’s or the Colonial Diner not far from Huntington High School.

Maude might’ve had an abortion on TV at the time, but there still wasn’t a call for male babysitters—sexism!—and it wasn’t easy convincing young parents that I was qualified to feed, read stories, and tuck in their progeny. My salesmanship won the day—although I’d sometimes have to go into double-drive after some transgression caused a temporary cessation of duties and get the assignment back. I did endure the ribbing of my buddies for taking a “chick’s” job (not that they minded raiding the liquor cabinets when stopping by to do homework together), but it was really pretty easy work. I didn’t care much for settling down crying babies, but there was only one of them in the 10 or so kids I minded.

It was at this time that my parents were trying, with paltry success, to sell our beat-up house at 123 LaRue Dr. Makes sense: five kids tearing up the joint, my mom’s aversion to housekeeping, a basement that flooded every time there was a bad thunderstorm, and the real estate agent just threw up her arms. The house was on the market for 18 months, which meant my dad, who’d bought a car wash in Trenton, had to commute back and forth on weekends, and finally, in May of ’72 was sold to a newlywed couple for a measly $19,000, about the same as the purchase price in the early-1950s.

After high school was finished for the year, I joined my parents in Jersey, and never saw those kids again.