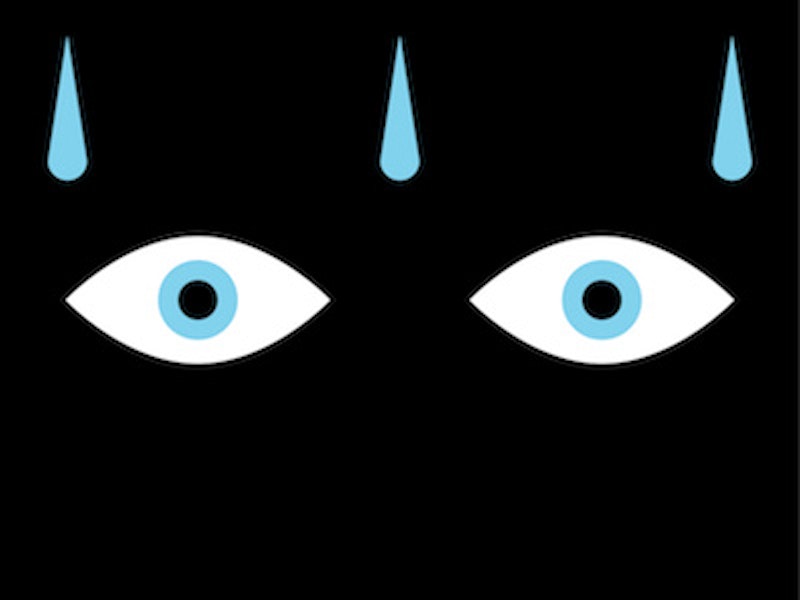 Robert Foont limply pushed his Rapidograph technical pen this way and that, creating a cute and comical Valentine's Day anthropomorphic bear couple, his latest in a long line for American Greetings.

A few hours ago he'd meekly asked Aline where she was going. She'd screeched, "OUT! JUST OUT!" It always came to this, Robert thought, and then sighed.

He walked from his studio, into the bungalow's living room. Taylor, their tubby 16-year-old spawn in shorts, tank top and flip-flops, sat on the couch staring at the rug, elbows resting on widespread knees, shoulders hunched, face pallid, eyes glazed, "mosh pit" bruises blending with "tats." Robert said, "Why don't you see if there's anything good on?" The lump didn't look up, just sneered, "Why bother?"

Stepping out onto the porch, into the night, Robert inhaled moonlight, gazed at the lonely stars. They gazed back. He sighed. Robert sighs a lot. He also grinds his molars in his sleep.

He went back indoors, past the imbecilic teen, through the kitchen, down the creaky wooden stairs to the basement, his "man cave." Here was a La-Z-Boy, a mini-fridge, a Panasonic stereo, and his collection of blues LPs. He put on a favorite, the first Paul Butterfield, when they were "authentic." No feints at "raga rock," no "soul" horn sections to adulterate. Just Chi-town blues, straight up, no chaser, LAMF!

Listening, he wallowed in his toxic stew. He detested his wife. Why'd he ever marry the witch? (Because I'm a loser, no one else would have me.) Or have a kid with her? (Because I'm a moron.)

He felt as if the walls were shrinking in on him.

Aline spent her time "jazzercising" her peasant-stock body into a taut muscle-bound, almost masculine, frame. Her butt belonged on a Clydesdale. The better to go out at night, disco-dancing at the trendy bars with her aging and angry "feminist" rat pack, pick up a young stud, not return home for a day or two. "Home"? What a joke, what a bad joke.

"Born in Chicago"! Butter would know how to handle a bitch! Punch her in the face so hard your hand sinks in! Or a straight razor to her throat! Get on your knees and beg, woman!

Robert held the shot glass in a white-knuckle grip. Chicago! The blues! He hoisted his glass to Chicago! To real men!

Sigh. But he was just a greeting card cartoonist. Mild-mannered. Argyle sleeveless sweater atop a sunken chest. Wallabees. Coke-bottle lenses. A caterpillar mustache. And the nervous tic.

From upstairs, a loud crash. Dammit! He bolted upstairs into the living room. A bookcase that'd housed hardcover slip-cased high-quality reprints of vintage comic strips and comic books was toppled over. Taylor was nowhere to be seen, the front door was wide open, mosquitoes wandering in. He heard Taylor's rustbucket Jetta rumbling away. Dammit! What th'!

Robert's back was too weak to right the massive oak bookcase; it hurt just to think about the exertion.

Dammit! Sigh. What's the damage done to my books? Crushed corners on mint-condition editions signed to me by Carl Barks and John Stanley? Replace those? Impossible! What the freak happened? Taylor! That twit! Dammit!

And sigh. Back to the basement, just in time to flip the LP over. He poured another shot to calm down, to stop seeing red. And another. When side two was over, he played the first side again, real loud. No bee-yotch to holler at me to turn it down. Neighbors? Frick th' neighbors! We is havin' a par-tay!

"Shake Your Money-Maker" came on and Robert's soaring spirits plummeted, nose first into the mud. He knew Aline was at some Cleveland bar, doing just that, shaking her money-maker, "strutting her stuff" for a bunch of horndogs to ogle. Some young boozehound would hit paydirt tonight, delighting in "doing" an old broad wearing a wedding ring.

Aline and that "women's lib" bunk! The man is supposed to be king of his castle! Dammit!

Sigh. It was different for his dad, it was a different world then. Sarge Foont was an army lifer, WWII combat vet. Robert was the youngest of five boys. When we got out of line, Sarge would belt us one! He took no guff. His mind wandered to the day Sarge walloped the livin' crap out of teenage brother Max, even knocking out two teeth. If the kid started to bawl, Sarge would just slug him harder and yell, "DON'T BE NO SISSY BABY! WHEN I WHUP TH' TAR OUT OF THAT KRAUT, HE WEREN'T NO SISSY BABY! ARE YOU LESS OF A MAN THAN THAT %$#@ KRAUT! C'MON, SISSY BABY! AFRAID TO HIT BACK! C'MON, SISSY BABY! C'MON! HIT ME!"

He shook his head, chuckled, and muttered, "The good ol' days... Jesus H!"

All of this reminded Robert of his stash. He opened the boiler room door, flipped on the light. From behind the furnace he dug out a cardboard box of the Third Reich memorabilia collected by Sarge at the close of the Big One: swastika armband, bayonets, German medals, a Luger, all kinds of stuff he and his brothers had used to play war.

At the bottom of the box, wrapped in a Nazi flag was Robert's secret: 1950’s under-the-counter fetish magazines: Spank, Paddle, Naughty Girl, Bottom's Up. He flipped through them, but the only urge he felt was to take a leak.

Trotting upstairs to the bathroom his eye was caught by the tools hung by pegs on Masonite board, collecting cobwebs. He'd never used them; they'd come with the house, left by the old widower when he croaked.

A lightbulb went on over his head.

The following morning, painfully hungover, he returned to his lair, got to work. He wasn't handy by any stretch, but anyone could use a small handsaw to cut almost all the way through the top four steps. Then he collected a half-dozen Jack bottles and smashed them on the cement floor directly beneath. Wicked shards, large and small, glinted with glee. Arms akimbo, he stood back, admired his accomplishment. "Not bad! Not bad a-tall!"

Mid-afternoon, Robert was downstairs twiddling his thumbs, listening to The Fabulous Thunderbirds, when he heard Aline stomp in. Banging her shin, she tripped over the toppled bookcase, falling hard, skinning her knee.

"OW! ROBERT! WHAT TH' HELL HAPPENED?" He called up to her, "It's worse down here! You have to see for yourself! Unreal!"

"%$#@!!" she said, bounding toward the bait below. The first stair step was a doozie, she crashing below onto the broken glass and cement.

"OW! ROBERT! OW! MY LEG! IT'S BROKEN! THERE'S ACTUAL BONE STICKING OUT OF MY LEG! ROBERT! AND I'M BLEEDING! WHERE'D ALL THIS GLASS COME FROM? GAWD! I'M BLEEDING ALL OVER TH' PLACE! ROBERT! HELP ME!"

He got up from the La-Z-Boy, sauntered over, looked at her, gimlet-eyed, hands clasped behind his back, an Oswald smirk.

The Fabulous Thunderbirds played on. "Ain't that tuff enuff?"

"ROBERT! DON'T JUST STAND THERE LIKE AN IDIOT! DO SOMETHING!"

"Do something? Okey-dokey. If'n you insist, milady! Your wish doth be my command..."

"SHUT UP AND DO SOMETHING! IDIOT!"

He went into the boiler room, up and out the storm doors, leaving all the doors wide open, then to the garage where he picked up a kerosene can and a box of matches. From there, through the front door of the house, a skip in his step, past the fallen bookcase, through the kitchen, to the basement door, looking down on poor whimpering Aline. He caught her attention by sloshing kerosene down on her.

"Nothing, dear. Just pouring a little kerosene. 'Tain't no law against that, is there?"

"ROBERT! YOU IDIOT! WHAT’S THE MATTER WITH YOU!"

He sang to himself, "Oh my darlin', oh my darlin' Clementine, dum dee dum dum, dreadful sorry, Clementine," as he poured more kerosene on the steps, then flung some around the kitchen walls, splashed more on the linoleum floor, and snaked a line right out the front door. Sunlight blessing him, he crouched, lit a match, smiled. He watched the flame retrace his steps, the fire was almost invisible in the bright sun. In a few moments her screams pitched beyond frantic, then all was lost in crackling and a whoosh. But Robert was already down the street. He hoofed a few blocks to the main road, stuck out his thumb, and sang aloud, "Goodness gracious, Mama! I'm on de road, ag'in!"

One hand clutched a small gym bag, stuffed with bills in large and medium denominations, money he collected after closing their account that Friday morning. New clothes he'd pick up along the way as needed.

Robert had never learned to drive, had no photo ID other than his American Greetings employee card. His credit cards would only give the coppers a way to trace his trail, so he left them to burn. Hopefully, his bag of loot would last until he figured out something. Life as a hobo? Or beat feet in a southerly retreat and live as El Gringo in May-hee-koh? A mist of cold sweat broke under his flimsy mustache, his lenses fogged. "Jesus. How am I going to wing this?" In the distance a fire engine siren wailed, then another.

A short ride with a couple of teenage lunkheads got him to the edge of Westlake, then lady luck landed him a ride with a long distance trucker, taking him straight to Los Angeles. From there, Robert rode a Greyhound to the outskirts of LA, found a motel that'd been busy before the Interstate went in. It'd been converted to rentals in the 1980s.

He booked a room for a month. The other renters were a mix of living-dead retirees, migrant families, and lot lizards. Settling in, he ordered room service: a hamburg deluxe and a root beer, his second favorite meal when he was a kid. (First favorite was a Howard Johnson's plate of fried clams, fries, and a root beer.) Tomorrow he'd explore his new "neighborhood."

After dinner, he sat on the foot of the bed and thought about Howard Johnson's, how it was kind of a big deal back then: Sarge in a suit and tie, Mother in a dress, he and his brothers in Robert Hall sport coats and clip-ons. Then it became casual. "HoJo's." Then kaput. The great American god, Capitalism, giveth and taketh.

He watched a few minutes of TV. "I yi yi! How can people watch this crapola? Jesus."

Stripped to boxers, a yellowed t-shirt and white wool socks, he crawled in bed and read the Gideon Bible, looking for a loophole or two, until lights out a little before 10:00.

For once a nice deep slumber, jaw muscles slack. He floated in a womb-like black that seemed to stretch for joyous eternity. For once, at ease. The tic gone, for once. For once, peace. For once.

A knock at his door? Instantly wide awake he listened in the dark, sweating.

A scuffling or scraping outside the door? Muttering? The TV next door played too loudly for him to be certain. After a minute or so, three sharp raps. Robert sat bolt upright. A drunk knocking on the wrong door? The management? A pro girl? Police? He listened. Nothing for about 10 long seconds before a furious pounding.