When Dogs Run to Santa

An early, and unexpected, Christmas surprise. 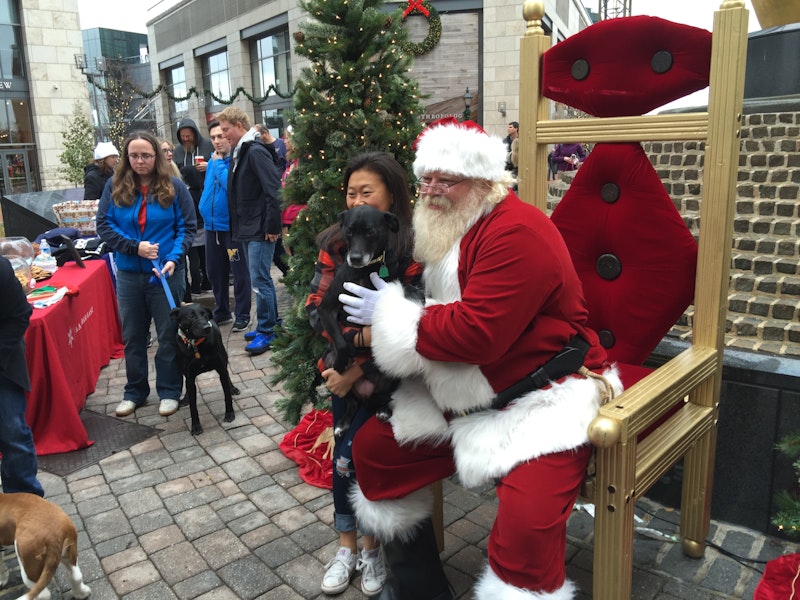 Live long enough and you let the minor irritations of modern life slide on by. Thinking quickly, George Will writing about baseball; squeegee kids at intersections in the rain; Maureen Dowd pretending she’s a Bush family psychoanalyst; Mike Huckabee and Rick Santorum; and slobs wearing t-shirts and flip-flops at tablecloth restaurants. I still get peeved when a cabbie jacks up his meter and it’s necessary, on principle, to explain that no, I’m not going to pay an extra four bucks on a well-traveled route. Perhaps that’ll evolve into a mere inconvenience one of these years, but I doubt it.

A more common refrain heard every day from Labor Day onwards, is that Christmas decorations and carols begin too early! I think that started sometime in the early 1980s, but I’m immune, and hardly even notice Rudolph and assorted elves hawking candy canes and fruitcakes at convenience stores, and colorful bows adorning light poles in the city. Nevertheless, this past Sunday—still November—I was taken aback, upon driving to the parking lot for Baltimore’s Harbor East Landmark cineplex, to see a congregation of dog lovers gathering at the center of a roundabout to get a picture taken of their hounds with Santa Claus. It was odd, I thought, and as my wife, son and his girlfriend went on a Starbucks run, I sauntered over to the spectacle to get a gander. It was actually kind of fun, and though there was an unidentifiable but awful hymn blaring on the loudspeakers, I imagined it was the Pogues’ classic “Fairytale of New York” and marveled at the participants beaming when Santa held their pups.

Because of this brief participation, I absolved myself from the hypocrisy of patronizing Harbor East, a this-could-be-any-city cluster of stores, restaurants and hotels that suck up tax incentives from a city government that doesn’t want to hear that Baltimore is a shamefully segregated city that sorely needs more than cosmetic attention in its impoverished neighborhoods. In truth, it’s not like I hang out (or loiter) at the Harbor East complex, but the family and I go to the movies often, and if a title isn’t at the more comfortable Charles Theater, we go to the Landmark.

(Brief digression: there was a very weird Frank Bruni op-ed in Sunday’s New York Times, in which the columnist gave Republican Gov. Larry Hogan—who’s fine by me—a slobbery hummer for his lack of vitriol against the opposition Democrats when they disagree on an issue. Hogan’s 62 percent approval rating, as Bruni acknowledges, has a lot to do with his arduous cancer struggle this year—he’s in remission now—but neglects to mention that Hogan (who’s largely written off Baltimore city in favor of Maryland’s suburbs) is kind of an accidental governor, an unknown who was the beneficiary of opponent Lt. Governor Anthony Brown’s foolhardy and arrogant expenditure of $20 million on attack ads, which turned voters off.)

Anyway, on Nov. 29, we were at the Landmark to see a Christmas movie, the uproarious The Night Before, a gut-buster that left the four of us in stitches. I’m not a Seth Rogen fan—though he’s not a disqualifier like Ben Stiller or Tom Cruise—but he stood out in this rude, drug-filled, suspension-of-disbelief tale of one Christmas Eve. Michael Shannon—who’s really picking up the paychecks this year—is excellent as a spacy pot dealer, as is Joseph Gordon-Levitt’s turn as a Peter Pan who can’t commit to a girlfriend. Jillian Bell, who plays Rogen’s very pregnant wife, is a scream, tossing off raunchy one-liners like an amped-up Howard Stern. In fact, I’d say this is the best Christmas movie since Bill Murray’s Scrooged (in which, besides one of Murray’s many spectacular performances, David Johansen has the Shannon role); it could even be a classic that I’ll watch again next year.

Snooty New York Times critic A.O. Scott wasn’t as charmed, writing: “You may ask: Do we need an R-rated holiday caper that wraps its gooey, good-cheer-core in layers of profanity, drug use and nervous sexual humor?” Scott’s put off by the “dude-centrism” of the “three bros embarking on one last Christmas Eve debauch.” What a spoilsport, but those who subject themselves to Scott’s reviews—I almost never do, relying on The New Yorker’s Anthony Lane—already know that.