I never got the hang of videogames. 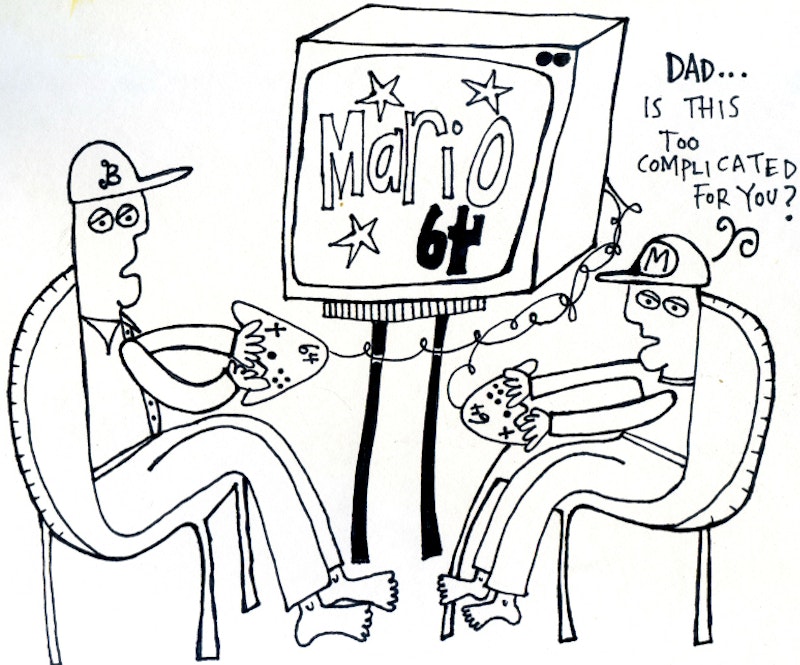 It’s difficult to recall when I first learned to read, although it certainly wasn’t in the crib, as the term “helicopter parents” was a galaxy away, and I was slated for a Long Island public school. I suppose there were rudimentary stabs at the written word in Mrs. Keebler’s kindergarten class at Southdown Elementary School in 1960-61—on the order of “See Spot Run”—although at the end of that year I did recite, in order, all 35 presidents, so something was brewing. Mostly, starting when I was six, my dad laid out the seven newspapers we received each day and told me to figure them out. Naturally, first came the comic strips—still called “the funny papers” by old-timers—and then sports scores and stock tables. (My father, in what idiots today would call a teachable moment, gave each of his five sons a couple of shares in a company, just to stoke interest. My brother Gary drew the short card, holding onto devalued United Fruit paper.)

Then it was on to Gene Schoor’s sanitized biographies of sports stars like Ted Williams, Jack Dempsey, Jim Thorpe and Mickey Mantle, followed by trips to the library for Beverly Cleary’s stories about Ramona, Beezus and Henry and other very young adult novels. I started reading The Village Voice at 10, along with the then-black & white National Enquirer—the clerk at Jim’s Stationery Store rolled her eyes at that—and eventually first cracks at Salinger, Hemingway and Washington Irving.

Fast-forward to the 1990s, and my older son Nicky, reflecting the modern world, began reading by playing The Legend of Zelda. I’d be working in my home office early in the morning, and every 30 seconds he’d call, “Dad, help me!” wanting to know what Link was saying. It was sort of a pain in the ass, the high-pitched barking from his bedroom, but of course my wife and I encouraged this activity. Nicky’s brother Booker followed the same routine, playing videogames before heading to the Upper East Side in Manhattan for school.

I’m procrastinating here, loathe to fess up—as you can see in the above illustration my wife Melissa did for one of my New York Press MUGGER columns in ‘97—that without Nicky and Booker I’d be more of a technological mess than I already am. (Granted, journalists who shifted from the typewriter to clunky computers in the mid-80s did have to adapt, but beyond the basics, I wasn’t so swift.) I would, as the illo shows, try and play along with the kids on Nintendo, but the answer to the question “Dad, is this too complicated for you?” was “No shit, Sonny!” (My patter at work—well, everywhere—was studded with what are now quaintly called vulgarities, so sometimes I slipped up in front of the boys.)

We were—and are—an Apple family, and ran through the company’s smart-looking PCs and laptops (loved the green model), and each time a new one arrived at home, it was one of the boys who took over in transferring data and putting the plugs in the right place. At the office, I employed what’s now called an IT guy, as fellow editors and the art director exchanged floppies before the whole system was networked, but at home I was lost. I remember one Christmas season when Nicky was about 11 or so, and he had specific requests for what he’d like under the tree. He’d email me links to the products, which today sounds simple enough, but back then it was torture: I had to hand-write the interminable URL and then type it in to find the destination. As there were always at least 40 characters of gibberish, I messed up a lot, since if you flubbed up on a letter all was for naught.

In the past several years, Booker’s been my seeing-eye dog: he set up my iPod, helped when a website’s new design required fancy footwork that I was either too dim or impatient to negotiate, and as far as the iPhone goes, I’d be lost without him. I still don’t know where the darn flashlight is on rectangular necessity that’s carried in my cardigan pocket.

The only consolation in depending on the boys to nudge, and nudge, me into a semblance of tech literacy is that some day, they’ll be in the same sinking boat. Hard cheese, fellas!