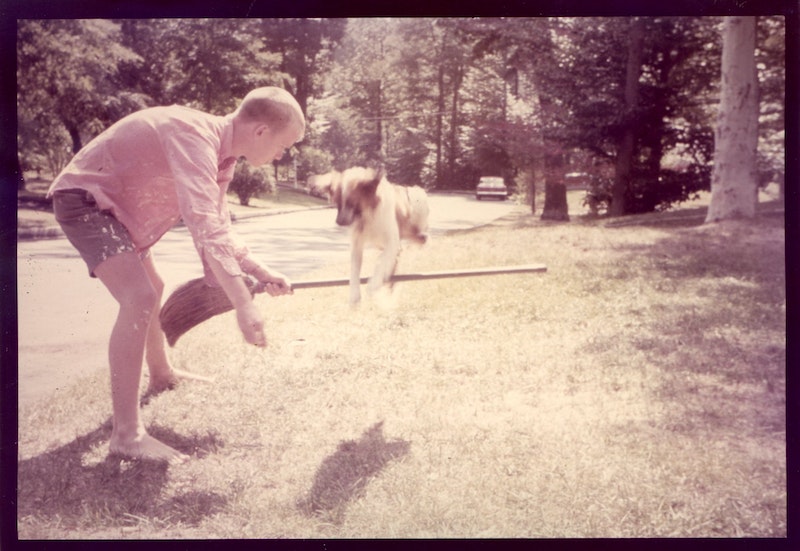 As the youngest of five boys—birthdates spanning from 1942 to 1955—I missed out on the frolics of any number of family pets. I heard stories about a hound named Pete, and there’s a picture of neighborhood dog Plut cuddled next to me as a toddler (’58), but the memory isn’t there. But one spring day in 1962, one of my brothers fetched me from the woods where I was climbing trees with pals, and relayed the astounding news that our mother had relented, once again, and we’d just acquired a mutt through a connection of the next-door Hafner family. (Unlike most of the neighbors in our Huntington, Long Island development, where all 14 houses were identical, the Hafners were both cosmopolitan and intellectual; I went to my first game at Yankee Stadium with Eddie Hafner and my two oldest brothers. Beatnik-wise Eddie always called me, affectionately, “Cat.”)

I scooted uphill to our house, jacked up with excitement, and there she was, a puppy that my brother Gary named Scuttle, since, as he explained, she was “hyperactive” and “fast-moving.” Our mom almost immediately regretted her decision when, after Dad got home from his car wash, unaware of the new critter, it was discovered that Scuttle—obviously not yet house-broken—had taken a leak on a check that was lying on the floor. Dad, unflappable, simply said, “Oh, man,” and then joined our agitated mother for their nightly martini. As it turned out, he was always very fond of Scuttle, unlike Mom, who mentally kept a ledger of the dog’s misdeeds. And there were many: biting a Spanish tutor, Senor Stamp; chomping on the leg of our garrulous mailman John; nearly killing another neighborhood dog after that Scottish Terrier had roughed up our kitten Freddy; lapping up any ice cream that was left unattended; and bolting out the front door to play in the fields, sometimes returning home with a dead mouse in her jaws.

The elderly couple across the street, for whom my brothers and I mowed their lawn and shoveled the driveway after a snowstorm, didn’t cotton to the latest Smith pet, either. One time, when she was digging holes in their fairly immaculate rose garden, I overheard Calmy Weiss (a bark-worse-than-bite sort of guy) say to Bernice Reilly, “That’s right, and they call it Scuttle,” the words dripping with utter disgust. In fact, Scuttle was so ferocious that most of the neighbors wanted no part of her, including my friends, until they got to know her. This was Scuttle’s most defining trait: she was steadfastly loyal to our family, and though her bite was worse than her bark, when one of the boys came home from school she was overjoyed and yipped and squealed and jumped all over us, as if we’d been gone for a year. Pretty cool, I always thought. My oldest brother found out about Scuttle’s scrambled personality the hard way: arriving home from college for Thanksgiving, he entered through the garage, grabbed a bottle of Schmidt’s from the auxiliary fridge, and was on his way to the ratty laundry room where he had a cot, when Scuttle blocked his entrance, waking up everybody else with her violent protests. Once assured that he was in fact a Smith, they became fast friends and she’d often curl up next to him.

There were other pets, too: Freddy and a street-fighting alley cat named Harry; big old turtles; and a menagerie of mice, Finches, hamsters and gerbils that my brother Doug kept in his room. Thinking about it, it was Doug who was Scuttle’s tutor, teaching her to jump high over broomsticks (pictured above), fetching errant baseballs and swatting her with a rolled up copy of the Daily News when finding her messing with our fairly pathetic row of daffodils in springtime. None of the rest of us certainly had the patience or discipline of Doug in this regard, but we loved to see her perform tricks.

Several years passed, and I was the only boy left in the house, and had the unenviable task of cleaning up after Scuttle, when, around 1970, she was sick and unable to control her, uh, movements. I remember one time receiving a postcard from Gary, away at the University of New Hampshire, and he joked, “So, has Scuttle been leaving her calling card on a daily basis?” And how!

It got to the point where my dad wasn’t too pleased, especially since Scuttle did her business in his makeshift business. When her liquid and chunky messes were mixed with blood, Dad took me aside (I tried to keep her involuntary indiscretions a secret from Mom), put a hand on my shoulder, and said, “Rusty, I think Scuttle’s hit the end of road.” I was in 10th grade at the time and, frankly, had bigger fish to fry than cancer-riddled Scuttle, and Dad and I took her to the vet where she was sent off to eternity. Later that afternoon, my buddy Dave Cicale and I were hanging out, listening to Van Morrison’s Moondance, and I told him of Scuttle’s demise. He was horrified, and a little pissed, that I was sort of blasé about the loss.

I’ve no idea, really, why I wasn’t more upset, since Scuttle was the most loyal pet a kid could have, but aside from a twinge of sadness, I carried on; in fact, I had no trouble consuming a double Rocky Road ice cream cone a few hours later at the new Baskin-Robbins on Main St. But I did ponder her shuffling off, and reasoned that what the hell, Scuttle might’ve lived just seven or so years, but a jam-packed run she had. And I still smile when I think of all the people who were terrorized when approaching our front door, leery of encountering that mean and rambunctious Smith mutt.