Lessons in Motherhood From a Spider

I yell at my kids, but am learning. 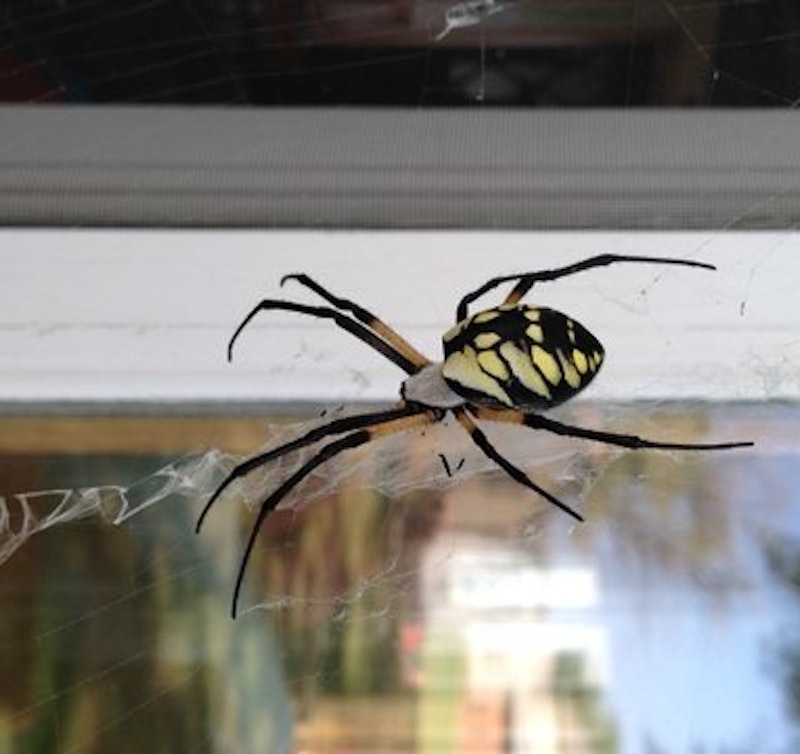 When my oldest child, now almost 20, was three, she looked at me one day, kind of cocked her head to one side and said, in a neutral-observation way: “Sometimes I don’t think you like being a mommy very much.”

It was insightful for a three-year-old, and absolutely correct. Sometimes I don’t like it. Sometimes I hate it. Of course, there are charming moments when I try to remind myself of the old saying “In motherhood, the days are long but the years are short,” because I know that’s true, but then other days, I just think “No, the whole thing is long and exhausting and I completely suck at it.”

I’m not saying I suck at being a mom as some kind of humblebrag; it’s really just accurate. And it’s not that the four kids have the worst mother alive. I try to dazzle them with stuff like fun fireside S’more making and camping, “movie night,” managing teams, chaperoning the high school band trip, leading Girl Scout troops and other random things I hope they’ll remember when they’re bitching about me to their four individual therapists. I love them. I’m just not patient. And also I’m a yeller. I apologize for yelling and try to do better, but ultimately end up telling them they should just stop doing stupid things that make me yell, like bickering with each other. Though I was great with babies, I am particularly bad at raising teenagers. The angst and the drama are draining beyond words.

There is a huge spider outside the window where I write (see my picture of her, above). I looked it up, and she has a few names besides the Latin name Argiope aurantia: black and yellow garden spider, corn spider, or my favorite, the writing spider. She is nearly three times the size of what Wikipedia says she should be, at about three inches high. She’d cover most of the palm of your hand. I’m not particularly scared of spiders, but I get the feeling she’d jump on my face and eat it if I pissed her off.

One day, I noticed she was gone from her huge four-foot high web, and it was torn apart. I figured she’d been eaten by a bald eagle, though my money would’ve been on the spider in that showdown. Then I noticed her on a nearby window, crouched over what was obviously her egg sac. About the size of a golf ball, the nest secures a future scary spider generation. But she looked terrible. Once fat and strong and powerful looking, she appeared frail, weak and thin.

Yep, I thought, that’s what it does to you.

I figured I’d look in a day or two and she’d be gone, her corpse devoured by a frog or bird or whatever eats dead spiders. I felt sorry for her. She gave her life for her kids. She spun that enormous web, caught dragonflies and horseflies and wasps and wrapped them and ate them to get strong so she could deliver her babies, for whom she built a solid home. They’d fly out of that nest on silk strands in no time, never looking back, certainly not appreciating her. Even as she lay dying, still protecting them, she did her best to give them all she had. Her once-gorgeous web hung in tatters.

Then one day, about a week later, something strange happened. I saw her, in a brand new web, even more intricately woven. She was wrapping up a giant horsefly, and in fact devoured it in the time it took to ride a bike to the country store for lunch. She looked bright and healthy and strong again. The nest was still there, but the kids were left to fend for themselves.

It was like she was telling me not to let motherhood suck everything out of you because one day, you’ll get your strength back in an even better place.