The Genius and the Jupiter Plaque 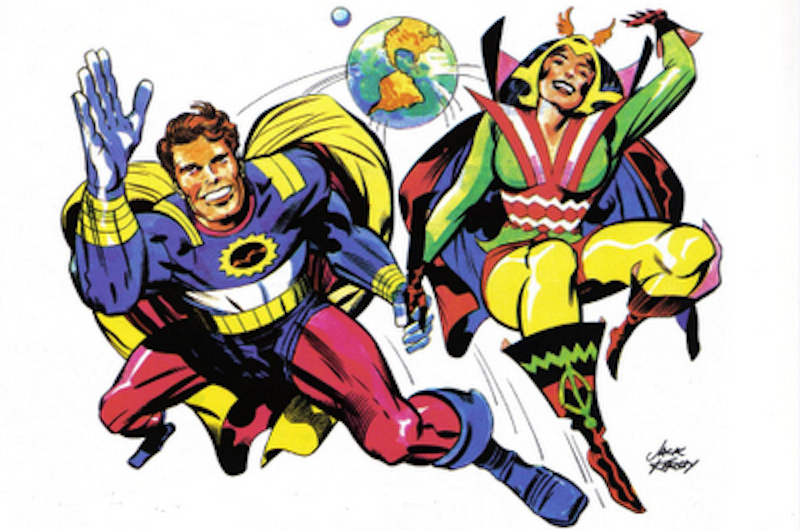 Jack Kirby invented or co-invented most of the characters you see in those movies about Marvel superheroes. He thought them up as he drew, and he created so many of them because he was a visionary. Visions didn't just visit him, they invaded. He couldn't drive a car because he was too preoccupied. His wife drove him or else one of the kids did it, one of the shaggy young baby boomers who used to follow him around back in those far-off days when Nixon was president and the Beatles had gone solo. “You can drive my car anytime,” Kirby would say to a beaming young man, and it was a mark of affection and trust.

Because he drew comic books, the press didn't pay much attention to Kirby. But one time The Los Angeles Times asked his opinion about a public issue, and as a visionary he came back with an almost perfectly useless comment. The fault wasn't his. He was making sense, but no sense was called for. Everyone else knew this and he didn't, but that's to their discredit and not his.

The topic was Pioneer 10, which NASA had just launched off the earth and onto a trajectory that would take it past Jupiter and, after a very long time, possibly bring it within range of alien life, if any. The probe carried a plaque, not a big one, inscribed with data about the human race: that is, drawings of a man and woman (both of them white, and the man with blow-dried hair), and a lineup of symbols that could act as a road map back to earth, the probe's source. Wikipedia says the plaque was the idea of Carl Sagan, a gusty promoter of space and its possibilities; he had hair that was like a dark version of the hair found on the plaque's human male.

Kirby sent the Times the drawing (above) that he wished had gone on the plaque. This was a pair of human specimens, man and woman, who looked like their health had kept growing and bursting until they had transformed into Vikings who now wanted to evolve further and become Baroque fountains. They had giant capes and chins and ornamented fronts. They were superheroes that Kirby had made up for the occasion, and a round earth floated behind them with North and South America stamped across its face.

What he did not show was a trail from the probe back to our planet. The aliens would have to figure that out by themselves. Kirby expanded on his views in a written statement he sent along with the drawing. “I see no wisdom in the eagerness to be found and approached by any intelligence with the ability to accomplish it from any sector of space,” he told the Times. “In the meetings between 'discoverers' and 'discoverees,' history has always given the advantage to the finders. In the case of the Jupiter plaque, I feel that a tremendous issue was thoughtlessly taken out of the world forum by a few individuals who have marked a clear trail to our door.” Kirby said he favored giving the aliens “a rough image of the earth and its one moon,” but that was it, nothing more.

He was right. I'll expand on his point. Aliens who can come to earth will have better technology than we do. Therefore, we'll be in great danger from them; look at earth history and the contacts between Europeans and the people they found on various continents. No, we don't know that the hypothetical aliens would follow the same rules as earth history. But we don't know that they wouldn't. Therefore, we sit and wait to find out if, who knows how far along, some being will discover Pioneer 10 and either destroy our civilization or give us a break.

Our saving grace is that nobody believes aliens will find Pioneer 10 (or Pioneer 11, which has the same plaque). Because who knows if aliens are out there, and who knows the odds they'll hit on the one piece of space where Pioneer just happens to be? The gamble is no gamble—nothing is going to happen. An exercise like the plaque on Pioneer 10 is the equivalent of humanity combing its hair before a date that it knows won't take place. Humanity is doing some pretend. The plaque is a gesture, an emblem of how humanity (or Carl Sagan) would like us to feel in the face of the open, endless universe. That's the sort of thing adults think about, not the odds of an invasion by aliens.

Kirby didn't get the word, so he thought practically. If a space probe aimed at alien intelligences wasn't basically futile, then it had better be careful about giving out info. Kirby was an oddball in some ways, but on this issue he made sense.