A Dad's Observation: Heroes to the Side

How I became a spectator. 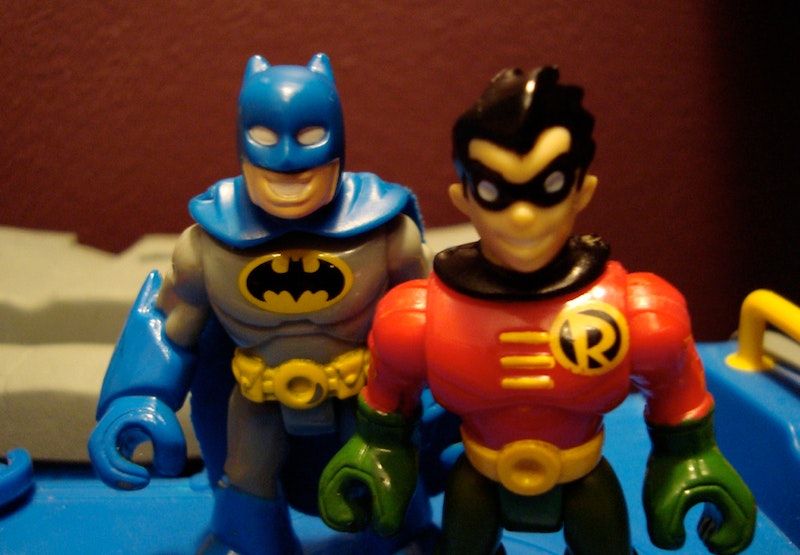 It all started with Robin, honestly, and I should have seen if coming. Robin, after all, is the certifiably youngest member of the Justice League—as determined by the DC action figures owned by my son, Nodin—so it was perhaps inevitable that he would become an avatar of sorts. Suddenly it was Robin volunteering for dangerous spy missions wherein he would lurk outside of the Gotham rogues' gallery HQ with sensitive recording equipment in order to ascertain their next moves. Suddenly it was Robin with an inventor's workshop in the Imaginext Bat-castle. Suddenly it was Robin busting out security systems and high-tech doodads. Then Robin went all Bubblegum Crisis on us, erecting a gigantic, color-coordinated robot which the Justice League could dispatch to fight crime on their behalf, rendering themselves irrelevant in the process, and then shortly thereafter the Justice League's enemies retaliated with a well-armed robot of their own. Thus, the transition from "playing figures with Nodin equating to vigorous fisticuffs with small plastic comic book characters" to "playing figures with Nodin equating to two large robots smashing one another to bits" is complete: unwittingly, dear reader, I am no longer a participant, but a glorified observer.

As chronicled some months ago, the nature of play with Nodin is constantly morphing and changing, but until recently there was a certain give and take to our interactions. There was an unspoken understanding that I was to contribute to furthering various plotlines and smash skulls together with brio, and that I was to cease doing those things when he came up with some inventive maneuver or other and pay attention, and that regardless of whatever non-DC paradigm he introduced to the situation, there would be at least the illusion of interaction, or tableau overlap. But now that the robots are the main attraction—robots Nodin controls. Any actions I might take with the figures are wholly ancillary to what the robots are or are not doing, and are not of interest to Nodin or the robots, whose inclination is to blast the figures with missiles or cannons before returning to the heavy metal bruise cruising. So I offer advice and my services as a gopher for plastic blocks and rebar; my entreaties are rebuffed, as my real role is as the audience, present to gasp at explosions and offer non-binding commentary when the bots get bored with violence and decide to see who can transform into a better house; to listen when Nodin enunciates "cool" as though it has 15 "O"s and is now the most awesome thing anyone can say about anything, ever.

The edge of superfluousness is a weird place to find oneself. I look over at my son cobbling together entire universes and realize how big he's gotten, how tall and sure of himself. I can barely lift him up now—sometimes he'll let me try still—when once I carried him for blocks and blocks; he can read without me and, usually, entertain himself. It shouldn't feel like a miracle that I can continue to be involved, even in these somewhat peripheral ways, but it does. Most of the time he's resistant to my ideas about what we could do—soccer, throwing tennis balls over trees (a new favorite), a trip to the library or a discussion of gem stones—but he's as liable to say no as to say yes, and either way it's a gift. I love this kid.