Every time she fills out a form... 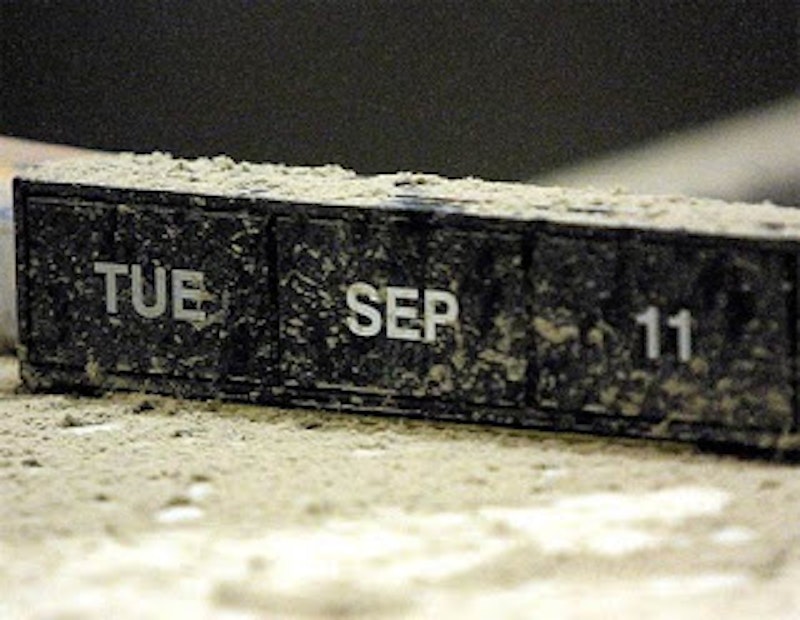 A lot of the minority experience would appear to be this: People say the same stuff to you over and over, and so much of it is personal but doesn't take you into account. Take the girl who was born on September 11, 2001. Every time the girl has to fill out something in an office or a store, she gets people staging five-second dramas that she has to take part in.

Apparently she snapped. “Last week,” writes the girl's mother, “when signing up for a rewards program at a bookstore, the clerk said 'That was such a sad day,' and my daughter responded, 'I can't help the day I was born. By now everybody knows what happened on September 11. I don't need to be reminded.'" The girl revealed later that she feels “guilty” about bringing to mind such an awful event; having felt guilty for a while, she's now getting resentful.

The woman describes the scene in a letter to Prudence, the Slate advice columnist. To my mind, the letter takes a minority viewpoint. The issue, as the woman sees it, is that her daughter's perspective should hang in there alongside the mass perspective; it should not be eclipsed. Looking for a “quick phrase” her daughter could use, she came up with, "That day affected everybody differently." After all, her girl was born that day, so that does make it different for different people.

Prudie's answer: “All she has to do is nod or say, 'I know what you mean,' and move on.” You'll see that Prudie doesn't bother with preserving the minority viewpoint. But for the girl's situation, her advice is good. What people are looking for, when they drop a quick remark about something famous and tragic, is an equally quick acknowledgment. People are just touching base, reminding themselves that we all know and care about this one thing, whatever it may be (for example, 9/11).

But that simple little pat, repeated over and over, can drive some poor soul up the wall. No harm is meant in it, and it involves no memory of past harm done to your kind. In fact, if you're the 9/11 girl, you don't belong to a different kind. This is your whole experience of being singled out by the majority, this little business of filling in your birth date and listening to a platitude. Even so, it's a drag inflicted on you by the majority's refusal to think.

Imagine if the trigger were your race and if the touchstone, the something that everybody knows, weren't the dreadfulness of a remote event but a supposed fact about yourself, a thing everybody thinks they know about you or your family or your challenges in life. Still no harm intended, but my God.

Is this cute? From the bylaws of my new apartment building (you sign them along with the lease): “The only thing that can go into the toilets comes from the Tenant's body, or toilet paper.” A friend pointed out this would mean tampons were okay; probably the rule should say “products of the Tenant's body, or toilet paper.” At any rate the next sentence hammers away the ambiguity. “Nothing else,” it says, “no paper towels, no feminine hygiene products, plastic bags, or anything else.” I have no idea who wrote it; the landlord is a company, not a person. But the document sounds put upon.

A sentence from the Internet: “And in my reporting, I know from people at Comedy Central that audiences interrupting his stand-up with Rick James quotes was a serious concern of his.” It makes sense in context, but what a context: us, now. People chanting quotes out of Rick James. Jesus would weep but he's cutting his toenails.

New clichés. I just saw The Sitter on Netflix. It's a comedy for high school kids, I guess. Jonah Hill plays a mouthy college-age guy who can't get it together. He winds up in charge of some junior high school kids, poor little rich kids, and he straightens them out and everybody saves each other. Characterization and pacing are highly streamlined.

“You're going to be real organized and smell good,” Hill says to one of the kids, a mopey little boy with full hair and an elegant profile. The kid's parents have the poor sucker on pills, but come on. All he has to do is face who he is. “You're gay and there's nothing wrong with that,” Hill says.

Is this a thing nowadays, straight guys in movies explaining to gays that they're gay and should get with the program? Seems like it would be, but I never saw it before.