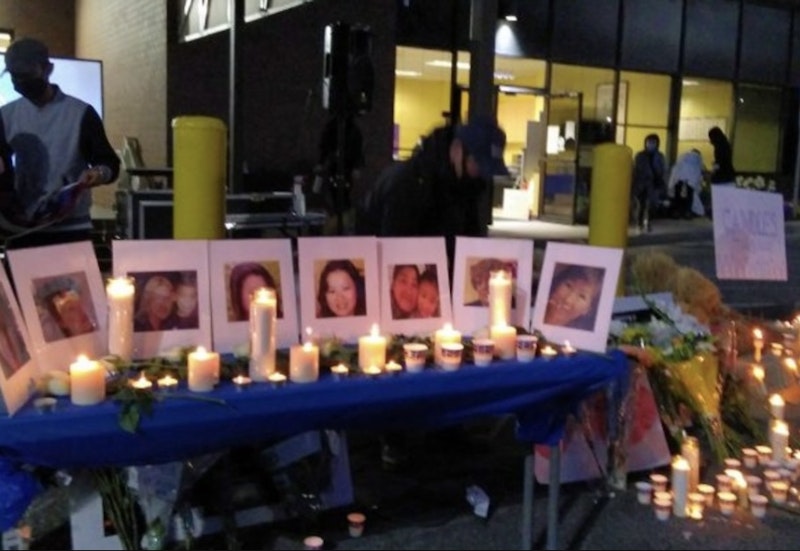 The New York Times reported on March 22 that the recent mass murder of eight in Atlanta, which included six women victims of Asian descent, "touched off calls to stop hate crimes against Asian-Americans, which have been rising during the pandemic." In fact, it hasn't yet been established that this was a hate crime targeting Asians. The tragic irony is that anti-Asian hate crimes, often perpetrated against seniors, have been "rising" for a full year now, but it took a murderer who perhaps wasn't even targeting Asians in particular to shine the spotlight on the issue. And it's an issue that the media—including the Times—has no particular interest in shining the light on too brightly, because that would cause them, and others, to experience discomfort.

The reason for the media's lack of interest—until now—in hate crimes against Asians starts with the fact that Asians—who progressive hero FDR imprisoned wholesale as a "precautionary measure"—are essentially non-entities in the U.S., even though they're officially classified as "people of color" who should be entitled to victimhood status.

A 21-year-old white man, Robert Aaron Long, is charged with eight counts of murder in Atlanta, but he told police that he wasn't targeting any particular race. He said he had a sex addiction, and that made him want to kill female sex workers—perhaps workers at establishments he'd frequented in the past.  Generally, the media accepts a mass killer's explanation for his motivation, and generally these killers are eager to admit the racial animus behind their crime, but in this case the suspect's own words don't match the media narrative, so they're discounted, because the narrative always takes precedence over facts. In the aftermath of this tragedy, the media welcomed observers with no particular insight into Long's twisted mind to "explain" his behavior, producing plenty of empty-calorie junk food for the mind.

A story that USA Today ran on the Atlanta massacre—"Who gets to decide what is racism, hate? Atlanta shootings renew debate over white violence, privilege"—pinpoints the curious way the media now determines whether or not a particular incident was race-motivated. While the article acknowledged "pushback from authorities and critics on social media who insist on waiting for the evidence" (how old-fashioned), it gave equal footing to the "many" to whom "the killings were clear acts of racism." Notice the use of the word "clear," as opposed to "suspected," even though the perpetrator denies it and the facts aren't in yet. Not one of these "many" had even one fact-based insight into Long's mentality.

The USA Today article spells it out with this observation on all of the instant "experts" weighing in: "But the evidence, they thought, is in our experience. Experience reflecting centuries of white supremacy." "Lived experience" is now considered "evidence" of a crime, and the media runs with it because everyone's become entitled to their own reality. It's irrelevant to the media whether or not Long had any actual animus towards Asians, which is convenient because it makes it much easier for them to do their jobs. Why go to the effort and expense of investigating Long's intentions when all that's required of them is to report on people's feelings and hunches?

If you're not convinced, read this from the same USA Today piece: "Despite what they saw with their hearts and minds, those who perceived the Atlanta killings as the crescendo of a year-long wave of anti-Asian violence sensed the event would instead be defined by the same white-dominated institutions that always called the shots." They "saw" something with their "hearts"?

The "crescendo of violence" comment leads us to how dishonest the media's been in reporting the spike in hate crimes during the pandemic. If the Atlanta killings were, in fact, the extreme culmination of a series of violent events—and there's a good chance they weren't—then where was the reporting on all those street incidents that would've warned us of the storm that was brewing, and where were all the New York Times and Washington Post op-eds on the topic? You can be sure that the Times' Charles Blow didn't go near the story.

I haven’t yet been able to identify a single anti-Asian hate crime committed by a Trump supporter, despite the Democrats' insistence that Trump-loving racists are the main perpetrators. What I did discover, however, was something the media refuses to report. Consistent with the U.S. Bureau of Justice data that was compiled until 2018—Asians are now lumped into the "other" category, a suspicious decision that merits investigation—black males are the main perpetrators of the pandemic's anti-Asian hate crimes, and there’re videos supporting this claim that the media isn’t going to show you. The media's problem is that, under the current progressive definition of racism, blacks can’t be racists because, as a group, they have no power. Since reporting that black males are committing race-based violence against another minority group runs counter to this narrative, the media finesses it by not mentioning the race of the assailant if he's black.

It's not racist to point out who's committing these hate crimes—data can't be racist. Anti-Asian hate crimes were up by about 150 percent in 2020, so it's a serious problem that needs to be addressed head-on, not danced around. But what we'll get are more articles like the one Yahoo News ran in February, "Anti-Asian violence has been rampant. Here's why it's not always a 'hate crime.'" Suddenly, the media wants to make sure we don't exaggerate a specific hate crime problem. The authors of the piece say it's important to use "precise, accurate language in discussing" anti-Asian violence. In other words, use precisely the opposite sort of language progressives use when attributing an incident to "white supremacy."