Dancing During the Plague

Exorcism was a remedy for many suffering from dance mania. 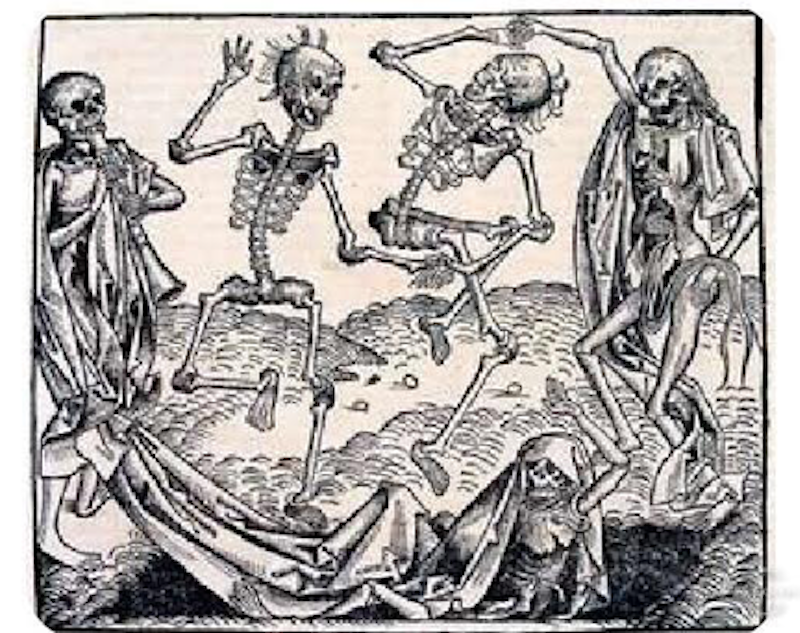 In 1518 in Strasbourg's small French village, a local woman named Frau exhibited peculiar behavior on a summer day. Townsfolk observed her dancing in the streets until collapsing from exhaustion. Only to recover and continue her frenzied gyrations the next day. Other people in the town began to dance uncontrollably too. A sort of free-form frenetic rumba line consumed all. It was a medieval Rave party. Officials and religious leaders decided that the only solution was for more dancing to quell this bizarre public display of sweaty herky-jerky physical exertion. They opened dance halls in large barns with live bands to accompany the frenzy. At its peak, as many as 400 people joined in this oddball aberration that lasted through that summer until September. There were other occasions where these unexplained happenings occurred in Europe's middle ages.

The prevailing theory was that the rye in baked bread contained a fungus known as Ergot. It was the culprit responsible for this mass delusion two-step cakewalk. It was a dark-age psychedelic, like the modern version of LSD, X, or MDA, the acid-like amphetamine. There are numerous examples throughout recorded history of strange phenomena related to unusual dancing. Whether attributed to a combo of demonic possession, epileptic fits, psychedelic stimulants, or in concert with the patron saint of all dancers, actors, and the like, Saint Vitus had his style of getting down, shaking a groovy tail feather.

A medical diagnosis like cholera, venereal diseases, and other deadly infections was a mystery centuries ago. The afflicted went crazy with hypnotic mass hysteria. But there are other forms of popular delusion and unknown diseases too. During the Great Depression, the dance marathon became all the rage across the country to win cash prizes. The participating couples would dance for days, weeks, and sometimes months until the last team standing would be declared winners. This dance till you drop fad often led dancers to the emergency room and occasionally the morgue, collapsing from dehydration, heart attacks and seizures.

The term “They shoot horses, don't they?" was from a novel published in 1935 describing people's desperate tribulations during the Depression-era. Many hopeful folks, young and old, entered a dance marathon for a cash prize of $1500. The film adaptation premiere in 1969 was faithful to the original storyline. The tale's title pertains to shooting a horse or killing any poor suffering creature to put it out of its misery. In this case, a character in the story was unbearably suicidal and had given up the will to live, mindlessly dancing her little heart out. It's unbelievable just how far folks will go to achieve a perceived goal. Whether it’s joyful children dancing to follow the Pied Piper or the devoted faithful of Saint John the Baptist led to divinations afterlife. The tarantella, a courtship dance made famous in Italy, was caused by tarantula spider bites. Scorpion venom was believed to induce dance-like tremors. Exorcism was a remedy for many suffering from dance mania.

Whatever the cause or cure for these disorders, the purpose of suspending perceived reality assumes we seek meaning in shared manic depressions, separating disbelief in the facts, giving nonsense a second chance where essential truth holds no evidence. The nature of these psychic epidemics permeates the world's cultural divide. Mania drives the masses over the edge as isolation gives birth to fear and depravity. People drink too much and jump into the sea. Cults can spread vicious conspiracy theories. Lawmakers abuse power. Hate pervades every home. Perversion creeps about, cavorting in skin-tight latex suits on stiletto heels. Whips and chains for the merciful. Some self-flagellate while others run about naked, jumping over funeral fires, indulging in public fornication. Scoundrels and chuckleheads sell shoddy goods, almost as defective as their own bald-faced lies. The public is fucked. Evil parades around piety disguised as sacred religious zeal. Nailed to crosses, hanging from poles of false flags, and culture canceled. Faith is indistinguishable as falsehood rules.

Many fall by the wayside, diminished by their own respective disbelief. Stir crazy and distracted by the spectacle. Sideswiped by an asswipe in life’s parking lot. Inexplicably interconnected to some cosmic umbilical cord of life. In constant flux, we vibrate and hum through the wires, floating around in waves of sound. Furiously pulsating in multi-dimensional whispers into an embryonic ear.

Breathing air surrounds us in unpredictable dimensions. Like apples falling from the tree of clockwork time. Dominoes floating in space like tumbling dice rattling bones. Gravity’s not our friend. Wearing another mask to cover all those other faces. We've been duped. Excuse me, may I have this dance?