Reflections on Four Years of Homeschooling

Some thoughts on the four years and six grades spent at my most prestigious alma mater. 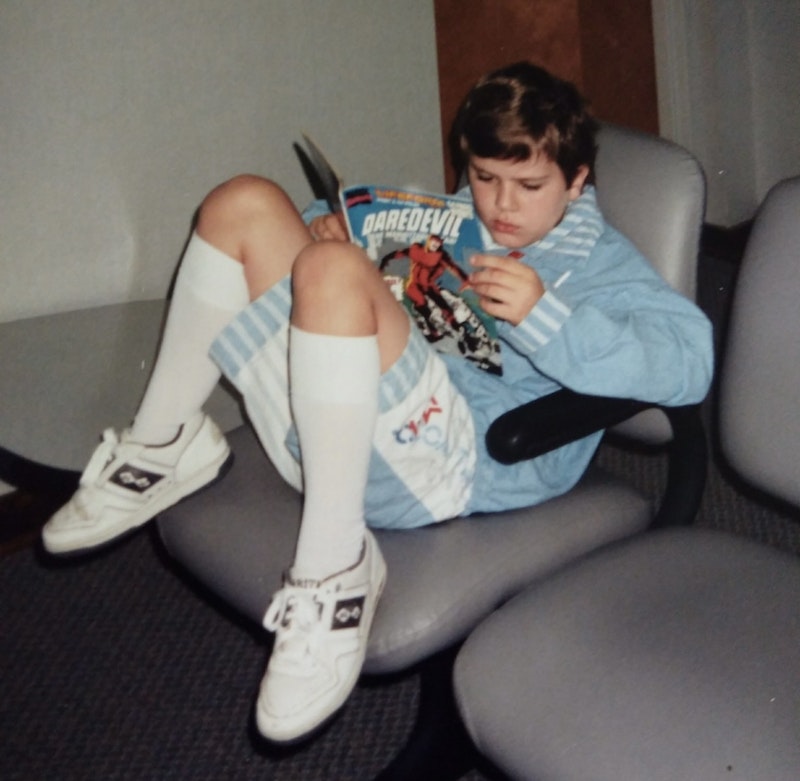 1—In January 1990, I left Pines Elementary in Plymouth, North Carolina—where I’d been enrolled in the second grade, and where my mother worked as a fourth-grade teacher—and entered a period of home instruction that encompassed four years and what the American public school system classifies as grades two through eight. My mother kept her day job and her all-important insurance benefits, and my father worked at his car dealership six days a week, so from seven a.m. until four or five p.m., I was left to my own devices in our sprawling ranch house.

2—While living by my lonesome, I maintained a simple “latchkey” schedule. After eating breakfast, I played video games until noon, and then, following lunch with my father—usually hot dogs from the “Little Man” fast food restaurant next to the car dealership—I sat on the couch in the living room and completed my schoolwork. I usually finished that in two or three hours, after which I would read old wrestling magazines, comic books, and pulp fiction of various sorts until my mother came home and cooked dinner. “Real” school, during which she went through a series of lessons with me, lasted from six p.m. to eight p.m. I then returned to consuming a steady diet of garbage literature until falling asleep in my bed or on the couch, but in any case no later than 11 p.m.

3—Now you have the nuts and bolts of it. However, the anecdotes related to this lazy stretch of time take us to the heart of the matter. Time has turned them into fables, parables, allegories, what have you. Time turns nothing into something, then back again into nothing, “s'il vous plaît.” “Like sands through the hourglass, these are the days of your life,” my father would intone several times per week, echoing the introduction to his favorite soap opera. “It’ll never get any better than this, and it’ll never get any worse.”

4—I accompanied my father to work once or twice a week, and while at the dealership I’d listen to him propound his half-baked theories related to sales, marketing, athletics, and human behavior. Once, he had me observe as he “horsed around” with two of his employees, a 6’6” former small-college basketball player he referred to as “Cabbage Head” or “Cabbage” and an ancient, toothless mechanic everyone knew as “Happy.”

Both “Cabbage” and “Happy” were slow on the uptake, a quality my father, who prided himself on running the entire Chrysler dealership with zero assistance, prized in his subordinates. The two of them were aware of their favored status and competed for his attention. “Take a look at these two sons of bitches,” my father told me. “Neither one has ever even had a second thought.”

“I ain’t even had a first thought,” “Happy” replied, eager to further distinguish himself.

“Cabbage,” realizing that “Happy” had thrown down the gauntlet, offered a rejoinder. “I’m a hell of a lot dumber than he is. You know I can’t hardly read.”

My dad nodded at me. “He’s right, son. ‘Cabbage’ couldn’t read a word to save his life.”

“Couldn’t read none to end it, neither,” Cabbage added proudly.

5—Most of the homeschool children from this era, and likely right up until the beginning of the COVID pandemic, were homeschooled for religious reasons. Many of them, particularly in the so-called “Tidewater” region of Eastern North Carolina, were Evangelicals, “Jesus freaks” if one were to refer to them in a derogatory manner, which I never did because we made a small fortune selling panel vans to their pastors. In any event, I didn’t attend public school, rarely left the house, and my family drove an hour each week into Greenville, North Carolina, to attend what my mother called a “normal mass” overseen by a “proper priest”—in her opinion, the sort of soft-palmed, soft-voiced, and soft-chinned fellow who looked like a stuffed teddy bear in his vestments but mustn’t be invited into the home much less let near the “boys or the livestock”—so I saw little of these Holy Spirit-infused folks during my youth.

However, in 1992, about midway through my four-year term of homeschool, my mother had the bright idea that we should attend a “homeschool convention.” It was “high time I began talking to boys,” whatever that meant, and this would serve as a good chance to meet these “boys.” She also hoped to talk to other credentialed educators about their pedagogical approaches. She assumed that the other homeschoolers would be immersed in interesting curricula, projects such as “using the city as a campus” or undertaking “experiential biology” in the ways that she had me doing it, which involved the two of us using needles to pin still-living bees, waterbugs, and other creatures on a felt collection pad, or me cutting up small snakes, big spiders, dirt-covered earthworms, and unfortunate birds with a kitchen knife. All healthy “boyish” activities, to be sure—“boys will be boys,” she never tired of saying, and “boys have to get their hands dirty.”

When we entered the Holiday Inn conference area, we were crestfallen. There were a handful of booths, most touting strange Bible-themed textbooks, computer programs, and even Nintendo games—mainly Old Testament stuff, a subject I perceived only as a “vade mecum” containing wise sayings and saws, but literature they took quite seriously, as evidenced by all the beefy, bearded depictions of Moses, Abraham, and Noah the vendors were displaying. The food, Carolina-style BBQ from some local joint set up to be served buffet-style, wasn’t bad, but everything else looked cheap and shoddy. I recall many of the bulbs in the ceiling flickering, a sign of ballast issues no one cared to climb a ladder to fix. Improved illumination would only have revealed how many winged insects had met their bitter ends within those poorly-lit starvation chambers, anyway.

During the hour we remained at the “convention,” we attempted to mingle with the other attendees. Approximations grow foggier and less reliable with the passage of time, but there couldn’t have been more than 50 people wandering around at any given moment, not counting the dozen or so vendors working the booths.

My mother struck up a conversation with a family that likely struck her upon first impression as well-heeled: the mother was dressed in an exaggeratedly modest way, with big wooden clogs and a hoop dress that hung down to her heels, and the chubby-faced husband and four chubby-faced boys all parted their hair in the middle—perhaps the or least a style during the early-1990s, though I can’t say for sure—and wore matching cornflower blue bow-ties, short-sleeved button-down shirts, pants so pleated they seemed to almost double over on themselves, and suspenders the boys kept snapping in a jaunty way.

I don’t recall much about the family except the boys’ repeated snapping of those suspenders and how the five of them talked in a squeaky, affected way, their speech floating away into higher, softer registers as they concluded their sentences. They all seemed exceedingly soft and squishy, the sort of folks about whom my father might remark, “cookies, cookies, punch a hole in them and they’ll all be donuts.”

At some point, the talk turned to instruction—my mother was monomaniacal in the advancement of her goofy, ever-evolving “progressive” ideas about education—and the boys’ father remarked that dance was a critical component of his family’s daily lessons. He then offered to demonstrate alongside his four boys, while his wife favored my mother and me with a song.

My mother agreed, possibly because we were in an otherwise-empty part of the room and possibly because, since she had no intentions of ever seeing these people again, assent seemed the polite thing to do. The wife then began singing a surprisingly on-key song about Salome dancing before King Herod in order to win the right to ask for John the Baptist’s head on a platter, a reference I understood, albeit dimly, because it was described in the New Testament. While she narrated this story, the father and his sons danced a slow, provocative number, thrusting their hips and bellies in and out, in and out, undulating gently like the country lanes of Northern Ireland.

Whether their performance continued for seconds, minutes, or even longer is now unclear to me. As this spectacle unfolded, I recall thinking about the comic books and wrestling magazines I read each day. Surely that, not this, was real life. Surely this wasn’t our reality, this moment I was sharing with the dancing family. If it was our reality, what did it all mean? I suppose you had to be there. Even if you were, as I was, you probably would’ve wandered away into some hazy daydream, never believing a thing.