The Hush-Up of Anti-Asian Hate Crimes 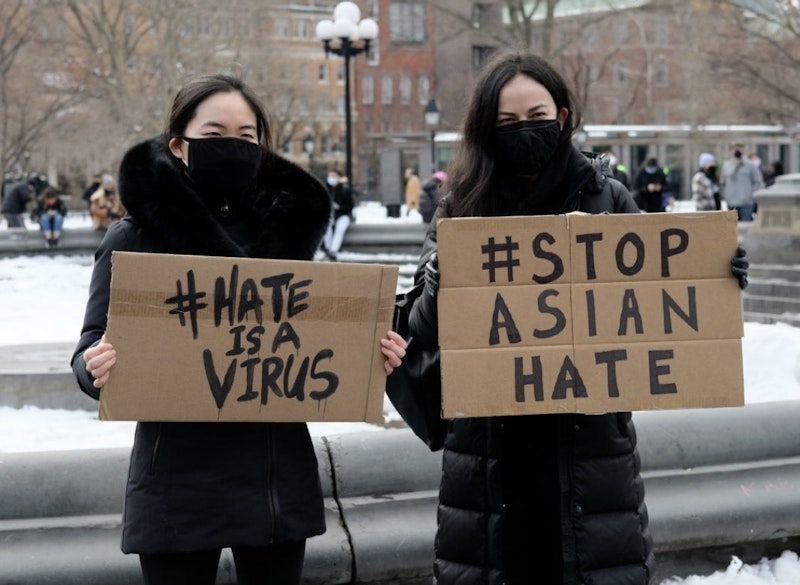 On March 4, CNN ran an article on the recent spike in unprovoked violence against Asians. Videos of the attacks are all over Twitter. I've watched a lot of them, and can't remember even one having a perpetrator who wasn't a black male. It's obvious who the victimizers are, but Harmeet Kaur, writing for CNN, didn't touch on the taboo topic. The media hates covering this issue, but they have a duty to bring the problem to light so that solutions can be discussed. That would require courage, as it might hurt someone's feelings. If you're holding back on your reporting of facts because of fear you'll be falsely accused of being a racist or "anti-black," change careers.

Kaur brings up the case of Noel Quintana, a 61-year-old Filipino-American who on February 3 was slashed across his face with a box cutter on New York City’s subway, but the writer includes no information about the attacker, which is often a tipoff. I checked it out and found he was a black male. In the headline it says that the history of violence against Asians is "complicated," so addressing it will be complicated. The problem doesn't look complicated. There appears to be a lot of resentment towards Asians in the black community and some are acting out on their prejudice. The media presumably thinks it's being responsible by reporting on anti-Asian hate crimes without specifying the race of the attacker, but that’s incompetent and complicit in covering up a serious problem. Are they worried about "black fragility"?

Time reported that on Jan. 28, 84-year-old Vicha Ratanapakdee was shoved to the ground while taking a morning walk in San Francisco. Two days after the assault, he died, and Antoine Watson was arrested for murder. Time didn't mention Watson's race—he's African American. The same article reported on the video of a 91-year-old man being pushed down in Oakland's Chinatown, and a man named Yahya Muslim (race not specified) being subsequently arrested. A Google search revealed that he's black.

As for the cause of these hate crimes, Time writer Cady Lang offers a useless, anecdotal observation: "Many attribute the 2020 uptick to the xenophobic rhetoric of Biden’s predecessor; former President Trump repeatedly referred to COVID-19 as 'the China virus,' blaming the country for the pandemic." We're supposed to believe that the urban, black males committing these violent acts out of racial animosity have been influenced by Trump's rhetoric? They don't exactly fit in with the demographic profile of his supporters, but just hearing him say "China virus" incited them anyway? That's not likely.

Lang's only mention of black males was to point out the criticism that actor Daniel Dae Kim received for tweeting a video showing Yahya Muslim shoving a 91-year-old man to the ground and offering $25,000 to anyone who could identify him. The article contains this quote, directed at Kim, from someone named Kim Tran: "Listen, if you don’t understand why it’s problematic to offer 25k for information about a Black man in Oakland, I need you to stay off all the goddamned panels. This looks a lot like a bounty on a Black person funded by Asian American celebrities." It looks like a bounty? Bounties are paid to capture and deliver someone, not for information that will bring a violent criminal to justice.

It shows how twisted things are when a social crusader gets more upset about a concerned Asian spending his own money to see that a bad person gets held accountable than by the hate crime that person committed. Tran is trying to protect a violent, racist criminal. Asians trying to stop these bias crimes are part of the "problem" that Lang writes about: "How to tackle anti-Asian violence without relying on law enforcement institutions that have historically targeted Black and brown communities." That's a separate problem. This problem is African-American males targeting Asians, and if you don't want the police involved to keep Asians safe, then that's going to entail citizen patrols, which are probably coming soon. If one of those concerned citizens gets overzealous and finds himself in a George Zimmerman/Trayvon Martin situation, let's see what Cady Lang thinks is the problem.

Last September, a group of eight youths at a Harlem subway station administered such a bad beating to a rising jazz pianist from Japan (they called him a "Chinese motherfucker") named Tadakata Unno that he can no longer use his right hand. None of the bystanders helped him. Had Unno been a black victim of a hate crime, this would've been a huge media story, but it was mostly ignored. Although the attack was caught on video in the subway station, The New York Times reported on it with no mention of the race of the attackers, some of whom were females. I checked out several other media reports on the incident and there was no mention of race in them.

Because Asians are now, for some mysterious reason, lumped into the "other" category, the last Bureau of Justice data that breaks down violence against Asians by race of the attacker was for 2018, when blacks reportedly committed 27.5 percent of the attacks on Asians—more than any other group. After the recent spike in anti-Asian hate crimes, this figure must be up significantly. But the media and the Democrats aren't interested, so watch for Asians to continue their trend of voting GOP. It's a shame that we're not a mature enough society to face this problem head-on instead of pretending Trump caused it, and progressives are to blame. Asian lives, which are part of the POC "community" progressives pretend to champion, simply don't matter to them, even though they're big on BLM. The Democratic Party deserves to lose their votes.