No Baseball For Me This Year

The game is a metaphor for the American neoliberal order. 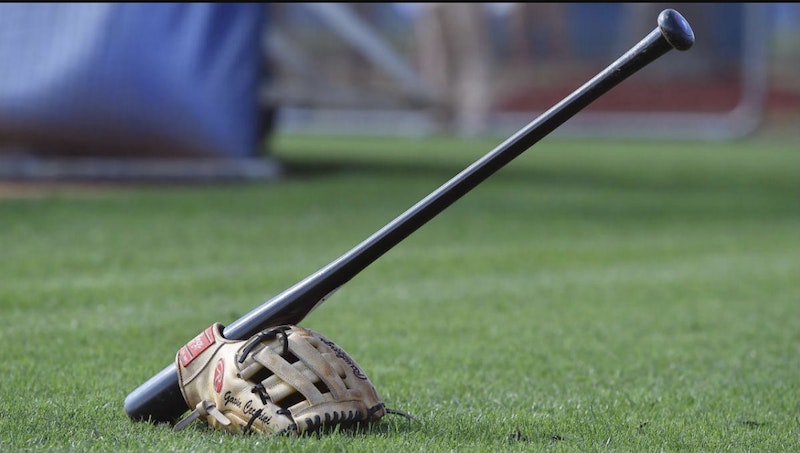 Opening day beckons, but I will take scant interest in baseball this year. The game, which I used to like as a nice pastoral counterpoint to football—which, as an exercise in violent territorial conquest, is, appropriately, the real American pastime, alongside persecution of Christians, opiate addiction, usury, and perversion—has soured for me. The contemporary game is miserable, exactly the boring exercise in stasis and lassitude that non-fans have forever accused it of being.

“The shift”; the disenfranchisement of the manager in favor of the ectomorphs of the back-office “data analytics team”; the inability to pull off the feat of keeping games under three hours (I can remember when games often took two and a half hours); the fetishistic fiddling with their gloves in which batters engage, stepping out of the box; the constant pitching changes, preceded as a rule by brain-numbing mound conferences—as against this litany of degradations, I can think of not one improvement of the game that the last 30 years has brought.

Even the spitting seems more disgusting to me these days, largely because there’s no longer any reason for it. Chewing tobacco used to explain it, and chewing tobacco added a note of down-home color to the game. But chewing tobacco has been banned for years.

The uniforms are worse, too. I consider the 1980s and 90s the golden era of the MLB uniform. Players’ get-ups were especially tight then, which made practical sense for athletes: there was less superfluous fabric to get in the way of the body in motion. Aesthetically speaking, the tight uniforms had the happy effect of lifting the buttocks, “framing” the hips, and outlining a well-turned thigh or calf.

In the last 15 or 20 years, though, the long evolution of the baseball uniform towards form-enhancing sleekness has been reversed. Now players look more and more baggy and sloppy, and an element of athletic beauty has fallen out of the game.

I can’t rule out that I’ll listen to baseball on the radio this year. The white noise of a Cleveland Indians or Cincinnati Reds broadcast fuzzing out of my pocket transistor set as I sit on our terrace on a summer’s evening, supervising Mother and Sister Marie as they labor in the fields, is pleasant. But it will be just that—white noise, background noise—and I won’t watch more than a few televised games. Who needs it? A boring home run derby; a watching-paint-dry matter of pitcher and catcher throwing the ball back and forth, punctuated now and then by a shot out of the park and the batter’s trot around the bases.

Baseball has become the perfect metaphor for the American neo-liberal order: decadence, repetition, and tedium, occasionally interrupted by some radically individualist exertion—a successful start-up launched, a gigantic fortune conjured out of cronyism and thin air, a schoolhouse or post-office or shopping mall shot up with automatic weapons.

In observance of Russian Orthodox Great Lent, let us pray to St. Ephraim!

​Oh, Lord and Master of life, take from me the spirit of sloth, despair, desire for power, ​and the urge for idle talk.

​Give us rather the spirit of chastity, humility, patience, and love for Your servant.

​Yea, O Lord and King, grant me to see my own sins and not to judge my brother in ​Christ.  For you are blessed and holy, unto ages of ages.