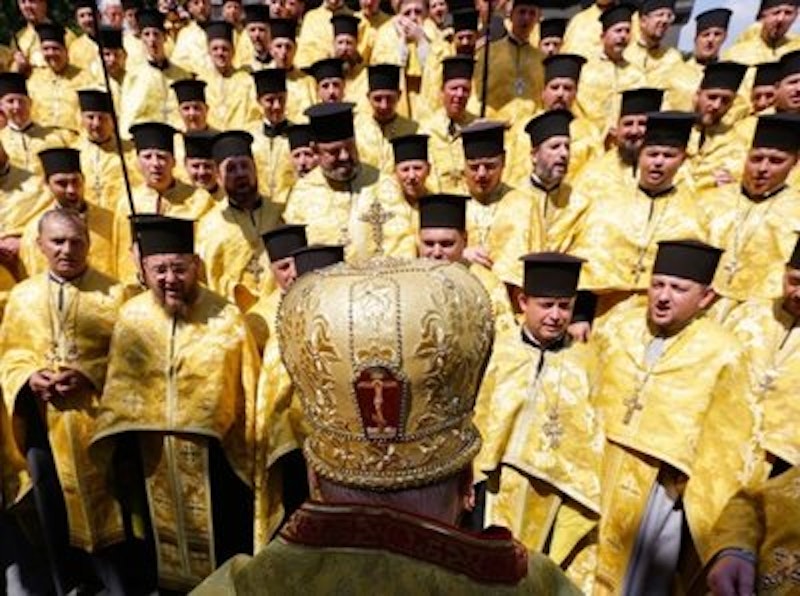 The grace of God manifests itself wondrously among men. Consider the news that Splice Today writer Alan Cabal will accept baptism into the Russian Orthodox Church (I assume the Moscow Patriarchate, the best and truest of the Church’s subdivisions).

I’m sure many of my Orthodox co-religionists will look askance at Cabal’s joining our Church. He’s not especially clubbable, to put it mildly. Russian Orthodoxy in America generally attracts the best of the best—great intellectuals like the profound theologian Professor Daniel Larison, for example, or (rumor has it) journalist Christopher Caldwell, that peerless expert on the politics and culture of the former Soviet space. It also attracts men and women of good old American Anglo-Saxon blood (Larison and Caldwell, needless to say, belong to this category, too) who’ve grown disillusioned with the insipid American Protestantism in which they were raised—and who are looking for meaning in the “strong tea” of 100 Percent Russianism.

Cabal’s keen pen aside, it’s not apparent that he’s among the best of the best. A self-described sodomite, drug-abuser, drifter, former Satanist, and all-around degenerate, he seems to approach the world in a spirit of alienation. I’m not even sure he’s unambiguously white, much less a pure Anglo-Saxon. His surname suggests he could well possess Spanish blood, while his given name leaves open the distinct possibility that he’s a Son of Israel, if a wonderfully disloyal one in light of his barbed observations about the Zionists.

Ah, but I can hear your objections already. “Harris, does not Our Savior Jesus Christ summon unto Himself expressly the sinner—the lowest of the low, the hated outcast, the wretched of the earth—and redeem that sinner in His blood? Are you unaware of our Russian Church’s ministry among the poor, the despised, the maligned, the mad? Surely you know, Harris, that, in its great mercy, the Russian Orthodox Church has historically accepted unto its bosom even such scum as the Tatar, the Georgian, and the Lett—representatives of all the peoples of the far-flung Russian Empire. Are you insensible, sir, of the miracle of His grace, of the subtle but infinite workings of His mercy?”

I’m not insensible, which is why I’m writing this piece—I mean to welcome Cabal to our community of faith. And yet (you’ll forgive me) I wonder if this haunted man, with all of his loudly advertised defects, will be capable of acting powerfully, as we converts must act, as a vector of the Russianist idea—as tools, even if ever so small tools, of the Russian state, spreading that state’s admirable values, advancing its noble conservative/traditionalist agenda.

No, I fear that Cabal’s flaws will make him but a weak vessel for Russianism, and a target for those who would slander the Russian Orthodox “paleocon” community as a cabal (if you will) of weird, hate-crazed, neo-Byzantine obscurantist perverts, scattered across the American heartland, masturbating to pictures of Ilyin and Arakcheyev and the Ukrainian Famine, moist and pale and over-eager, snuffling, bowlegged in our sandals. And that will be a problem, especially now as the Jews whip up a storm of anti-Russian agitation in the DIGITAL SHTETL of the media; as the Motherland is everywhere threatened along its borders; as the Queens pimp in Washington D.C joins the leaders of other fascist-liberal regimes in a series of expulsions of Russian citizens from Western capitals—expulsions that recall the “round-ups” and deportations to which the Nazis subjected untermenschen in their occupied territories.

Yes, the Church needs to accept the weak, the wretched, the sinful unto its heart. But it also needs soldiers who can defend it and the state of which it’s the spiritual analogue. To meet that latter need is the job of the Russian Orthodox convert, and I pray that Our Lord grants me strength to fulfill it when my hour comes. Is Cabal capable fulfilling it as well?