Rooster works on a new book and steals dip from a gas station. 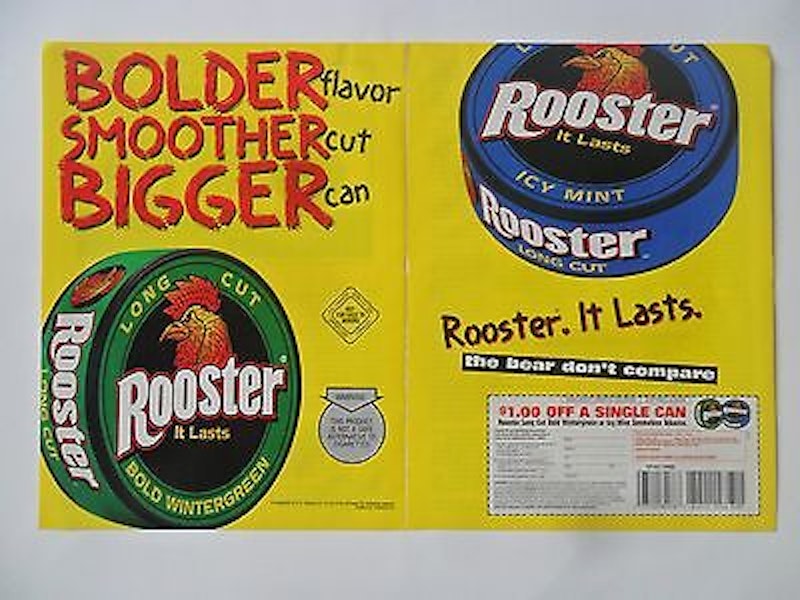 I think I drank too much wine last night. Feels like I’m developing a stomach ulcer, which is unusual because I never put anything in there that I don’t trust. Maybe it’s the cloves and the whole-wheat cigarettes—writing does this to you. I’m not sure if you’re aware of this but I’m an author, and a highly respected one at that. Jerzy Kosinski once called me “poet laureate of the chicken coop,” so I spur clawed him one night at a publishing party and we never spoke again. I don’t think I spoke to anyone at that party ever again, either. I was sort of a pariah after that. Luckily all I had to do was wait for them all to die so I could begin again and entertain a new generation of readers.

Adulation is nice; good for the ego. Isolation is better, but every six months or so I need to make regular stops in America’s three major cities to visit the intellectual luminaries that still associate with me and to try to wring more money from my publisher for another advance, another option. Always a Stone is being held up at the moment in Hollywood: sold for half a mil, languishing in development hell for the foreseeable future.

I don’t mind—Ross Douthat called it a “masterpiece,” yet one that “would never translate to the silver screen, no matter who directed it. It’s too demented, too strange, too idiosyncratic—Spielberg would have a better time with Gravity’s Rainbow.” So I paid Ross a visit as well and told him to “lay off” in as many words. I think he’s still bedridden, blind perhaps. That would explain the decline in his own writing.

Monica got me a perfect-bound organizer recently so that I could more easily keep up with my commitments and goals. I often get sidetracked and over-commit to obligations and events I know I can’t make but I say I can in aspiration. I should be applauded for it, really. But guile of my kind is not an easy sell.

I’ve been working on a new book lately, a semi-fictional autobiography that follows Monica, my cousin Bennington and me through the years and our contentious relationship with the humans we must share this earth with. It surprises me how well we’ve been able to integrate into civilized society, but maybe people are just getting dumber and less discerning.

I was at a gas station the other day (it’s the only place within 15 miles that sells my brand of dip), and the cashier wanted to see my ID, as if I had one. The government still doesn’t recognize us all people, which, you know, I could get all upset about, but what are you going to do? You savages still eat us.

I felt bad for him, hamstrung by bureaucracy, so rather than spur clawing him I just knocked him out with a bottle of Evian and grabbed the dip myself (okay, maybe an extra couple packs). I need nicotine to work, and though my wife doesn’t approve, I’ve promised her I’ll stop once my current project is picked up. Spring is here, flowers are blooming, and the loser birds are chirping at one in the morning. Things are going swell. I don’t feel nervous or upset at all. Don’t make me.