The 20th anniversary of ForgottenNY. 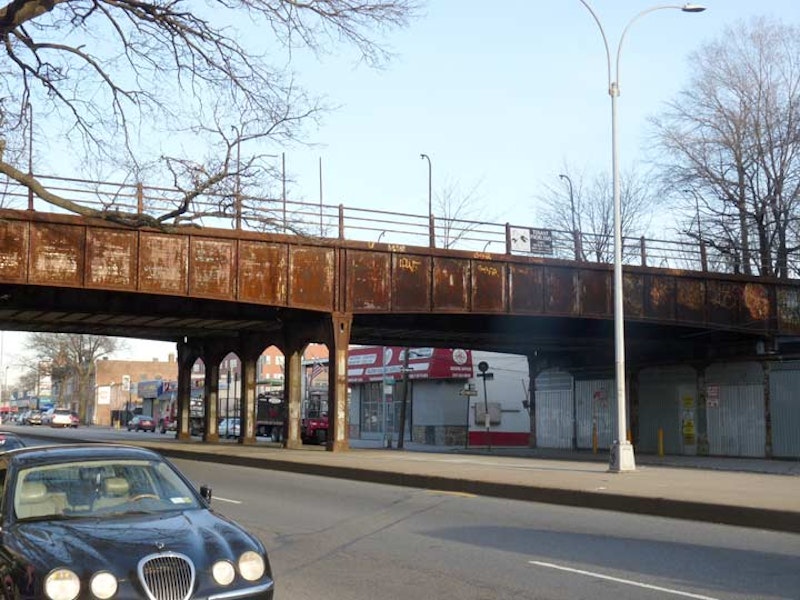 The Long Island Railroad’s Rockaway Beach Branch diverged from the LIRR’s Main Line in Rego Park at about 66th Ave. at what was called Whitepot Junction. It ran south through the neighborhoods of Middle Village, Woodhaven, Ozone Park, Howard Beach, across Jamaica Bay and through Broad Channel, and on to the Rockaway Peninsula, where one spur continued east and rejoined the LIRR in Far Rockaway, and the other went west and dead-ended at Beach 116th St. at the Rockaway Park station. 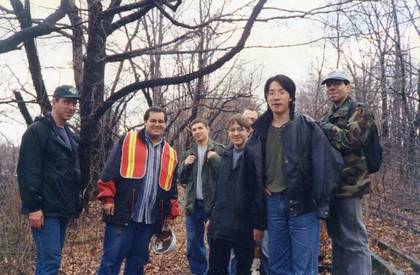 This month marks the 20th anniversary of my website, Forgotten New York, which examines NYC infrastructure like lampposts, advertising, signage, and neighborhoods usually not covered in familiar New York City guidebooks. I’ve revisited some classic scenes that I acquired on 35MM film from the early days between 1998 and 2002. One series was shot on the abandoned LIRR Rockaway branch. In the spring of 2000, a band of intrepid explorers led by rail fan Mark Wolodarsky (in orange MTA jacket) and the late New York City photographer Bernard Ente (at left) walked the Rockaway Branch from Rego Park to Woodhaven. I took the photo.

In the early days of the IND subway line, there was a plan to attach the LIRR Rockaway Beach Branch line to the IND subway. However, the Depression forced the IND to shelve that plan, but not before installing signage in some of its stations pointing to a Rockaway connection that was never built. So, the line remained with the LIRR until 1950. Frequent fires on the wooden trestle crossing Jamaica Bay impelled the LIRR to toss in the towel on the old line. It was purchased by New York City, which rebuilt the tracks and began subway service to the Rockaways in 1956. The northern end of the line above Liberty Ave. remained in service until 1962, when declining patronage convinced the LIRR to close it down.

The right of way of the old line has remained surprisingly intact over the years, and in some places, tracks and overpasses are still in place. This gave some transit visionaries the idea to reactivate it as a one-seat ride to JFK Airport, but since it now runs through a residential neighborhood, it’s unlikely that the locals will allow that to happen. 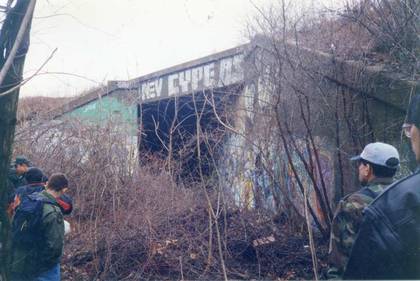 The branch of the LIRR we walked on was constructed in 1908-09 and connected the LIRR with the Rockaway Peninsula. It diverged from the main line at a point just east of the 63rd Dr. overpass known as the Whitepot Underjump. The branch point wasn’t called a “junction” because northbound trains passed into a short tunnel under the main line and then merged. All of the Rockaway Branch featured state of the art appointments, which meant no grade crossings, electrification and signals. Most of the branch was on an embankment or elevated over main streets.

The Rockaway Branch had stations at Grand St. (now Grand Ave.), Rego Park (which were on the Main Line but were stops only for Rockaway Branch trains), Parkside, Brooklyn Manor, Woodhaven [Junction], Ozone Park, Aqueduct, Howard Beach, Hamilton Beach, Goose Creek, The Raunt, Broad Channel, and other stations on the peninsula. Many were of wooden construction, and no trace of them remains today except a widening of the space between trackways. Two stations made of concrete, Woodhaven and Ozone Park, are still there. In 1956, Aqueduct, Howard Beach, Broad Channel and the peninsula stations were taken over by the TA as subway stations. 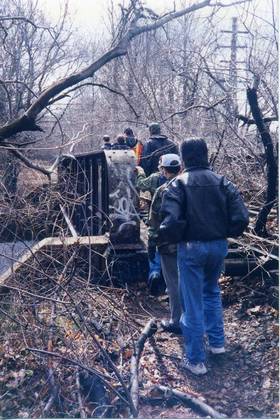 Explorers make their way over the Dartmouth St. Bridge. Several rusted bridges from The Rock still arch over Dartmouth, Fleet, Yellowstone Blvd., Metropolitan Ave., and other streets. On occasion the roadbed was washed out, leaving only the tracks in place. The Yellowstone Blvd. Bridge is a treacherous crossing because not only is it overgrown, there’s no clearance on either side, so a trip can send you into an 11-foot drop into traffic.

Today, the only portion of the old Rockaway branch legally open to the public is accessible from Trotting Course La. at Margaret Pl. at an entrance to Forest Park, just south of Union Turnpike and east of Woodhaven Blvd.; the railroad right of way runs through the park. There’s no official park path along these tracks, and walking them can be dangerous if you’re not steady on your feet—the terrain’s uneven, and it’s easy to trip over the rusted tracks. Dozens of signal towers that carried power for the tracks are still in place.

The Rockaway Branch passed over the Montauk LIRR branch on a wooden trestle that collapsed decades ago. The two lines connected via a flying junction at the Glendale Junction, which ceased operations in 1946. Till then, the Montauk Branch was electrified from Glendale to Fresh Pond, but the third rail was deactivated after that, which is why it’s safe to cross those tracks now, as long as a train isn’t coming.

The Montauk formerly had passenger service, which ended in March 1998 duet to low ridership, but also because the LIRR was introducing new cars with high entrance steps, and millions of dollars would’ve had to be spent building new platforms to allow access for what, on this branch, would have been two to five passengers at each station. 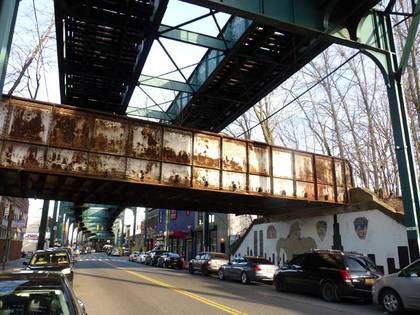 The Rockaway Branch (below) passes beneath the BMT J train tracks along Jamaica Ave. The line connects downtown Manhattan with Jamaica, running primarily along Broadway and Fulton St. in Brooklyn and Jamaica Ave. in Queens. There was never a connection between the two lines. 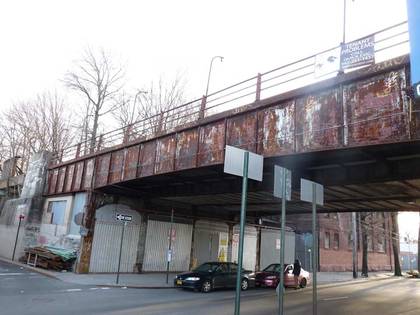 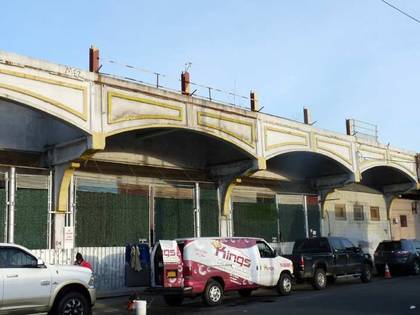 These are the remains of the old Ozone Park LIRR station just south of 101st Ave. at 100th St. This was once a very important transfer point on the LIRR. The present remains of the old Ozone Park station date to 1930, when the elevated concrete station replaced the grade-level tracks. Service ceased on June 8, 1962. Herbert George, whose book Change At Ozone Park describes the various LIRR lines that extended to the Rockaway Peninsula, describes the Ozone Park station:

“Ozone Park station was set up to enable passengers from Pennsylvania Station and Flatbush Avenue to reach the Rockaway Park area or Far Rockaway section simply by changing trains (“Change At Ozone Park!”) At certain times, the trains would stack end-to-end, and passengers would transfer back and forth on the platform. Of course, operation in the reverse direction also occurred. Due to street restrictions below, which limited the right-of-way width above, platforms were on the outside of the four track right-of-way, making an across-the-platform exchange impossible. To accommodate this, the platforms were made exceptionally long, so that non-rush hour length MU trains could stack end-to-end and allow passengers to transfer. A set of crossovers from the outside tracks to the inner tracks were at the east end of the station, to permit trains stopping at Ozone Park to run express after the station stop, or to perform the reverse move.”

South of Liberty Ave., another elevated train has a branch that curves south along the Rockaway Branch and there, the line has a third rail and the A train runs along it across Jamaica Bay.

Periodically, there are calls to reactivate the line as a subway branch that would connect the Rockaways and the current A train to the lines that run under Queens Boulevard, the E, F, R and M. There are also groups that want to convert the line to a linear park, similar to the High Line transformation in Chelsea. Both would require seizing of some private property and each plan would cost millions to build, and neither will ever happen.