HALT on the Hook

"Hungry, Angry, Lonely, Tired" addiction mantra misses how hard it is for many Americans today to make it. 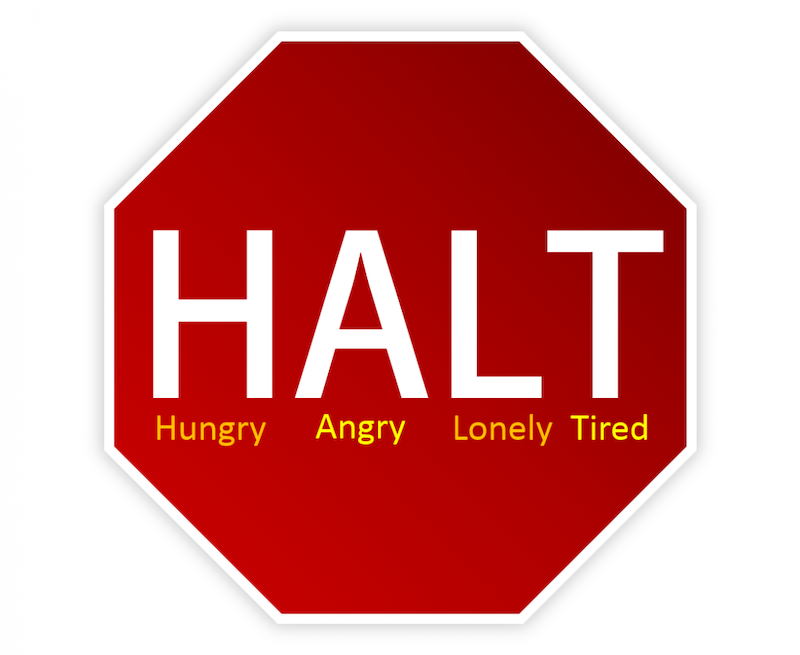 If you're a recovering addict, struggle with mental illness, or frequent the growing portions of the Internet dedicated to “wellness,” chances are you've already heard of HALT. It's a self-care tool that identifies four states—Hungry, Angry, Lonely, Tired—that make a person vulnerable to relapse and other self-destructive behaviors, a method that’s appealing for its simplicity. If you're an alcoholic craving a drink, just HALT and ask yourself, "Am I hungry, angry, lonely or tired?" If so, fix that and you might feel differently about giving into the craving.

For those in recovery tired of intangible solutions—from channeling “positive energy” to putting your faith in God—it can be a refreshingly practical approach, grounded not in an abstract philosophy but in recognizing the importance of meeting our basic human needs.

What it misses is how hard it is for many Americans today to meet those exact needs.

Let's start with “H.” Feeding America, the USA's biggest domestic hunger-relief organization, reports that in 2014 one in seven American families accessed their network of food banks, almost half of them black or Latino. Nearly 70 percent of American households report choosing between food and utilities; and 66 percent between food and healthcare. Most shockingly, 89 percent of US households with children are food insecure. When faced with between feeding yourself or your kids, concerns for your mental wellbeing might not feature high in most people's calculations.

The next most basic need: sleep. As shift-work, long commutes, and second jobs become more prevalent, so the nation's sleep has shortened. Americans today sleep on average 6.8 hours a night—down almost an hour since the 1940s—with 40 percent getting below the recommended seven hours. The poor and marginalized are affected the worst, with the lowest income earners, those without a college degree, and African-Americans more likely to be sleep-deprived.

While loneliness might be less quantifiable than hunger or tiredness, available evidence suggests it's no less inescapable for many. Articles lamenting the epidemic of American isolation abound, with a Cigna study finding that almost half of Americans report feelings of loneliness, and only half report having a meaningful social interaction daily. The study's recommendations? Don't be overworked, don't be unemployed, and—back to “T”—make sure you get enough sleep. Simple!

Most exponents of HALT do acknowledge that anger is probably the thorniest “letter” to tackle. However, their guidance on how to handle it almost always addresses anger at an individual in your life. For example, Healthypsych.com advises: “Anger is always about some form of perceived helplessness or powerlessness. Usually it can be remedied by identifying a request that needs to be made.”

The key word is perceived; what if you are powerless? What if the subject of your anger is a company or government far more powerful than you? What if the “request” you need to make is that ICE un-deport your uncle, the police un-brutalize your community, or an oil company un-build its pipeline through your sovereign territory? To quote James Baldwin, "To be a Negro in this country and to be relatively conscious is to be in a rage almost all the time. So that the first problem is how to control that rage so it won't destroy you.”

HALT doesn't really have the tools to deal with that.

As the government battles to contain the opioid epidemic and rates of other addictions and mental illnesses continue to rise, HALT's limitations have a lot to teach us; these crises can't be solved with any quick fix. It will take collective action to create a society where people's needs are met, a society without unavoidable and unrelenting hunger, anger, isolation or exhaustion for significant parts of the population. Until these unmet needs have been addressed, people will continue to turn to drugs for succour. Religion might do for some, but the opium of the people is mostly just opium.