Vernon Chatman Is Back with The Shivering Truth

Amid a newfound appreciation of Xavier, the show's creator is back with a new series on Adult Swim. 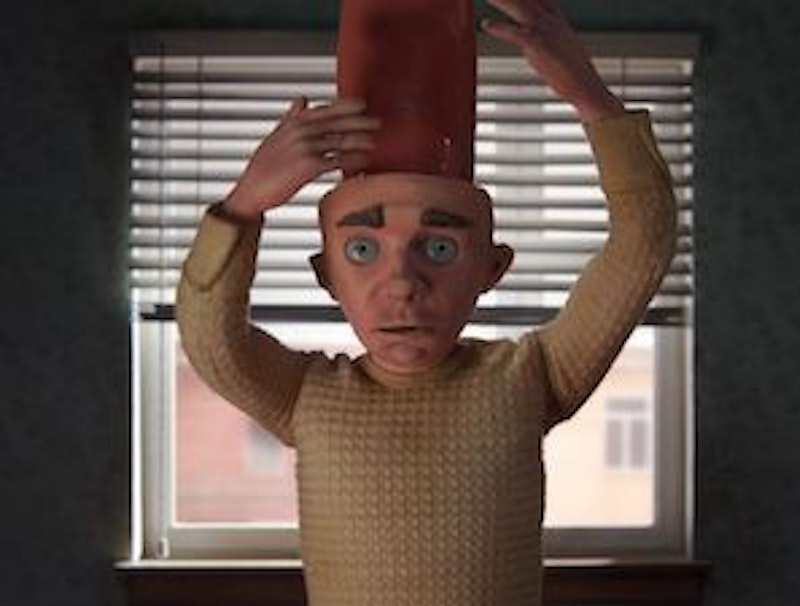 Xavier: Renegade Angel has been off the air for almost a decade, but the show has newfound hype from rebranding within the online collective consciousness—through 4chan memes, in YouTube explainer videos, etc.—as an antidote to Rick & Morty. It’s a relic of Adult Swim that gets all philosophical but, unlike Dan Harmon’s franchise, deliberately looks like garbage and lacks a thoughtful plot-structure. Because it’s cheap and gauche (and knows it is), people have been getting a kick out of irking R&M fanboys by saying you need an even higher IQ to understand Xavier.

Amid this newfound appreciation of Xavier, show creator Vernon Chatman is back with a new series on Adult Swim, called The Shivering Truth. The latter has inherited many of the key motifs of its precedent. There’s the rapid-paced structure, where one ostensible plot point starts, reaches a climax, and ends in less than a minute; and there are all the weapons-grade philosophical insights from various characters. It feels like Xavier is right there among them—except that’s just the familiar voice of Chatman, whose narration sounds somewhere between a grunt and a whisper, as if he’s about to open each episode intoning, In a world, where...(he doesn’t).

The major differences are that The Shivering Truth doesn’t have any recurring onscreen characters—each episode is its own 11-minute salvo of deranged, freewheeling fables that somehow link up—and it relies on a wholly different visual style. Whereas the crude 3D animation of Xavier was part of the gag, the brilliant claymation of the other show contributes to its lack thereof: It's hard to tell to what degree The Shivering Truth is even a comedy, rather than an endeavor in disturbing its audience.

The pilot begins as if it had already been going on without you—”And yet...” are Chatman’s first two words, which he uses to segue into a tale about a lunch-lady who makes deli meat from a blind girl’s massive welt on her back. That’s followed by a tale about suicide, which involves a guy working a suicide hotline telling the guy on the other end a tale about suicide. And surely this story-within-a-story anticipates a profound message: no one cares if you kill yourself, says the hotline guy. Ah, there we go.

The pilot also provides somewhat of a thesis for the rest of the episodes, in its concluding tale on the butterfly effect. Just as the flap of a butterfly’s wings can trigger a hurricane in Bali, a tale about a guy waking from a coma in the midst of nuclear holocaust can trigger a tale about a kid who keeps his senile grandma as a household pet (see episode three).

However, The Shivering Truth claims that the reason the butterfly effect exists is because those insects have a specific vendetta against Bali. The show totally misconstrues a commonly known phenomenon by replacing its profundity with absurdity, which speaks to how the show treats similarly Meaningful concepts in subsequent episodes—such as the nature of death and reincarnation, the search for true love, and the importance of poetry.

The series recalls the discomfiting mood of late-style Moral Orel—another claymated Adult Swim title—when it turned from a Davey and Goliath satire into a portrait of familial dysfunction within the domestic sphere. It’s also in line with the psychological dread of Charlie Kaufman’s Anomalisa, a film that features animation aid from Moral Orel’s Duke Johnson. The Shivering Truth follows a lineage of disturbing claymated works, but its other stylistic allusions are to more well known arts & culture: One sequence takes place within a labyrinthine workplace setting like you might’ve read in Kafka or seen in After Hours, another sequence is a direct lift of the Full Metal Jacket drill-line scene.

Undeniably its most prominent allusion is to that which came before. The scope of Chatman’s tropes and how he deals with each of them haven’t changed much since Xavier, but these histrionics are implemented within a different kind of creative framework. Without a main character The Shivering Truth is much more precarious, and through more carefully detailed animation, the visual grotesqueness veers graceful so that the indeterminacy—which one is it, grotesque or graceful?—intensifies just how unsettling the mood is overall. The Shivering Truth remains a critique of self-seriousness in the real world, as seen in the under-appreciated geniuses of the dorm room or dinner party who think they can make your mind explode with their heavy philosophical thoughts, man. This conceit has potential to seem tired, but it doesn’t end up feeling that way. Making this sort of critique is Chatman’s fate, his destiny; no, his fatestinatey.