Cleverness and Myth in the CoDex 1962 Trilogy

The working of vision into narrative puts a structure to experience. 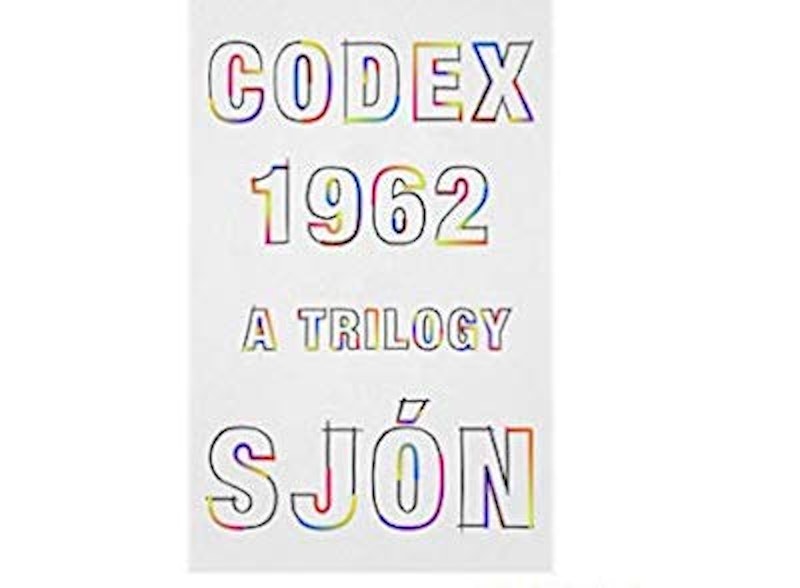 Under the name Sjón, Icelandic writer-musician Sigurjón Birgir Sigurðsson has had a varied career. Publishing a book of poems in 1978 at age 16, he’s since written more poetry, prize-wining novels, and (in collaboration) several stage plays. He’s also played with the Sugarcubes and Bjôrk; and with Bjôrk and Lars von Trier co-wrote, for von Trier’s film Dancer in the Dark, the Academy Award–nominated song “I’ve Seen It All.”

An English version of his CoDex 1962 trilogy recently came out in a single-volume English translation by Victoria Cribb. The first book, Thine Eyes Did See My Substance- A Love Story, was published in Iceland in 1994. 2001 saw the second book, Iceland’s Thousand Years- A Crime Story, and in 2016 came the third, I’m A Sleeping Door-A Science-Fiction Story.

As a whole it’s clever, and aware of its own cleverness. It’s also playful, and equally aware of its playfulness. Highly self-conscious, CoDex 1962 also bristles with references to fiction (Kafka, Lewis Carroll, the Icelandic Sagas) and myth and the act of storytelling. That sounds like an arid postmodern thought experiment. It isn’t, largely because it presents cleverness, playfulness, myth and storytelling as a response to trauma and to tragedy.

There’s a nominal plot that runs from book to book. Thine Eyes Did See My Substance describes the unusual circumstances surrounding the narrator’s conception in Germany during the Second World War. The narrator’s a kind of golem, an artificial man. Iceland’s Thousand Years follows the narrator’s father to Iceland, where eventually the narrator’s brought to full life years later in 1962. I’m A Sleeping Door finally gives us answers about who’s telling the story and why; it turns out that a biotech company exploring Icelandic DNA is central to the tale, writing out the genetic codex of the book’s title.

The novel’s presented as a story told by a man to a woman, but is also inset with smaller stories and anecdotes and fables. This is a book about tales, and the telling of tales, and why tales are told. Much of the last, it seems, has to do with pain—explaining pain, or explaining it away. Sjón’s witty and the style of the book is light, but the content’s often heavy, dealing with rape, genocide and the death of little children.

These things are linked to stories, the book suggests. They become transmogrified by story. A woman’s walk home after her rape becomes a weird nightmarish odyssey interrupted by tangents that touch on Fritz Lang’s M; her vision becomes not only a kind of painful core to the first volume, but a way of processing what has happened to her while moving her on to the next part of the story. The working of vision into narrative puts a structure to experience.

Where CoDex 1962 runs into problems is when the mass of story material overwhelms or threatens to overwhelm its sense of story structure. Sjón includes so many pieces of stories in the book, a fable about a berserker giant one moment and a short story about a Renaissance weaver-woman the next, that at first glance it can all feel random. It can also feel flat; pieces of story are introduced that don’t develop, and characters who don’t build.

The subtitles of the three volumes emphasize both the good and the bad. Love story, crime story, science-fiction story—in fact the three parts of the book are all of a piece, the tone the same, the language the same. There’s a love story in the first book, a crime in the second, and a science-fictional aspect to the third (in an epilogue, if nowhere else), but none of them are central to the development of the story. This isn’t a series of genre pieces, for better or worse. They don’t use those specific sets of conventions. But any story must find its own set of conventions to use, or else it’s simply chaotic material. That chaos sometimes threatens to overwhelm the book, making it less a story and more a series of things that happened.

Still, an excess of invention is usually a good problem to have. The repeated refrain of “story” in the subtitles emphasizes the ambition and the theme, the sheer storyness of the book. This book is about telling stories, and about telling stories that can’t be easily summed up by existing conventions.

To that extent, the self-conscious cleverness becomes a way of telling stories not just about stories but also about the meaning behind stories. The playfulness is a way of approaching what’s most horrible in life, a kind of armor that lets the narrator (or maybe the author) deal with terrible things, just as telling stories is a way of processing extreme mental states. The book is then about the way in which telling stories becomes how one comes to terms with trauma.

It’s also, by extension, about mythmaking. Our narrator, when we finally meet him, may or may not have been telling the truth about his origins; he may or may not be faithfully repeating what he was told. Certainly inset in his telling are werewolves, trolls, golems and angels. Myth is used here in a way wholly dissimilar to Neil Gaiman or Joseph Campbell, more ironic, more equivocal.

Ultimately this is a book much more in the vein of a Vladimir Nabokov, with a similar interest in stretching narrative structure and a similar self-aware voice. This is a clever book, but the cleverness doesn’t overwhelm the real power of the story.