How to Maintain Your Chastity and Marital Vows in Bangkok

A brief guide to the Thai sex industry. 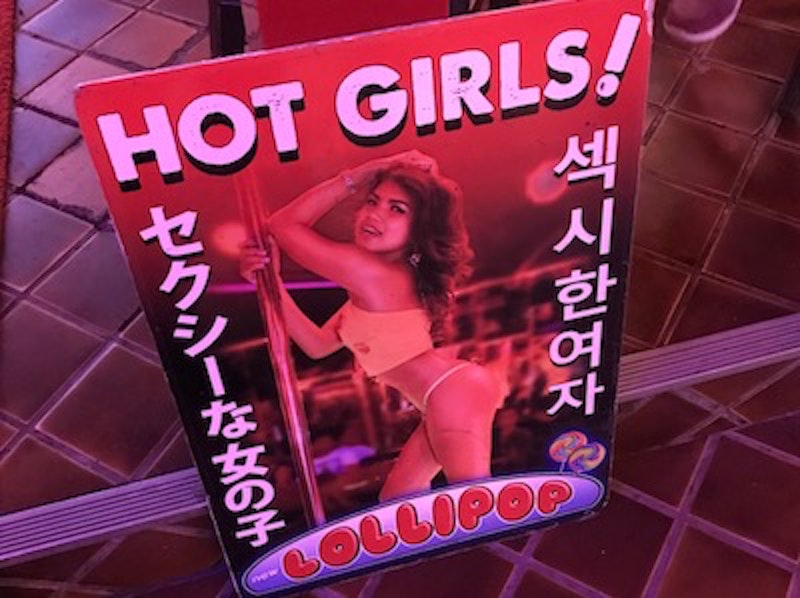 BANGKOK—I recently returned from several weeks in Southeast Asia, where I was reporting on how apparel factories producing for American brands ruthlessly exploit their workers. Naturally, I spent a good deal of time chatting with sex workers.

I say naturally because I enjoy writing about sex industries, as well as arms trafficking, drug cartels and pretty much all black and gray markets. But also because in Jakarta, Ho Chi Minh City and Bangkok—and especially the latter—it’s pretty easy to chat with sex workers if you go to bars. In fact, in Bangkok, it’s essentially de rigueur.

You’ve probably read about sex and Thailand, but I feel confident this story will provide important new information. I won’t be discussing ladyboys much, because that’s not my thing, but this short guidebook will cover everything else. There are all sorts of places you can go to in Bangkok, including karaoke bars, clubs where women sit on bleachers and the customer picks who he wants, pool halls and streets where you can find someone to provide blow jobs for the equivalent of about $5.

But I’m writing mostly about conventional bars in popular areas where Westerners, Asians and Arabs, for example, tend to have their own spots: the famous Soi Cowboy, a short street with a score of bars lit up like a Christmas tree; three-story Nana Plaza, and Patpong, also home to the wonderful Patpong Night Market, where I bought my son three genuine NBA jerseys at a very good price. (You can also get Viagra at a steep discount there, too, and pretty much anywhere in Bangkok. Pharmacies don’t require a prescription. The pharmacists must secretly laugh every time a customer says, “I’m buying this for a friend.”)

Undoubtedly most readers, at least men, are wondering one thing and one thing only by now: “If I happen to find myself in Bangkok traveling alone, how can I maintain my marital vows?” It’s going to be hard, but doable. Here are a few tips:

Sit outside. Don't go inside to the stage area and definitely don't go upstairs.

Okay, now you’re at the stage area, or probably upstairs. (The problem is that after drinking beer, you need to use the bathroom.)

Don't drink to excess. When the naked woman onstage urges you to have one more, just say no. If you don’t, she’ll soon be in your lap and you’ll be saying yes. And it can be very expensive just buying drinks—about $7 for a beer at most Soi Cowboy bars—for yourself and your companions.

There will be naked and/or barely dressed women standing next to you in the men’s room when you are using it, applying makeup or otherwise preparing for the stage, .

Even though the women are skilled conversationalists and make you feel special, you’re not a devastatingly attractive stud. You’re the same fat slob you are back home. That’s pretty much it.

Now for the small minority who want to discreetly get into trouble, I can help you out too. I’ll simultaneously educate you about the political economy of the sex industry in Thailand, focusing on Bangkok.

HISTORY: Like everywhere in the world, prostitution in Thailand has been around forever. It “has been common in modern Thailand and its predecessor states for centuries,” says Wikipedia. “During the Ayutthaya Kingdom (1351–1767), prostitution was legal and taxed, and the state ran brothels.”

But the modern industrial sex industry dates to the Vietnam War, specifically when the U.S. government prompted the Thai government to allow it to upgrade the U-Tapao Royal Thai Navy Airfield to support combat operations in Vietnam. As fate would have it, a sleepy seaside village called Pattaya was a 30-minute drive away. The GIs turned a local sex cottage industry into an international assembly line catering to Westerners.

LEGALITY AND RISKS: Technically, prostitution has been illegal in Thailand since 1960. It offends the country's conservative Buddhist majority and governments—including the nasty military regime currently in power—periodically threatening to crack down, but sex is too important to the Thai economy for that to happen. Sex generated an estimated $6.4 billion in revenue in 2015 and contributes anywhere from two to 10 percent of the GDP. (The Thai scholar Pasuk Phongpaichit, author of Guns, Girls, Gambling, Ganja, is one of the best writers on the topic.)

That means the odds of the police busting a tourist are extremely remote so you needn’t worry about that. What makes it even less likely is that the police and politicians are corrupt and are paid off to not bust anyone. That’s why most bars stay open until 3 a.m., even though the signs out front often say they close at 11 p.m. or 1 a.m. Unfortunately, the police will periodically harass, arrest and shake down sex workers.

The only thing that could lead to a future crackdown on prostitution in Thailand—at some point far down the road—is that the national economy has been diversifying so the sex industry’s importance has lessened over time. But don’t bet on it.

“The sex industry is entrenched,” one source, who preferred to remain anonymous, told me. “The government may want to get rid of it but the hard reality is it can’t. There’s too much money and too much influence on the part of people who run it and they don’t choose sides, the only question for them is where they have to send the envelopes.”

LOCATION: As mentioned above, the three main areas in Bangkok for Westerners are Patpong, Nana Plaza and Soi Cowboy, all of which are very accessible. The latter is a few blocks away from what is, as far as I can tell, the only ugly Buddhist shrine in Bangkok. Predictably, it’s at a Starbucks. It looks pretty from a distance, but when you get up close you’ll see the figures—zebras, elephants, giraffes and other animals—look like enlarged plastic figurines that you’d put on a birthday cake.

But sex is available everywhere in Bangkok, and around the clock. Step outside of your hotel—almost any hotel—and massage parlors are everywhere. You can get a legit massage, but whether it’s foot (about $10) or full body (less than $20) you’ll probably have to decline a happy ending. One morning at 10 a.m. I told a masseuse at a foot massage establishment that I only wanted my feet massaged. “Only?” she laughed.

COST: Prices for drinks and sex tend to be a little bit higher at Soi Cowboy than Nana Plaza or Patpong, but not by much. Generally you’ll be asked for about 3000 Thai baht—roughly $90—for a night with a companion, or 2000 for an hour. The women keep all or most of that. You’ll also have to pay a bar fine of about 500 baht and another 350 baht for a room, which are typically upstairs from the bar or down the street.

But you can always negotiate down. One young woman of about 20 standing outside of Nana Plaza thrust her cell phone at me. The message on the screen said she was deaf and offered herself up for 1500 bahts, worth about $45. I’ve no doubt I could have bargained had I wanted to.

IS IT OK? This is a complicated question. Putting aside all the arguments over whether sex work “empowers” women and your own conscience, it’s obviously wrong if the women are trafficked or coerced. I’m not sure how common that is in Bangkok, but it would appear to be infrequent—at least at the three main areas I visited—based on many conversations I had with sex workers, and from casual observation. Of course, even if most sex workers are not coerced, at least by physical force, they are coerced by Thailand’s cruel economy and terrible wages. Sex work pays better than most jobs young woman can get—most of them come from the interior—so I’m not sure if you’re an angel or a devil if you pay.

One sex worker at Suzie Wong, a popular establishment in Soi Cowboy, told me she gets paid 14,000 baht a month—that is a lot more than most, though; 6000 to 7000 seems to be more common—and she makes significantly more if she has sex with customers. (I’m not going to publish this woman’s stage name, but she was Number 07. All the woman have numbers, to make ordering easier. She told me she was like James Bond without the extra 0.)

I’d started the night stageside at Suzie Wong, where there wasn’t a lot of traffic, at least when I was there around 8 p.m. The dancers wore black panties, checked themselves out in the mirrors behind the customers, and talked and laughed with each other. One woman, obviously drunk, was successfully urging two young Asian men to buy drinks for her and her colleagues.

A female manager sitting on the stage kept looking my way, pointing to various dancers and making hand gestures to ask if I wanted one. One dancer sat next to her, pointed at me and smiled. Since I wasn’t in the market I decided to sit outside at a table, where there’s less pressure. That’s where I met 07.

She works six or seven days a week, from 5 p.m. until 3 a.m. and makes enough money to support her parents (they’re farmers in a village about four hours north of Bangkok, and think she works at a restaurant) and two siblings. At 34, she’s the oldest dancer at Suzie Wong. Most appear to be in their early 20s, and the youngest, she told me, is 20. Sex workers are not supposed to be younger than that but the use of fake IDs is common.

07 said the job was so-so and she moved a flattened palm to indicate that. The obvious downside is fucking guys for money, but she said she’s selective. I pointed to a fat tourist, in shorts and a t-shirt hanging over his belly, who was walking down the street in front of us. She said there was no way she’d have sex with him.

She said she planned to save money to retire in five years and buy a farm back in her village. I asked her if that was realistic and she said yes. We talked for about 30 minutes and I bought her two ginger ales. 07 left when a group of six Europeans arrived and sat at a neighboring table with several of her friends.

Another moral question for customers is that unlike 07, who was quite serious and a teetotaler, a lot of sex workers are on a slippery slope toward heavy drinking and drug abuse. At Twister, a bar on the third floor of Nana Plaza, I chatted with two dancers in their mid-20s. Neither spoke much English and it was hard to understand them anyway, but both liked tequila shots and I bought them a few, so I guess I contributed to the delinquency of young women. One of them—No. 169, a very pretty woman with dyed blonde hair, a black bikini and a lot of blue and red flower tattoos—was already drunk. They both forgot about me when I told them I wasn’t interested in going to a room with them, but I asked 169 for her phone number—I was curious if the dancers were allowed to—and she typed it into my cell phone.

So whether it’s okay to pay sex workers for sex is still an open question, and basically for you to decide. But if you want to, or don’t, this guide should be of use.