Architectural and historical gems in the South Bronx. 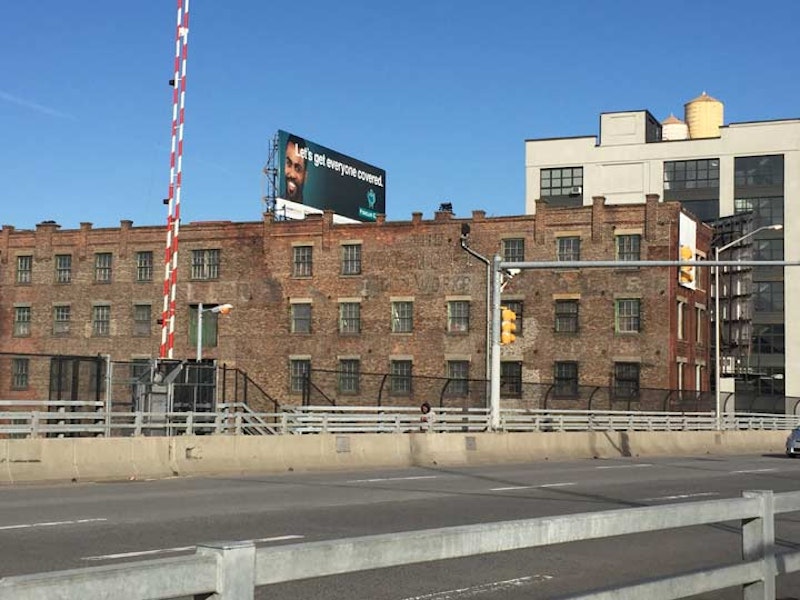 Squeezed in between the Harlem River and Yankee Stadium in the southernmost Bronx is a small neighborhood known as Mott Haven, after Jordan Mott, who built a tremendously successful iron works beginning in 1828 (the iron works continued to 1906), centered along the Harlem River from about 3rd Ave. to E. 138th St. His handiwork is still seen all over town on airshaft and manhole covers built by the Mott Iron Works. Mott bought the original property from Gouverneur Morris II in 1849; Morris was asked if he minded if the area was called Mott Haven, a name it had quickly acquired. "I don't care... while [Mott] is about it, he might as well change the Harlem River to the Jordan." The iron works produced practical and ornamental metalwork used worldwide.

In 1850, Mott drew up plans for the lower part of the Mott Haven Canal, which followed an underground stream parallel to Morris Ave. and east of the Harlem River. When completed, it enabled canal boats using the canal to go up as far as 138th St., encouraging the local industrial development. It has since been filled in. Residential neighborhoods, such as the one that forms the Mott Haven Historic District, are not common in Mott Haven. After 1856, Mott Haven joined with several other villages to form the town of Morrisania, although the area still continues to be known by its original name.

The remaining Mott Iron Works buildings are still standing west of 3rd Ave. between E. 134th St. and the Harlem River, and one is still marked with its old name. 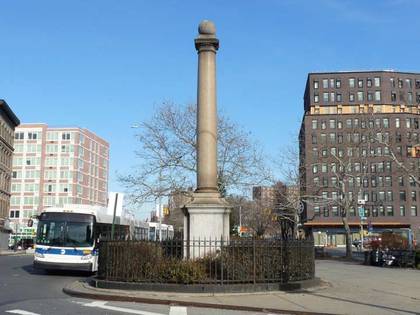 Graham Square, now called Graham Triangle, is one of the Bronx’ major crossroads as here E. 138th St., Lincoln Ave., Morris Ave. and 3rd Ave. all come together. The intersection’s marked by two war memorials; the one on the north side honors area World War I soldiers and was unveiled in 1921.

This memorial, on the south side of the square, is more interesting to me because it’s one of the few major Spanish-American War memorials in New York City.

Although it was a short war with a questionable mission, the sacrifice of American troops during the Spanish-American War is also commemorated by several memorials across the city. A column erected in 1919 at Graham Square in the Mott Haven section of the Bronx is dedicated to those from that community who served and died. In 1941, a large granite stele was dedicated to Spanish-American War veterans in Captain George H. Tilly Park in Jamaica, Queens. (Tilly, the son of a prominent Jamaica family, was killed while fighting in the Philippines in 1899.)

The most significant Spanish-American memorial in the city is the grand Maine Monument (1912) at Central Park's Merchant's Gate at Columbus Circle, that honors the 258 American sailors who perished when the battleship Maine exploded in the harbor of Havana, Cuba, then under Spanish rule. Soon after, newspaper publisher William Randolph Hearst agitated for war with Spain.

Staten Island's Hiker statue honors local soldiers who served in the war. The statue depicts a foot soldier dressed in military fatigues, with a rifle slung over his shoulder. The image (and nickname) is derived from the long marches that the infantry endured in the tropical Cuban climate and terrain. A Spanish-American War memorial flagpole is also in the center mall at Northern Blvd. and Main St. in Flushing. 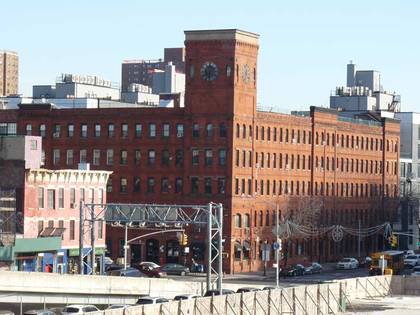 The Steinway piano factory across the East River in Astoria, Queens, may be better chronicled, but Mott Haven certainly had the greater number of piano manufacturers, enough that so that the South Bronx was known as “The Piano Capital of the United States” prior to World War I. The Krakauer Piano and Estey Piano works, at E. 132nd St. between Lincoln and Alexander Aves. and Kroeger Piano at Alexander Ave., whose buildings are still standing, catered to a burgeoning piano-playing clientele in the days before radio and TV. These factories also produced player pianos. Krakauer supplied over 1000 pianos to New York City’s public schools until its Bronx factory closed in the mid-1970s.

Estey, centered in Bluffton, Indiana since 1869, built a marvelous clock-tower building at Lincoln Ave. and Bruckner Blvd. (then E. 133rd St.) in 1888. That building, shown here, still survives today after being re-purposed for residences.

The original piano pioneer in the South Bronx was the Arion Piano-Forte Company, built by George Manner and sold to J. Simpson and Company who moved it to 3rd Ave. and E. 149th St. in 1872; which in turn sold to Estey in 1885. Other piano firms included Dunham and Sons, Denobrica, Stuyvesant, Dusinberre & Co., Haines Brothers, Newberry & Evans, and Jacob Doll & Co., who distributed Pianola piano rolls. 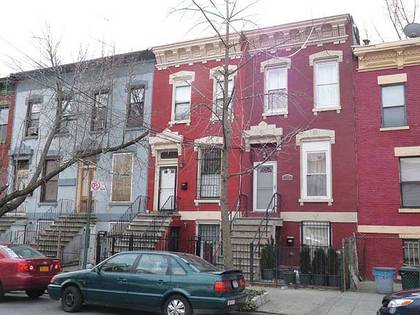 This is E. 142nd St. between Willis and Brook Aves. Mott Haven features several parallel blocks of attached brick buildings like this, in various states of upkeep. This block, though, is most famous for what was built on it long, long ago.

Patience and Fortitude, the two marble lions guarding the New York Public Library entrance at 5th Ave. and 42nd St., were sculpted in Mott Haven, on E. 142nd between Willis Ave. and Brook Ave., by the Piccirilli Brothers Monument Sculptors, whose family migrated here from Massa, Italy, in 1888. The firm also created the pediment of the New York Stock Exchange; the Maine Memorial in Central Park; Civic Virtue, the “scandalous” sculpture banished from City Hall Park to Kew Gardens, Queens in 1941 (and later, Green-Wood Cemetery) as well as Abe Lincoln at his Memorial in Washington.

It’s surprising that Mott Haven is not better known for the six Piccirilli Brothers, who were in business from 1893 to 1945. Attilio Piccirilli was the foremost artisan in the family (he executed the Daniel French portrait of Lincoln at the Memorial) and was on good terms with Enrico Caruso, Fiorello LaGuardia, and John D. Rockefeller. No less than three presidents, Teddy Roosevelt, William Howard Taft and Woodrow Wilson, paid a call to the Piccirilli Studios. 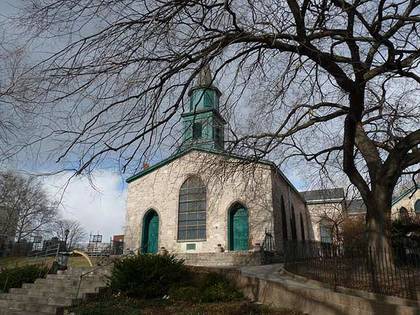 St. Ann’s Episcopal Church, St. Ann’s Ave. between E. 139th and E. 141st Sts., is the Bronx’s oldest surviving church, having been built in 1841 and dedicated to Gouverneur Morris’ mother, named, naturally, Ann. Several members of the Bronx’ most noted families of the colonial era and beyond are buried in the church’s graveyard, including Gouverneur and Lewis Morris.

Before much of Mott Haven was purchased by Jordan Mott for his iron works in the 1840s, Mott Haven was owned by the Morris family. Several generations of Morrises are interred in the churchyard, and one of the Bronx’s longest avenues, Morris Ave., was named for the prominent clan.

Gouverneur Morris (1752-1816) half-brother of Lewis Morris, was a political leader, diplomat, U.S. Senator, and American ambassador to France. He was an outspoken opponent to what he termed “unchecked popular democracy.” His son, G. Morris II, sold the estate to Jordan Mott.

Gouverneur Morris was outspoken and brash—nonetheless, he became ambassador due to his through knowledge of the French. In his youth, he’d drive teams of horses without the benefit of reins, yelling and cracking a whip instead, but one day one of his teams ran off and he was dragged, winding up with a crushed leg. For the rest of his life he hobbled along on a wooden leg, like a Dutch predecessor, Peter Stuyvesant. 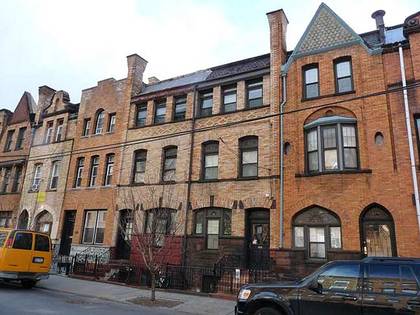 In 1891, developer Edward D. Bertine began construction on a row often houses on the south side of E. 136th St.

Designed by architect George Keister, this is one of the finest rows erected in New York City in the late-19th century. Keister designed several theatres in the Times Square area, including the Selwyn and the Belasco, as well as the Apollo uptown. Other houses in the Bertine rows were designed by architects John Hauser and Adolph Balschun Jr.

Mott Haven, and the South Bronx in general, have something of an unsavory reputation. Care must be taken, for sure, when walking around. But it has more architectural and historical gems that a lot of other New York neighborhoods that are considered safer.