I revel in our charmed life in this moment. 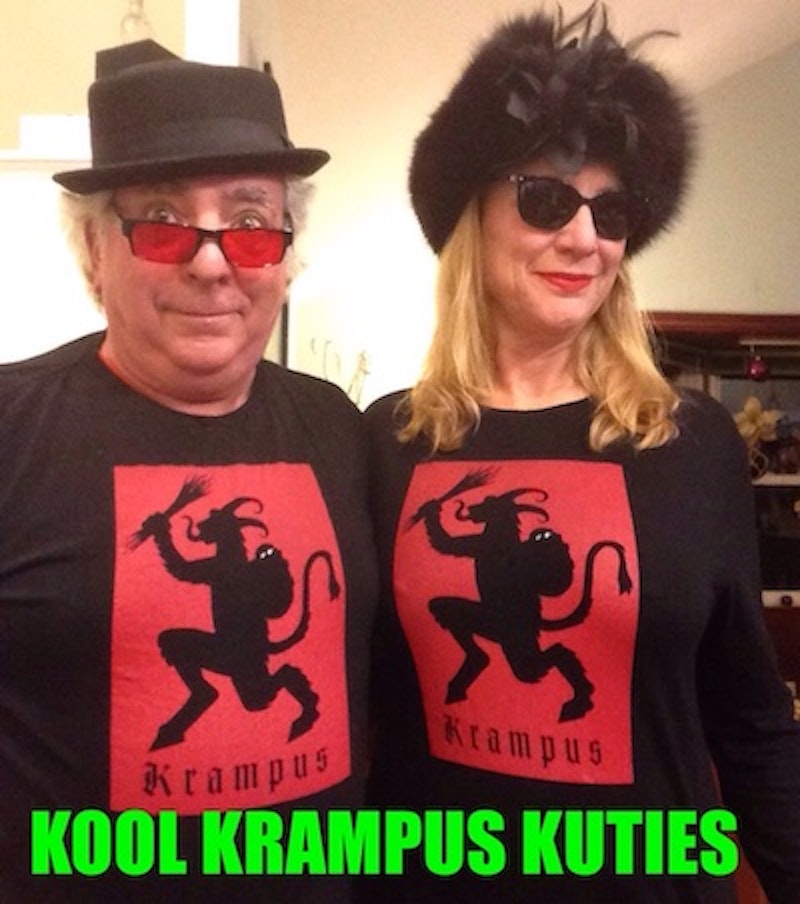 The Grinch Who Stole Christmas is a modern equivalent of Dickens’ Ebenezer Scrooge story. Adamant rejection for the holiday season and the yearly crass commercialism that accompanies it. Dr. Seuss created this cartoon character, who evolved into an unimaginably lucrative movie franchise and toy marketing vehicle, as a children's book in 1957. The Grinch is a green monstrous villain. His mean-hearted heart is two sizes too small resulting in a grumpy, grouchy Grinch, giving Santa Claus a run for the money in a twisted holiday popularity contest. A money-sucking machine that keeps taking more.

The Grinch is reminiscent of the European Krampus who plagues the alpine villages and towns every December in search of bad children to beat, whip and kidnap. This Christmas monster throws the naughty kids into his sack, and eventually eats them. There are many different kinds of Krampus but most of them resemble the devil/goat covered head to toe/hoof with lots of fur. One human foot and one cloven hoof. Like a hairy hermaphrodite with horns, the sidekick companion of jolly old Saint Nick. Although they pal around together, they’re total opposites.

Santa Claus evolved into the jolly figure recognized around the world and shamelessly exploited by Hallmark and the big chain stores as the giver of gifts. The Krampus is considered the epitome of an evil asshole. I've been a combination of all three: Scrooge, Grinch and the Krampus. I find the season unbearable and hypocritical. My intolerance is only exceeded by my extreme hatred for all things related to the sappy sentiments of Christmastime.

The worst offenders are Christmas songs played non-stop everywhere you go. “Silent Night,” “Little Drummer Boy,” “Rudolph the Red Nosed Reindeer,” “Frosty the Snowman”: I could go on but not without violent projectile vomiting. There's no reason for silly Christmas songs in my holiday repertoire. Just like some might reason there's no place for monsters in Christmas. It's not PC and extremely bad taste to inject dark demonic figures into the holiday spirit. People might be offended. Someone's sensitive feelings might get hurt.

I love the idea of the Krampus. I can celebrate and embrace its original classical concept. But even the Krampus is not immune to being used and abused to turn a profit. In 2015 the Krampus movie came out, exposing an unsuspecting public to scintillating holiday horrors. The family in the movie winds up trapped inside a glass snow globe to live out the rest of their lives celebrating Christmas over and over again. The evil Krampus watches them, bemused as it shakes the little globe to keep it snowing forever.

Last weekend we held a holiday open house in our new abode. Friends, family and neighbors came and went throughout the day wishing us well. Congratulations were in order for the makeover of our cozy home. My talented and beautiful wife did such a smashing job decorating our home with lights, decorations and an incredible array of food and sweets that I was truly in awe with pride. A punch bowl of wassail, a six-foot hoagie sub spread across the festive table and nearby colorful ornaments adorned a festooned handsome Scotch Pine tree. A blazing fire roared in the living room fireplace and all was right in our world. My heart grew two times bigger too.

My wife gave me the greatest gift anyone could ever receive. She's afforded me a few more happy years in relatively good health and well-being. If I'm lucky we'll be spending them together in peace and quiet with a love I've never truly known until now. A calmness and acceptance of all things. A wave of good tidings, comfort and joy. Like the silly Christmas carol, joyful and triumphant. A holiday miracle jubilee. I revel in our charmed life in this moment. Feeling like the cool cute monsters that we are. Even monsters need loving.