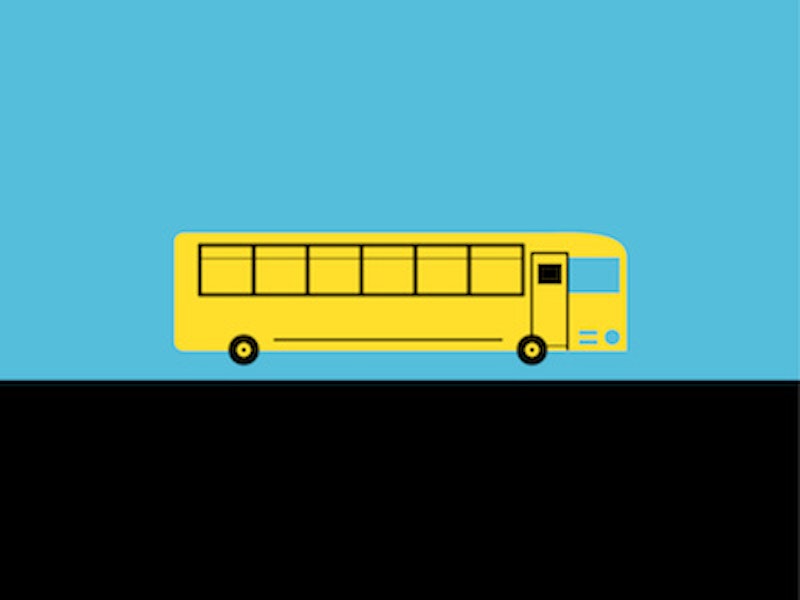 On the bus ride to and fro, Larry was the ocean washing away their sand castles.

In the morning, behind the wheel with a busload on the way to school, he was stone-faced and, discounting the occasional grunt or curse, silent, his brain a briar patch of wicked hangover that he hacked at, a thermos of black espresso his machete.

By afternoon, he was up and at 'em, sailing and loquacious, taking swigs from a pint of Canadian Club. On the first day, he told the boys, "If any of you fink on me for taking a nip, I'll track you down and cut your baws off. My cousin's in the FBI, so no prob-lay-moh to track you." To emphasize his point, he held high a switchblade for all to witness, flicked it open.

None of the teens in their navy blazers, white shirts, maroon ties, and gray slacks would've snitched on Larry. They were in quiet awe, saw him as worldly, and were honored to play studio audience to his Johnny Carson.

At age 28, a spot was thinning above Larry's ducktail. He sported bug-eye shades, rain or shine. No one had seen his eyes. His chin jutted like FDR's, and like FDR, he used a cigarette holder. His nose was small and pointed, like a turtle's. He was still in decent shape from a navy stint, but a small gut hung over his garrison belt.

Not only did Larry smoke, he paid no mind when the kids lit up. Every morning, Phil, a runty freshman, would hop on board, trot down the aisle to a seat muttering, “Cripes, I'm dyin’ for a smoke," and fire up his first Marlboro of the day. He ripped through three or four before the bus rolled into St. Simon’s. “My old man’s okay, I guess. But my old lady’s a nag, won’t lemme smoke in the house. Sheesh.”

Larry bolted an AM car radio under the yellow metal dashboard, strung a bare, tinny 4" speaker over his head, wired another in the back, providing a Top 40 soundtrack: “Green Tambourine,” “Itchycoo Park,” “(Sittin' on the) Dock of the Bay,” “Judy in Disguise,” “Summertime Blues,” “Love Is All Around,” etc. It was fun to hear the songs as the world rolled by: developments, fields, the river, filling stations, a farm set back from a pond, tarpaper shacks, woods. It eased the dread of algebra, gym, Father Owen, chem lab, Brother Cuthbert, pop quizzes, Mrs. Dimbleby, French.

Larry was a wellspring of opinions: These people are sucking up welfare and pumping out the bambinos to beat the band. Those people are cheap and pushy bastards. Them? All a bunch of lousy drunks, can’t handle their firewater. And them? The worst. They screw their own sisters. Hell, they’ll screw their own brothers.

Regarding screwing, Larry set the boys straight about Janis, the lady who sometimes subbed for him when he called in sick, too hungover to drive. “Trust me, like a rabbit. She'll do anything with pants. If you stumbled over her in an alley, she'd spread. A real pig.”

The boys were shocked. Scrawny Janis, pushing 40, clad in pale-green capris, walking in wedgies, had seemed okay. But if Larry said she was a nympho? Gospel. Thoughts of sick Janis, naked and wanton, begging for it in the midnight hour, inflamed adolescent imaginations, inspired filthy jokes. And whereas they used to josh around with Janis, now when she drove, they kept a frosty distance even when she’d try to break the ice.

On the afternoon ride, there was the quarter mile of Hart Ridge Rd. known as 45-45 because it went downhill at a 45-degree angle, and it ended with a 45-degree turn. The posted speed limit, 20 MPH, meant little to Larry. Every afternoon at the top of 45-45, he gave it the gun, gaining speed the entire way down as the yellow bus of boys bounced. Then, slamming on the brakes, he careened into the sharp turn, the bus leaning way to the left, on two wheels, tires screeching in agony, begging for mercy, clouds of blue smoke billowing, stinking of burnt rubber. Each boy hung onto the seat in front of him for dear life. Sometimes, for bonus kicks, Larry took his hands off the wheel, shook them over his head and shouted, "Look, Ma! No hands!" Or he'd cover his eyes and cry, "I can’t see! I can’t see!”

"I could not make that turn, at that speed, sober. I'm like a machine; I need to be oiled to function properly. Sober? Could not do that, I swear.”

Starting one early-April Monday morning, on Willow La., out in the middle of nowhere, there were two cars pulled off the road, nestled in the shadows under a sprawling pine. From the bus, the boys could look down and just make out that something torrid was going on: a hausfrau in heat with a young stud in a t-shirt. Every morning they were steaming the windows of his '62 candy-apple red Impala, her Plymouth station wagon parked next to it. They thought they'd found privacy. And so they had, for a few days.

Thursday afternoon Larry clicked off the radio and announced, "You know, tomorrow morning when we get to a certain spot, if I were to stop and open the doors, there'd be nothing to prevent anyone from having a little fun with some love bugs, know what I mean? Figure, she's married, don't want no one to know about their little affair. And he don't want hubby to beat the crap out of him. So, if we had a few chuckles, what could they do? Go to the cops? Not likely."

Friday morning was unseasonably warm, all the bus windows were open, rock ’n’ roll pouring out as it pulled alongside the vehicular love nest. Larry hit the brakes, flung open the doors. On cue, “Vallerie” blasted on the radio, belching fuzz bass, electric flamenco scales zipping around a fretboard, trumpets blaring high, as the yellow bus ejaculated its entire contents of pent-up teenage boys: jocks, brainiacs, greasers, clods, mods, they trampled out at top speed, tumbling into the spring air, swarming the Chevy, racing around it, whooping like warrior Injuns on Wagon Train, screaming banshees escaped from the inner circles. A junior kicked a spinner hubcap off, picked it up and sailed it into a pussy willow patch.

One teen threw himself on the hood, crawled forward, smeared his face on the windshield, mashing his nose, cheek and mouth into a distorted monster, leering through the glass darkly. Another kid picked up a big rock with both hands and scraped it along the trunk, ruining its immaculate finish, and then he smashed in taillights.

Runty Phil opened the driver's door with a butler’s bow. Three seniors dragged the Vitalised Don Juan out, tossed him to the ground, pummeled him, a frenzy of savage fists, St. Simon’s class rings cut into flesh.

Mel’s dungarees were stripped off before he was dragged into the woods. A buck-toothed freckled sophomore stepped up, delivered a solid thunk of a kick to the back of Mel’s head with a clunky wing-tip, and then penny loafers punished stomach, groin, face.

The woman, her blouse still unbuttoned to her navel, held her head with both hands and shrieked bloody murder. (Was their make-out session only a minute or so earlier?)

"...She sure looks different than the way she looked before!"

The mob sprinted back into the bus, howling victorious. Larry, smirking, slammed the doors shut, shoved it into gear, hit the gas, and they were off in a cloud of dust, next stop St. Simon’s. Behind them, Phil raced, waving his arms, coughing, “Hey! Wait for me!”