Public schools spend an inordinate sum of money on their students in certain parts of the country. 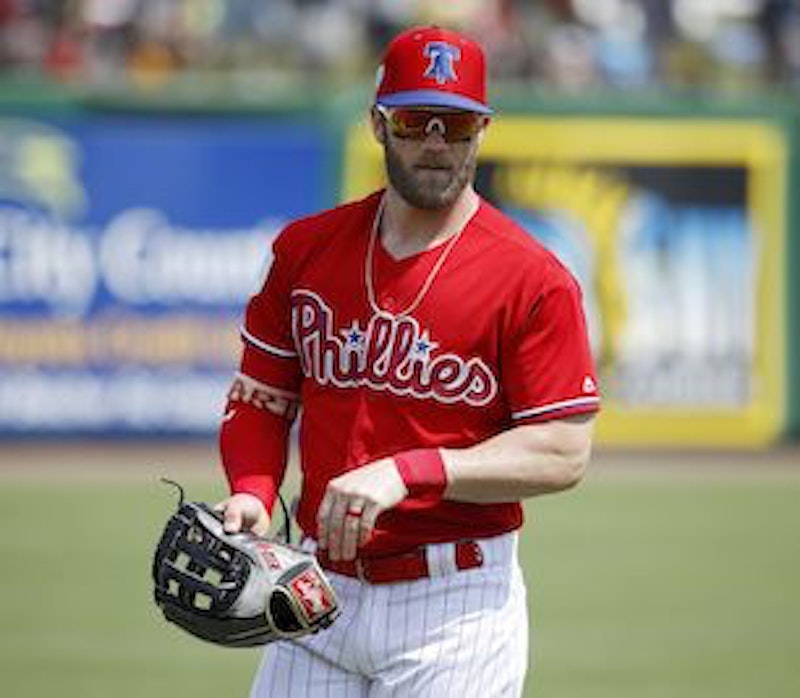 When 17-year-old phenom Bryce Harper went first overall in the 2010 MLB Draft, he didn’t set a trend. The highly-touted athlete did something unprecedented: he entered the MLB Draft one year early by attending college. In October 2009, Harper obtained his GED months after his high school sophomore year ended and then attended the College of Southern Nevada for the spring 2010 semester. It was a community college where he faced NJCAA competition—a higher level than his high school counterparts.

Almost a decade later, top MLB prospects haven’t followed suit. It's unlikely they ever will. As a byproduct of his decision, however, the now-Phillies outfielder unintentionally offered an interesting fix for the public education system.

Harper showed it’s possible to obtain a GED at 16-17 years old, go on to attend junior college and perform well enough in the classroom to play on a school sports team. Sports aside, the "Bryce Harper Model" should be a piece of the solution when it comes to fixing the modern American education system.

One can receive a GED at age 16 and is eligible to take the SATs/ACTs even earlier. By that time, many of the students are surely intelligent enough to pass classes at their local community college, so attending it free of charge on a voucher program should be an option for them.

Public schools spend an inordinate sum of money on their students in certain parts of the country, especially in urban areas. For example, according to the US Census Bureau, the cost per pupil in New York City ($25,199), Boston, ($22,292) and Baltimore, ($16,184) are astronomically high. The public high schools spend far more per student than the local community colleges, as is evident by the annual out-of-state tuition and fees charged by Brooklyn's Kingsborough Community College ($8,136), Baltimore City Community College ($7,394) or Boston's Roxbury Community College ($7,143). Even if the vouchers covered books and supplies for students, the cost would not crack $10,000 annually.

By attending these schools at a younger age, students would have the chance to bypass their junior/senior year of high school in struggling public school systems and work towards an associate's degree at no cost to themselves. Given the $1.5 trillion in student loan debt Americans currently possess, making the system more efficient could help aid this issue.

Theoretically, there could be 18-year-olds with two years of college completed with course credits in a subject they’re interested in as opposed to just finishing up high school—which features plenty of useless classes. Then, they could transfer those credits to a state school and graduate at as young as 20—or go part-time and work as well.Typically in the United States, taxpayers fund K-12 education. Since Americans have a right to a high school education, there’s nothing wrong with funding their less expensive education up until the time they would have graduated high school. After that, funding education for everyone is not a part of the American system. However, people on both the left and right can agree the cost of college today is insane and needs to be cut.

Although it makes more sense in urban communities where public transport is more available, it could work outside of it as well. Some students could drive to school. Others could get a ride from their parents, who are commuting to work. And perhaps vouchers could fund a bussing system like those of private and regional schools. In my home state of Massachusetts, the Catholic all-boys high school Xaverian Brothers is located in Westwood, but has a bus system which stops at centralized points in towns all throughout the area—like a Home Depot parking lot, a train station, or even a church.

High school-aged students could retain their high school athletic eligibility if bylaws to scholastic state athletic associations were amended. Students could take an eight a.m. class and a 10 a.m. class and play for their local public school teams. They let homeschooled kids, kids from private/charter schools which don't have teams play for their local town high school, so the same deal should be offered here.

College isn’t for everyone and in 2019 America, but more Americans than ever are attending despite most jobs in the country not requiring degrees and the enormously high dropout rates.Trades are valuable. There are many high-paying jobs in a number of different fields and those competing in the labor market with overworked/underpaid visa workers or losing their job to automation needn’t worry if they are a trained plumber or electrician.

And there are a lot of jobs that don’t require degrees. There are lawyers without law degrees, journalists without journalism degrees and CEOs who don't have degrees either. The current American education system needs massive changes, and the "Bryce Harper Model" is a start.