Summer on 86th St. in Bensonhurst

This wasn’t the day for a complete walk. 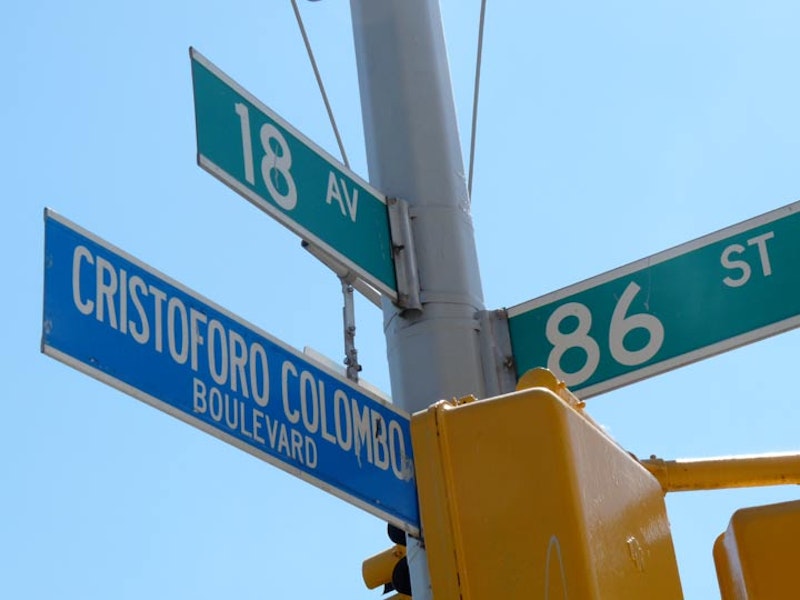 One day I’m going to walk 86th St. from the Narrows to Gravesend. It’s the main east-west street in southwest Brooklyn, and contains many old secrets. I grew up three blocks from 86th, when communities were tight-knit, and knew the retailers by name before they either retired or moved to the suburbs. The 86th St. BMT subway at 4th Ave. was my home subway, and I rode the B16 (Fort Hamilton Parkway), B63 (5th Ave.) B64 (86th St.) and B37 (3rd Ave.) buses with regularity. Now, the B1 and B64 have been recast in unfamiliar routes, and the B37 is no more.

This wasn’t the day for a complete walk. I’d just gotten back from a short mission to Bayswater, Queens, an outpost on the Far Rockaway peninsula, and will have to return again, as the ride was cut short due to scheduling necessities on the part of the friend who drove us there. After lunch at L&B Spumoni Gardens, he went to his home, and I walked 86th from about Ave. V to the 18th Ave. station on the D train, under the elevated.

18th Ave., which crosses 86th St. just south of the 18th Ave. station on the West End el line, was one of the first roads laid out through the old town of New Utrecht. It has been subtitled for Christopher Columbus since the 1980s. A network of old roads came together at 18th Ave. just north of 86th St., where the Brooklyn, Greenwood and Bath Plank Rd. (now New Utrecht Ave.), Kings Highway (now 84th St.) and the Road from New Utrecht to Flatbush (18th Ave.) intersected.

The town of New Utrecht was named for Utrecht, Netherlands, the fourth largest city in that country. In Dutch, “Utrecht” is derived from two words that mean “old fort,” so that “New Utrecht” actually means “New Old Fort.” It’s remembered in Brooklyn by New Utrecht Ave., the much shorter Old New Utrecht Rd. and by New Utrecht High School, which was shown in the opening credits for the 1970s Welcome Back Kotter TV show and where I took my math SATs.

New Utrecht Ave. is dominated by the elevated West End BMT (beginning in 2008, the D and M trains) but started in 1852 as a private plank road called the Brooklyn, Greenwood and Bath Plank Rd., so called because it ran from the Green-Wood Cemetery area to Bath Beach. By 1865, Charles Gunther’s Brooklyn, Bath and Coney Island Railroad was built along its length, and after Brooklyn Rapid Transit (the BRT) took it over, the route was placed on elevated tracks in 1917. 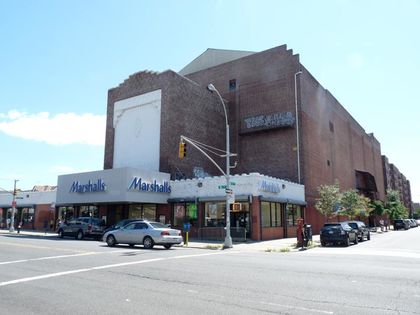 The Marshalls clothing store is located on the bottom floor of the old Loews Oriental Theatre at 86th St. and Bay 19th. The theater opened on October 13, 1927, with Beau Geste, starring Ronald Colman. Like many of the Loews theaters, the Oriental was known for its elaborate, perhaps garish, décor. The theater lasted a number of decades, adding a screen in 1977, and another, becoming a triplex, in 1984, soldiering on until 1995. 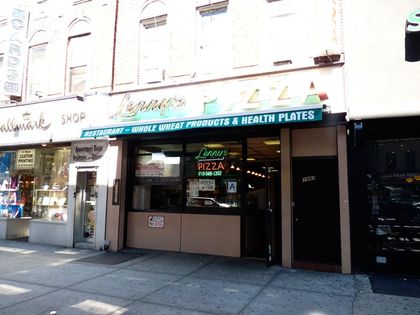 Lenny’s Pizza, at 1969 86th, is indelibly imprinted as the pizzeria in the opening scene of Saturday Night Fever. To save time, John Travolta’s character, Tony Manero, stacked two slices atop the other as he made his way to his hardware store job.

In the 1970s, I was amazed at how quickly the disco craze arose, and has never really left. It was just a couple of years earlier everyone wore rags and smoked weed, vowing never to become The Man. All of a sudden, everyone wanted to be The Man. People are instinctually acquisitive, and disco was emblematic of this characteristic. Travolta made his way back to Lenny’s in July 2018 to mark the 40th anniversary of Saturday Night Fever. 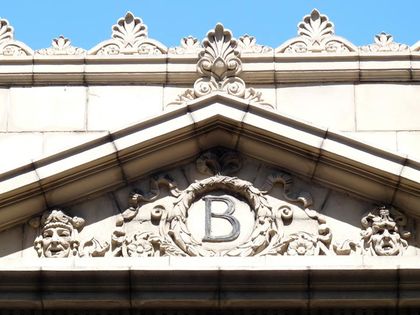 Here’s a second former theater, recognizable as such by the comedy and tragedy terra cotta masks on the pediments, just south of 20th Ave. Opened as the Benson Theatre in 1921, it was a 1400-seat venue, located in the shadows of the elevated subway in Bensonhurst. It was run as a dollar theater by the Golden Theatre chain before it was twinned by splitting it down the middle and renamed Benson Twins. Subsequently, it became a first run house. It was closed in the early-1990s for its current retail use. 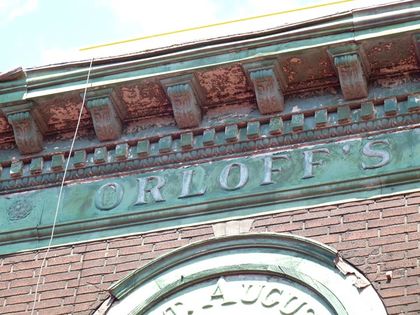 This ancient sign for Orloff’s, established, as it says, in August 1902 at 2211 86th near Bay Parkway, is occasionally obscured by advertising signage. Orloff’s sold dry goods, gents’ furnishings, and shoes.

What was originally called 22nd Ave. has been named Bay Parkway for almost a century. The Bay Ridge-Bensonhurst area has a proliferation of streets called “Bay,” “Ridge” or “Bay Ridge”—there’s Ridge Blvd., Ridge Court, Ridgecrest Terrace, and Bay Ridge Ave., Bay Ridge Parkway, Bay Ridge Pl., Bay Cliff Terrace, the numbered “Bay” streets from seven to 54, and Bay Parkway, which early on replaced 22nd Ave. on maps. All are named for either the Narrows or the steep hill that rises in Brooklyn on its east side. 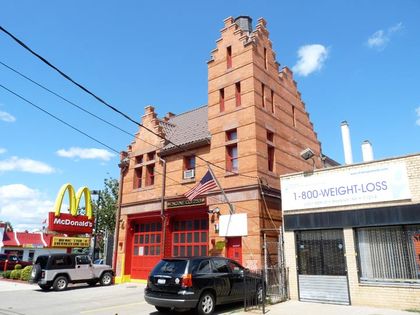 This beautiful firehouse, Engine 253, 86th St. near 24th Ave., displays the architectural feature called step gables. It’s a designated NYC Landmark and is one of four NYC firehouses designed by the Parfitt Brothers architectural firm, all around 1895-1896. Step gables gained their highest popularity in Holland in the 17th and 18th centuries. Other step-gabled buildings around town can be found at a bank on Flatbush and Flatlands Aves. a few miles east, and some commercial buildings on S. William St. in lower Manhattan.

—Kevin Walsh is webmaster of the award-winning website Forgotten NY, and the author of the books Forgotten New York (HarperCollins, 2006) and also, with the Greater Astoria Historical Society, Forgotten Queens (Arcadia, 2013)