Tumbling Through the Cracks of Reality

Resuscitate the dead on demand. 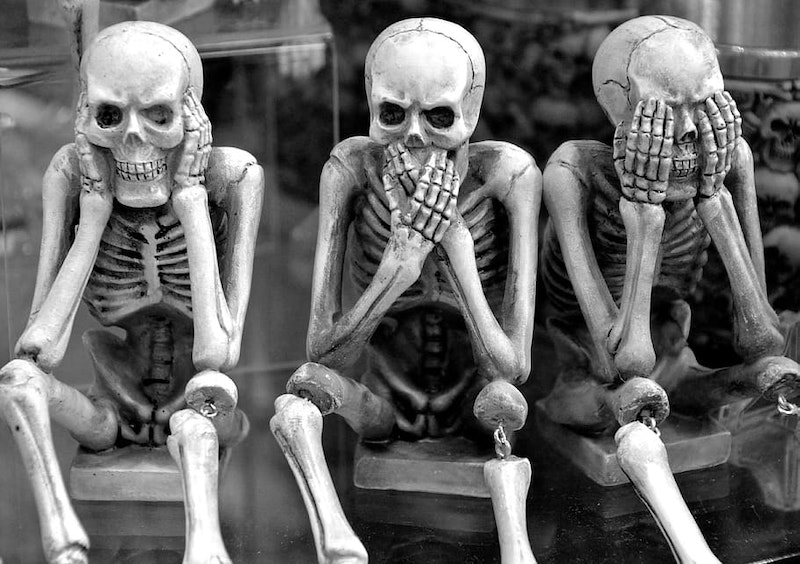 "Back it up buddy, give me six feet." A familiar request. Six feet over or six feet under is the new mantra. Not much of a choice there. Mask? Check. Gloves? Check. Hand Sanitizer? Almost gone. Now you're good to go. Billionaires are desperate. What difference does it make? Millions, billions, trillions, hemorrhaging money. Like a steady stream of explosive diarrhea. Losing their pants, every day another pile of currency disappears while the country slowly loses its mind. The economy tanked and sunk only to rise floating belly up. The greatness was never as good as they led on anyway. Now the field’s level. The virus doesn't care if you're rich or poor. No concerns about race, religion or sexual preference.

Not feeling sorry for poor lame Ruth Chris and those corporate steakhouses that smear the greasy landscape like every fast food burger joint bailing out the leaky deep fryer. Way too much carnivorous conspicuous consumption. They get big bailouts while mom and pop shops and little people go out of business forever. Bailouts for mega churches that pay no taxes. Forget about that “we the people” shtick. Like all fresh franchise roadkill of corporate excess bloated and rotting in the sun. There’s something fishy stinking up the place.

Tumbling through the cracks of reality near the gutter of a really gross national product. While the supply side gives more to those who deserve less. The rich lose nothing and deserve the very same nothing they give. Nothing at all like the rest of the supply side shits. Shutdown relief stimulus packages rescue the rich. They got theirs... fuck us... it’s so obvious except for the oblivious vaguely aware patriots who need to protest because they want a fucking haircut. Resuscitate the dead on demand. If you can still hear, have fairly good eyes and half a brain there’s no question what is what.

Meanwhile, everybody's lackadaisical about quarantine anyway. Like "no visitors" doesn't include them. An old "friend" recently texted me wanting to know if I’d let them stay with us in the country if the shit hits the fan. When and if riots, looting and murder go down. I texted back, "Sorry, Quarantine, no visitors.” They persisted, stating they could stay outside in a tent. Without hesitation I replied, "Fuck you! What part of quarantine, no visitors was unclear?" They replied it was a dog-eat-dog world and I’ll never talk to them or see them again. Good riddance. Like I owe them something because we were friends long ago and somehow managed to stay in touch over the years. Do you actually believe I want to look out my window and watch you living in my yard? What about hygiene? Where exactly do you plan on pissing, shitting and bathing or not bathing? Besides, it’s all the same madness except people out here in the country have a lot more guns.

Too many are cavalier about the pandemic. A lot of people are like so what, I'm healthy and it can't happen to me. Others I know have said, “Hey we want to stop over and visit you guys during the plague.” Like it can't happen here. I don't want or need any death-by-virus scenario. Not so long ago I made excuses for reasons not to attend this public thing or that social gathering. Nobody knows what the fuck is going on from day to day.

There's enough stuff that can kill you. If you believe you’re exempt from contracting a killer virus or weird flesh-eating disease, okay that's fine. It's your decision to do whatever you want in this present situation. Real or not, overblown paranoia, fear, anxiety, and disgust, it's all jake with me. Do whatever you must but don't get in my face screaming a litany of indignities about your rights. You have no rights any longer if you infringe upon mine. Leave me out of the group equation. This pandemic makes cancer look almost quaint and less threatening. The new cliché is “We're all in this thing together.” There's no one here for you, no one on your side. That's the hype. If you get this virus you’ll get it alone and you'll die the same way.

Take that crap elsewhere. Go stand in front of your state capital and hold that protest sign high and proud. It doesn't matter if you can't spell worth a damn. Who cares if nobody's wearing face masks? Reinvent the fictional beliefs we wish to believe. God isn’t dead if god never existed. You want to talk about god's will and leave your life in god's hands? Be my guest but keep your god to yourself. Quote the Bible in your own shelter.

Our heads are in the attic mumbling to a grumbling belly in the basement musing about notes from the bunker of our hearts playing music for lost souls. Musings from the mausoleum of broken hopes, wishes and thoughtless prayers gone unheard. Words never spoken out loud, everybody screaming a collective what the fuck. Right, the check’s in the mail and I promise not to come in your mouth. When the takers finally get everything they can grab and there’s nothing left then they'll come for you. Hiding in an America of the mind. The bullshit detector is broken and the charlatans are having a big laugh on our tab.