The Town That Was Swallowed By a Mountain

Remembering those lost in the 2005 La Conchita landslide. 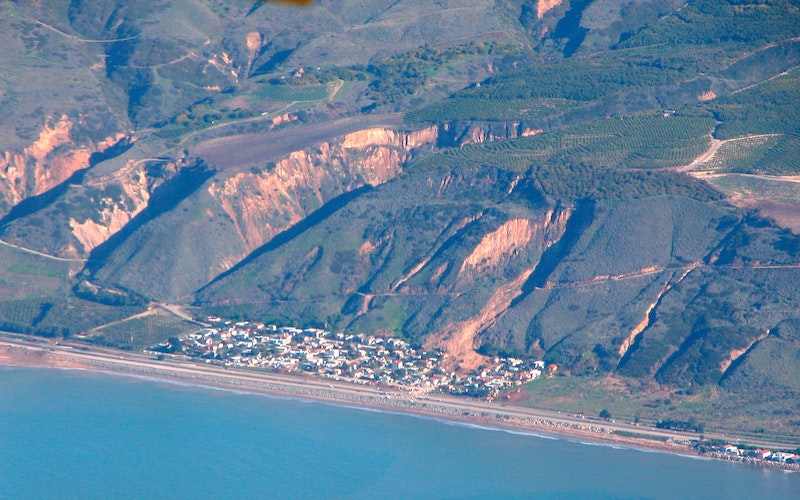 In January 2005, Southern California was hit by 15 straight days of rain. In the small town of La Conchita, just south of Santa Barbara, the 250 or so residents were nervous. The town is perched between the steep cliffs of Rincon Mountain and the Pacific Ocean. Ten years earlier, rains caused landslides that destroyed or damaged two dozen homes.  No one was hurt but locals understood it was only a matter of time before it happened again.

On Monday, January 10th, carpenter Jimmie Wallet walked to the only store in town to get ice cream for his kids. The sun was peeking through the clouds offering hope for better weather. But there were no seagulls, which typically meant more rain. As Jimmie arrived at the store, he saw it was closed. That’s when he noticed Highway 101, the only outlet to and from La Conchita, was also closed. The road was covered by four feet of mud and dozens of vehicles were trapped. Jimmie watched as the Ventura Fire Department extricated drivers from their cars. He lit a cigarette and conversed with his neighbors.

At 1:22 p.m., Jimmie heard a pop followed by a loud roar. He turned in time to see the mountain collapse behind him. A massive river of mud and rocks flowed toward town. Power lines toppled. Cars were tossed in the air. In just eight seconds, the houses at the base of the hill disappeared underneath the brown slush.

Jimmie sprinted toward the house where his family was staying. As he reached the site, the house was gone. In its place was a massive mound of dirt and rocks. He heard screams beneath the ground. He began digging with his hands. Firemen and paramedics joined him, but the ground quickly hardened like wet cement. They were helpless.

A search and rescue team arrived with bulldozers and excavators. Over the next few hours, dozens of survivors were dug up and pulled to safety. It wasn’t long before the first casualties were found. These included a man, 53, who loved to lead visitors on horseback through the local mountains; a female nurse, 28, who aspired to be a musician; and a surfer, 47, who’d lived in La Conchita his entire life.

Jimmie continued digging until his hands were raw. Friends brought shovels and helped him dig through the night. Search dogs were brought in. Thirty hours after the slide, rescuers found the bodies of Jimmie’s wife Michelle and their three daughters. All had died from blunt force trauma. Jimmie’s 16-year-old daughter remained safe in Ventura with her boyfriend.

The landslide killed 10 people in all. Thirteen houses were destroyed and 23 damaged. It was estimated that 400,000 tons of dirt fell atop the small town. The US Geological Survey has since concluded, “La Conchita will likely continue to experience a variety of landslide hazard… no part of the community can be considered safe… We anticipate renewed landslide activity during or after future periods of prolonged or intense rainfall.”

Today, 300 people still live in La Conchita. Rincon Hill remains unstable. Residents understand the risk. They park their cars facing downhill in case they have to make a quick exit. When it rains, clear water in the gutters is a good sign. Brown water is bad. Those who stay do so because of the beauty and the proximity to the ocean. It doesn’t hurt that houses that go for $3 million in neighboring Ventura are priced at $400,000 in La Conchita.

In 2015, on the 10th anniversary of the landslide, a bell was rung 10 times at 1:20 p.m. in tribute to the victims. Survivors consoled each other. A plaque with victims’ names was unveiled. Jimmie Wallet was not there. After the tragedy, he moved with other survivors to nearby Carpinteria, about five miles away. He spoke about moving to Hawaii but few know if he did. He was last seen by locals a few years back leaving flowers at the site and searching the ocean for dolphins like he once did with his daughters.