No one would bet on any horse opposing him. 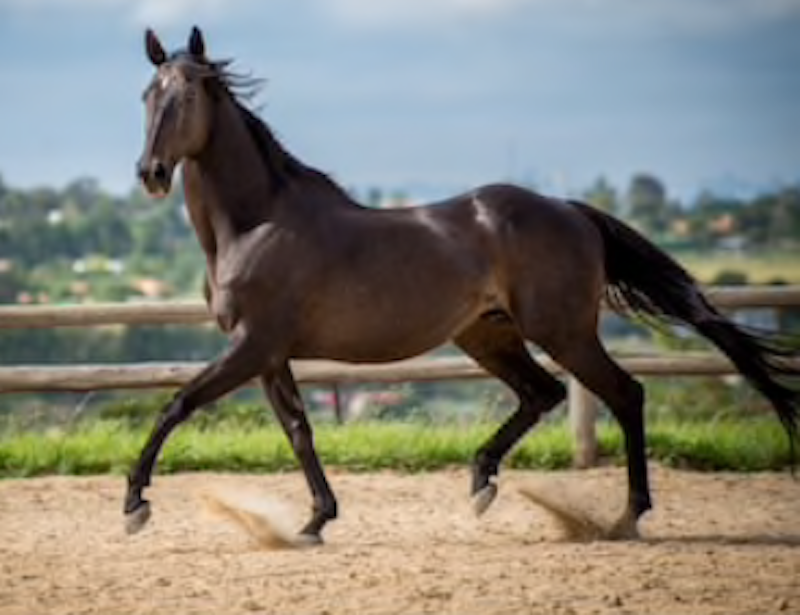 Three years ago, I began learning to ride horses. Before the railroads and the internal combustion engine, society depended on the horse for farming, transportation, ceremony, sport, pleasure, and warfare. Thereafter, some argue, only nostalgia kept the working horse alive.

But as its place in society changed, the horse came to be treated with growing admiration and appreciation. Hence the shock even outside the racing worlds when 31 horses died at Santa Anita during the 2018-2019 season: one senses that some racetrack owners, breeders, and trainers still consider horses mere capital equipment, to be exploited for maximal gains and discarded when no longer profitable. One thought that persons working with these intelligent, sensitive, and subtle animals would know viscerally that they’re indeed creatures of God, “the most noble and necessary creature of all four-footed Beasts,” to be treated with kindness and respect.

Julio, the Morgan-Percheron cross with whom I began my learning, was honorably retired in 2019 at the age of 30, equivalent to the early-80s in a human. So I work with Toby, a thoroughbred formally known as Noble Victory. He’s slender, fine-boned, and extraordinarily handsome. His movements are graceful, often with the beauty of ballet.

He’s also 26, which is roughly equivalent to a human in his early-70s. He’s developed back problems during the last year, including muscle tension and popping ribs. That precludes riding him for the moment. Instead, I work alongside him using a longe line. Although the spelling is French, the word is pronounced, “lunge.”

I’ve enjoyed this: the horseman requires self-discipline to maintain the correct spatial relationship to the horse. Often I fail and he stops. Yet when I’m fully focused on the horse, with clear intent and the learned skill to communicate it to him through the line, my gestures, and my spoken commands, Toby’s extremely cooperative.

He’s reserved. Perhaps thoroughbreds, aristocrats among horses, practice great self-restraint. He doesn’t often show emotion, although he clearly loves his owner Dorothy Crosby, my instructor. For my part, while I’m grooming him, he occasionally glances at me askance as if to say, “Peasant, you are privileged to brush me.” Perhaps that’s the difference between a four-legged animal whose ancestry can be traced over some 250 years and a two-legged animal who knows only who his great-grandparents were.

Most horses are stoic: in the wild, they conceal pain as much as possible for fear of vulnerability to predators or exclusion from the herd. Toby goes beyond that. Sometimes, even Dorothy can’t detect that he’s uncomfortable.

When I first groomed him in 2018, he began freaking out in the barn for reasons unknown. Perhaps horses, like most animals, see and hear things that humans have lost the sensitivity of vision and hearing to perceive. While properly secured, Toby was pounding the floor with his hooves. My instincts are compassionate but not necessarily sensible: I embraced the neck of a panic-stricken 1200-pound mass of muscle. As he waltzed me a bit, I murmured in his ear, "Calm down. Calm down." Oddly enough, he did.

Dorothy walked in to catch the end of the drama and said, calmly: "Are you out of your mind? Step away from an upset horse." I complied, replying that I would’ve been out of my mind had I a mind to be out of.

I was grooming him last month (he’s used to me now) when I realized I didn’t know what the term “thoroughbred” meant. The first thing I learned is that the British, who argue they originated the breed, always use an upper case T: Thoroughbred.

In the 18th century, wealthy British racing enthusiasts imported three magnificent Arab stallions: the Darley Arabian, the Godolphin Arabian, and the Byerley Turk. They were bred with 50 carefully selected mares to start a new line: Thoroughbred. The term is a literal translation of the Arabic kehilan, which refers to a horse that has been “pure-bred all through.”

In 1793, the Jockey Club opened the General Stud Book to record the pedigree of each Thoroughbred racehorse descended from the three Arabians and their mares. The idea was borrowed from the Arabs, whose horse breeders had pursued pure-line breeding for centuries, keeping scrupulous records of the ancestry of each of their champion horses.

Not long after it was opened, the Stud Book was closed. No new founding stock was permitted to enter it. The breed has thus been founded on a very narrow basis. It’s been estimated that 81 percent of the genetic makeup of today’s Thoroughbreds is based on only 31 original horses.

One can trace Toby’s ancestry for numerous generations through the website of the Jockey Club. So, after quite a bit of research, I found Toby descended from both the Darley Arabian and the Godolphin Arabian through Eclipse, one of the few great 18th century horses of whom I’d heard before I began riding.

Eclipse was a big horse for his time, about 16 hands (64 inches tall), a chestnut with a white stocking on his right hind leg. Bred in the stables of the Duke of Cumberland, he was sold in 1765 to William Wildman, a sheep dealer, for 75 guineas (roughly $17,500 in 2020 money). Eclipse didn’t race until he was five years old. The American racing world begins racing horses at the age of two, long before their physical maturity and often to their detriment. Wildman’s patience is evidence of wisdom and deep pockets.

The racing world teemed with rumors about this mystery Thoroughbred. Before entering his first race in 1769, he had a trial run at Epsom. The news of the trial leaked, but the bookies arrived only after it was over. They met an old woman who’d seen the event. She said “she had seen a horse with a white leg being chased by another, whom she did not think would catch the horse with the white leg, even if he pursued him to the end of the world.”

Eclipse had 18 starts, 18 wins, and won the King’s Plate 11 times. His finishes were described as “Eclipse first and the rest nowhere.” He was retired to stud after a career of only 17 months due to lack of competition: no one would bet on any horse opposing him.

But later about Toby’s ancestry.

In “Farewell the Neighing Steed,” an essay I published on October 10, 2019 in Splice Today, I described my feelings on Julio’s departure from my life after 2½ years of working with him. Some readers inquired whether he’d died. I assure you that Julio is alive and well.

I visited him during the afternoon of January 25, 2020. It was a misty day with tiny drops of rain in the air, but not heavy enough for complaint. I was warmly greeted by Rachel, his caregiver. As I approached Julio’s stall, I saw he remembered me. From his intense focus, he clearly remembered the pocket where I kept the carrots. Yes, they were there, along with an apple and a peppermint.

As I groomed him, he was constantly turning, nuzzling the pocket, pushing his muzzle into my head and torso, and stepping on my feet. Happily, I was wearing my helmet and winter riding boots. Rachel did something I'd not seen work with Julio before: she tossed the lead rope over his neck and he calmed down. So I currycombed him and gave him a carrot; hard-brushed, medium-brushed, and soft-brushed him, and gave him several carrots during each session; wire-brushed his tail, mane, and forelock; and cleaned his hooves. He was in excellent condition—Rachel knows how to care for her horses—and other than the morning’s accumulation of some ice and manure in his right fore hoof, he was perfectly clean. I think he enjoyed the grooming and seemed happy to see me, although I'm modest enough to think that pockets full of good things to eat might have entered into that too.

When I was finished, I talked with Rachel about him. Then I turned to the horse. I embraced him for the first time in our relationship, whispered in his ear that I loved him and thanked him for everything he’d helped me to learn, and then, also for the first time, kissed him. He seemed to grasp my feelings: he stood absolutely still. Then I thanked Rachel and her parents for their time and trouble and went home. Although I'd done relatively little physical work, I was drained, went upstairs to bed, and slept through till morning.

My aunt Sally's late husband, Ernest Duval, was a kind, gentle, and loving man, extremely literate and interested in the world without involving himself in its affairs beyond paying his taxes and voting. Ernie liked my writing, which was kind, and had Sally tell me an anecdote.

In one of my essays about riding, I discussed my difficulties in getting Julio to move when he wanted to stand still. I’d muttered to him one of Norma Desmond's lines from Sunset Boulevard:  "I’m ready for my close up, Mr. DeMille." Ernie’s uncle by marriage was Charles Brackett, the screenwriter of that and many more great films. Ernie's father died while he was a child, and while his mother had kept a roof over their heads, they had no money for college. Uncle Charles paid Ernie’s tuition for four years at St. Lawrence University. Class will out in a man’s acts as well as his art.

Parenthetically, the Morgan horse, a uniquely American breed from New Hampshire, descends from the Byerley Turk. The Turk was both a superb racer and a charger, a warhorse trained to remain calm amidst gunfire, explosions, and the screams of men and horses.

So the blood of a great horse, who through “his superior speed” saved the life of his owner, Captain Robert Byerley, during King William’s War, flows in Julio’s veins. Julio may not have inherited the speed. He certainly inherited the heart.