Carry the Briefings, Even if They're Misinformation 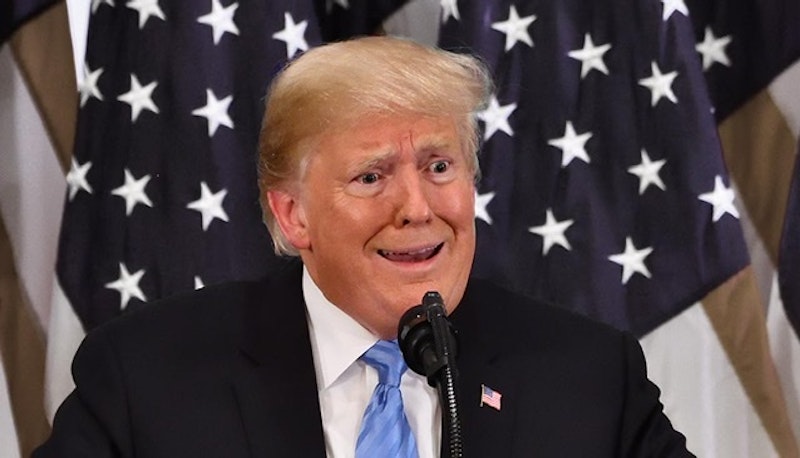 Many commentators have called on cable networks and other news operations to stop covering Trump’s daily briefings. Charles Blow writes, "Under no circumstance should these briefings be carried live. Doing so is a mistake bordering on journalistic malpractice." Rachel Maddow told her viewers, "I would stop putting those briefings on live TV—not out of spite, but because it’s misinformation." Meanwhile, Blow and Maddow, like everyone else, have covered the briefings heavily themselves, because they make (or made) news every day, including news that is or ought to be damaging to Trump.

Blow, Maddow and their ilk are very confused about the nature of journalism and the nature of misinformation; taking the hearings live is obviously a legitimate decision, and the only responsible one. (Like Maddow, I'm going to call it “mis” rather than “disinformation” because I hear the latter as suggesting a concerted campaign of systematic deception. Trump's random acts of epistemic irresponsibility are anything but systematic; they’re casual or randomly-generated idiocies.) Journalists, the argument goes, are or ought to be in the business of informing the public, not misleading it. Quite right, but reporting that someone said something false is not itself asserting something false. If he did indeed say it, it's reporting something true.

That such arguments are put forward seriously by people who call themselves journalists demonstrates how distorted by partisanship the process of reporting the news has become. I think the briefings should be carried and covered in full, even or especially if they are factually misleading. Also, that Maddow asserts that she's not speaking from spite doesn’t entail that she's not speaking from spite.

Let's draw some basic distinctions: what you might’ve learned in class, or which the professor might not have bothered with at all, because they seem too fundamental, ubiquitous, and obvious to need saying, or amount to the sort of foundational assumptions without which journalism isn’t possible at all. When Trump makes an assertion (say that hydroxychloroquine has shown amazing promise as a cure), and CNN shows him making that assertion, or The New York Times quotes him as making it, the reporters and outlets aren’t making the claim themselves.

Consider a case in which the Pope delivers a homily, and makes a number of claims about the nature of God, for example that God is love. If news operations report his words accurately, they aren’t by that mere fact endorsing the entire edifice of Catholic theology. Even if there is in fact no God, or if in fact God is something other than love (Lord knows what), they reported truly on the words of the Pope; that is, the report is factually accurate even if the theology is not. Or consider a case in which journalists cover the profession of innocence by someone who’s been criminally charged. In reporting that El Chapo or Paul Manafort maintains his innocence, say, they aren’t reporting that he’s in fact innocent. That you’re reporting on the earthquake doesn’t indicate that you approve of earthquakes.

These sorts of distinctions—between reporting on X and advocating X, between the facts about X and what people may be quoted as saying about X—are fundamental to the possibility of journalism.

On anyone's account, or on any reasonable account at any rate, Trump has made news in that briefing every day. Sometimes he's announced important changes of policy, as when he backed off the “re-open at Easter” approach and went to May 1. Sometimes he makes questionable or ridiculous claims as the doctors stand behind him trying not to wince. Sometime he insults a reporter. And whichever of these things may happen, CNN is liable to play it over and over for hours, and present a parade of Zoomheads declaring its falsity and dangerousness. Charles Blow will demonstrate the event to be newsworthy because he’ll issue a series of screeching yet mechanical insults at Trump on its basis. Maddow will devote her hour to it. Even as they show clearly that they themselves regard the event as the most important thing that happened yesterday, they’ll argue that it shouldn’t be carried live. In other words, they will make no sense at all.

Everyone—including the alleged journalists who are arguing that the events shouldn't be covered—knows them to be newsworthy. I suppose the argument is that they shouldn’t carry the briefings from 5:00 to 7:00, but should talk about them in an outraged tone for the other 22 hours of the day.

Some of the same people who think the briefings shouldn’t be covered were also outraged when the administration canceled the traditional daily briefing by the press secretary, though such events usually contain nothing new (unless Sean Spicer starts making claims about inaugural crowd sizes, let's say). They held that to be an emblem of the Trump administration's secretiveness and lack of accountability. Actually, Trump has always been more available to the press than most or any of his predecessors. But the idea that it's journalistically essential for the press secretary to serve up mush every day but unacceptable for the president himself to reveal his thinking (all too vividly) via a daily press conference is a measure of the distortion that real hatred or Maddow-level spite induces even among people who are supposedly committed to giving the public the truth.

The briefings also provide factual information from the people who are actually coordinating the response, such Doctors Fauci, Birx, and Redfield, though they didn't show up Friday and may find themselves unwilling to participate in the future if Trump keeps purveying Internet rumors as though they were scientific studies. But in the briefings, they and Trump and Pence are forced to respond to journalists' questions. What they say is newsworthy if true, and newsworthy if false.

The anti-briefing response is visceral rather than rational: the commentators want a president to comfort and inform them, and instead they get this. They hated Trump beyond measure before the pandemic started, and they can't stand to watch him on television every day now. However, "I never want to see that asshole's face again" is not the right basis for making editorial decisions.

That we, or at any rate the people making this argument, need a president who will inform and comfort us, doesn’t mean that what the actual president says—even or especially if it's false, misleading, or dangerous—isn’t news. Indeed, it makes it obvious that it is.