Why would someone throw trash into the ocean when we're here to keep trash out of it? 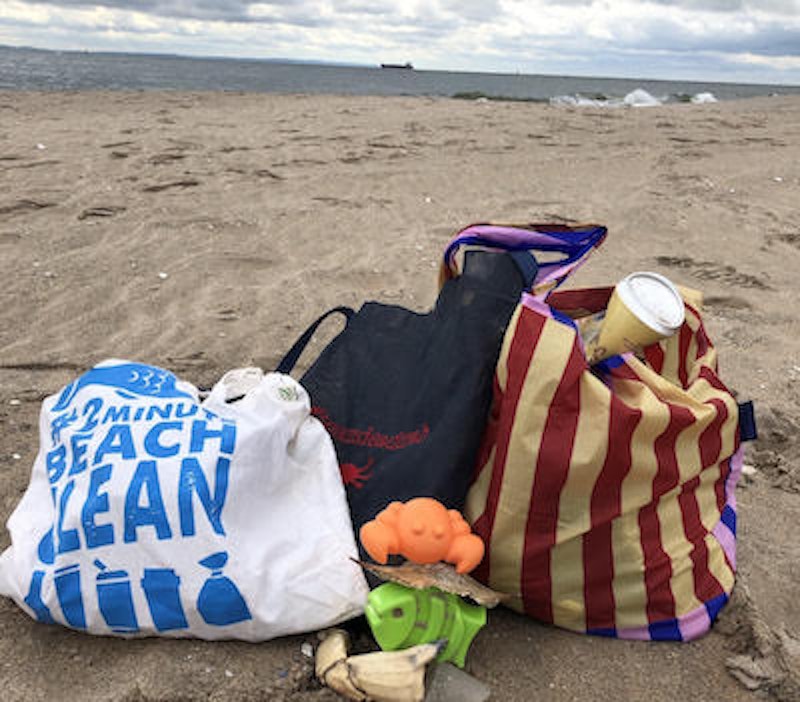 Last weekend I visited Coney Island. I’d seen a post on Instagram by a blogger I didn’t know, who’d planned a trash cleanup. I’m always willing to head up to one of my favorite landfill beaches to search for treasure, so I asked my friend Doreen if she wanted to volunteer with me for the beach cleanup and then we could head over and look for sea glass.

Amy Chen @Amyventures has done an amazing job not only coordinating the cleanup, but as a designer beautifully curating the trash into appealing images (and a YouTube video) that make it clear that beach cleanups are fun, not just functional. (Check out her blog post here.) That’s been my experience with Kent Island Beach Cleanups, where my daughter is an intern and where I do local cleanups also. We’re there to pick up trash but it’s also fun. At Coney Island, I “freed” a “beach marble” from a spray paint can (something I’ve done on the Chesapeake a bunch of times, once getting sprayed in the face by some pink spray paint and learning about pressurized cans #donttrythisathome) for a cool souvenir for one of the cleanup team members.

But the experience that struck me most was the juxtaposition of trash and treasure even before I headed to the beach where we searched for treasure and I was lucky enough to find probably one of my favorite beach glass finds thus far in my life, a pink perfume stopper.

As I picked up dozens and dozens of plastic bottle caps, straws and cigarette butts, the usual beach cleanup fare, I observed all the broken glass on the beach in various stages of wave-wear. On any other beach, in any other set of circumstances, if I was sea glass hunting and there for that purpose, I’d pick up glass for two reasons: to save it (for my own collection or for crafts), or to throw it back into the waves to become more worn, as “future sea glass.” On a beach where there’s too much broken glass, I wouldn’t even pick up the unfinished glass, leaving it for future tides to transform it into something worth keeping. On a beach where you’re doing a beach cleanup however (I have noticed this phenomenon back home on the Chesapeake as well, especially when trash is being counted, like during an International Coastal Cleanup), the broken glass is trash. It’s just trash, meant to be picked up and recycled. Not treasured or future-treasured.

As someone who’s a board member of one sea glass organization, co-executive director of another, is attending nine sea glass shows around the country this year and judging contests at half of them (where people win money and prizes for the best piece of this “broken trash glass”), I stood on the beach for a second and thought about how odd that seemed. On a daily basis you can go on Facebook groups (if you are so inclined; I’m not) and watch people argue about sea glass in 10 different ways: whether it’s been faked or is real, whether people should share glass beaches or keep them private, you name it, and often the arguing is because money becomes involved. A lot of times the love of the hunt and the peace that comes from the joy of beachcombing experience gets lost in the clutter of the online chatter.

So I stood there and at one point I’d picked up a bottle bottom, determined it needed “more time” and tossed it back into a wave. I noticed another person see me do that, and realized how odd that must have looked at a beach cleanup. Why would someone throw trash into the ocean when we are here to keep trash out of the ocean? Right. I had to readjust my thinking. On my beach, throwing back “not done” glass to become more wave-worn was just second nature. Here, the glass was all trash. That was mind-boggling. This glass, that people pay money for, fight over, that later that day I would cherish a piece of as a lifelong find, that I judge in contests, right now in this moment, that glass was trash, to be picked up and discarded/recycled.

I watched as a group of seagulls ahead of me made their way along the shoreline where the ocean (actually a NY bay) met the sand, eating small objects as quickly as they could. It’s always where I spend time at beach cleanups: those tiny microplastics, pieces of Styrofoam, cigarette butts, food wrappers, straw pieces and other small objects were always what I focused on picking up, so that the birds, and (after the tide came in) sea life didn’t ingest them. And the glass? Well that wouldn’t be very good for any sea creatures or waterfowl either. I never thought of sea glass hunting as trash removal from a beach before, but I’m happy to pitch in. There are people who purposefully throw broken glass into the ocean to find it later as sea glass (known as seeding), it happens everywhere. I don’t think littering the ocean for the purpose of finding sea glass Easter-egg style is okay. As beachcombers we’re in a great position to help keep our coastlines clean.