Beach treasure is a personal matter. 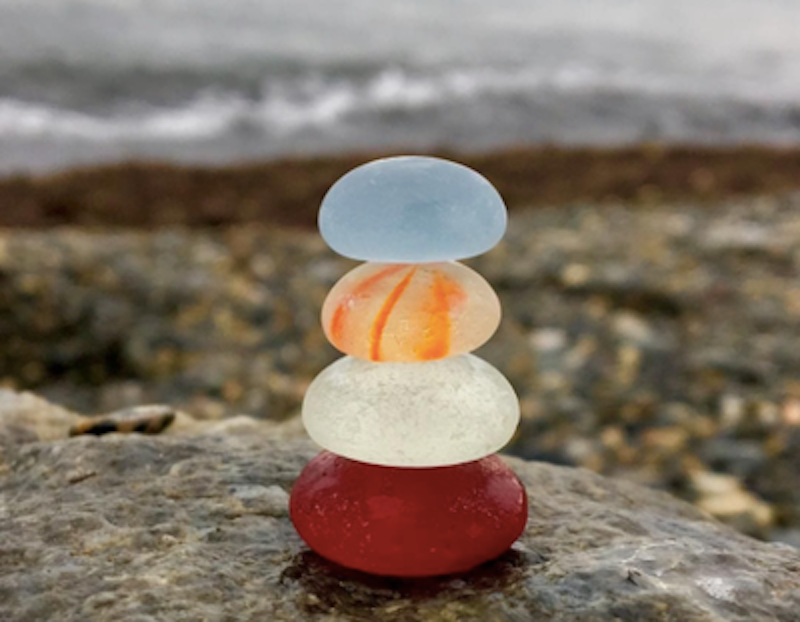 In traveling around the country last year visiting beaches, lecturing at sea glass conferences and seeing many Instagram photos, I noticed a rising trend in the discovery of seeded sea glass. Seeded sea glass is any glass that was purposefully thrown into the ocean to be discovered later by sea glass hunters. I’ve heard beachcombers argue that all sea glass is trash because it was all thrown into the ocean (or body of water) at some point or another, and this is true.

One of the best-known online resources for sea glass information is the Sea Glass Journal, published by Gary DeBlois, which defines sea glass as follows: “Sea glass, also called beach glass, is any glass that has eventually found its way to a body of water that has a sufficient combination of surf, sand and stone to naturally tumble smooth and frost the shard into a genuine sea glass gem.”

By this definition it could be argued (“any glass”) that a vase bead (sometimes known as craft, floral or aquarium beads, as shown in the above photo) is sea glass if it is well-finished by the ocean. Yet the North American Sea Glass Association (NASGA) is clear in its Genuine vs. Artificial article that “littering is discouraged.”

I asked Sea Glass Journal publisher Gary DeBlois about his thoughts on the matter. "I am not a fan of seeding," he said. "It is littering and has become pervasive because it's lucrative, corrupting the mystique and allure of sea glass."

Some of the most commonly “seeded” sea glass items are marbles and vase beads, which can now be found at many sea glass beaches around the country. At the International Sea Glass Museum in Fort Bragg California near Glass Beach, the owner Captain Cass Forrington not only sells glass to seed the beach with, but started local political action to seed Glass Beach (where many vase beads are now found) with tons of new broken glass three times a year as a “replenishment” policy to replace glass being taken by tourists, which is illegal but still takes place at the famous state park beach. The chunky glass is similar to what’s sold in craft stores and is sold cheaply by the bag labeled “for the next generation of sea glass hunters.”

In photos online, I’ve seen vase beads found at dozens of different locations coast to coast. There isn’t much information about the history of the manufacture of vase beads, but I remember seeing them as a kid, so perhaps it was sometime during or after the 1970s. They’re sold in every major retail outlet very inexpensively, making them a cheap, easy, colorful item for people to throw out into the waves in order to discover later. And if some of them have been tumbling around for 25 or more years, they have a decent finish on them, if not as much as a well-worn piece of sea glass from a century-old pharmaceutical bottle.

Gary has some thoughts on vase beads. "After many years of observation of sea glass listings on eBay I can definitely say they aren't the first glass used for seeding and aren't the most common type of glass product used in seeding," he points out. "Why people don't view marbles and stoppers with such skepticism and/or loathing is puzzling since these types of glass have been used in seeding for a long time."

"Let's face it, seeding wasn't a big concern until people realized that easy money could be gained from selling such glass," he adds. "The popularity of sea glass caught the attention of disingenuous non-collectors but it shouldn't come as a surprise. It's just the natural, albiet dishonest, progression of such things that are considered valuable."

I’ve seen debates on seeding take place in some of the Facebook sea glass groups that get heated. Some argue that if it comes out of the sea, it’s sea glass, period. They don’t care what the source is or how it got there. Especially when it comes to marbles. I’ve had people ask me if marbles are seeded and told them that it’s impossible to determine. How are you supposed to know in what way a marble got into the sea? You can make assumptions about high volumes of marbles showing up on the same beaches day after day, but you can never really be sure and even then, there are lots of reasons why many marbles show up on certain beaches. Are there beaches where people go to antique shops and buy huge jars of vintage marbles, or vintage stoppers, and toss them off cliffs into the ocean so they can find them later, Easter-egg-hunt style? Absolutely. But does it make a difference in someone's excitement when a wave-tumbled one is found? Definitely not.

"If someone other than the seeder finds the glass does it make it any less of a sea glass find?" asks Gary. "Are you going to tell someone that what he or she found isn't real sea glass because it was 'probably seeded'? Do we now define sea glass as unwanted trash, something lost at the beach or any other manner 'except for the specific purpose' of making sea glass? Does the act of throwing glass in the ocean with the hopes of it being found sometime in the future automatically disqualify it as being genuine?"

Just like there are people who go to Wal-Mart and buy pretty red and orange swirl vase beads or aquarium glass and stand somewhere and pitch those into the waves and then maybe even themselves come back in five years, bend over and smile when they pick them up with some “frost” on them as “sea glass.” But there are many who say no way, it’s littering the ocean plain and simple.

I’ve made an effort to come to less of a hard-lined conclusion. I’m not a sea glass policewoman. I'm a new board member of NASGA, an organization with sea glass education as a mission, and though I certainly do not speak for them, I have personal feelings on the matter. I’m not a fan of seeding. I don’t think modern vase beads should be sold as vintage sea glass unless the buyer is informed of what they are. But I’ve seen how happy people are when they find them. I may like a different type of sea glass, and you’ll never see me with a vase bead in my collection except to show as an example of seeded glass, but it doesn’t take away from the enrichment of someone else’s discoveries. As always, the joy of beachcombing is truly in the search, not the find.

Photo by @iheartseaglass, used with permission.