All of the mothers were awake, keeping a vigil of some sort. 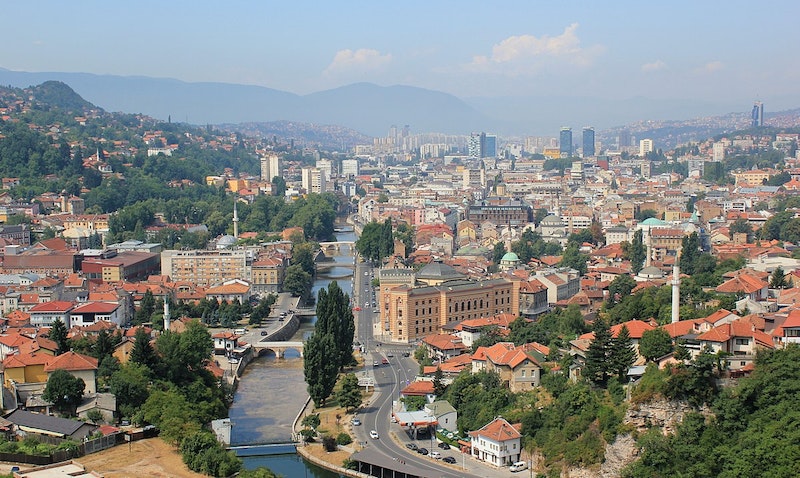 After a three-day journey from war-torn Sarajevo, I stepped off the diesel-smelling bus into the calm, breezy air of Split. I tried not to be disoriented by that sublime combination of the Adriatic Sea and pine trees. It has been almost a year since I smelled something other than poisonous mortar shells whose mist loomed over the city.

It wasn’t just me who experienced a sudden burst of pleasure. I was just one in a convoy of women and children reluctantly escaping the war. Some decided to stay in Croatia. Others, like myself, made their way onto the airplane bound for Prague.

The flight to Prague caused anxiety especially since for many (including myself) this would be our first time flying. The stewardesses brought us tea and ham and cheese sandwiches. I ate and drank ravenously completely disregarding the fact that as a Muslim, I’m not supposed to eat pork.

The airplane landed safely. Looking old and worn out, the women emerged holding their children closely. Each woman carried both visible and invisible suitcases. They knew that leaving Bosnia was saving their lives but that it also meant becoming a “displaced person.” What strange and sterile titles we invent to describe our complex metaphysical conditions!

At first, the sameness of the bodies looked like an unsettling image of the workers in Fritz Lang's Metropolis, but then it dissolved, as if this was a sure sign of the ensuing dispersement of the Bosnian refugees that would occur as the end of the war was nowhere in sight. Destroyers of life took what seemed to be a perfectly unified symphony and decided to deconstruct it and turn it into a grotesque sound.

The white marble floor of the airport supported the careful and polite steps of the refugees.  Somewhere in the midst of all the wounded souls, there was mine, walking slowly, hunching my back.

“Straighten your back! Stand tall! There's nothing to be ashamed of,” said my mother.

My mother said nothing. Silence was enough for me to know that I shouldn't disobey her in this situation and that I needed to gather enough power within me to straighten my back.

In what appeared to be a room reserved only for refugees, under the fluorescent light, there was a group of people who spoke a language other than Bosnian. They spoke Czech.

Next, please! A photographer was instructing the women and children to stay in the line and to move as quickly as possible. We were to become “documented refugees.” Women fiddled with their hair, trying to look a little better than war-torn zombies.

I was confused and anxious. The sounds of a foreign language echoed in the “documentation room,” and I was beginning to get an awful headache. The line was moving faster than I expected and I was getting closer to being stamped as a refugee. The memory of standing in line during terrifying gym classes made me choke and I couldn’t see the difference between a totalitarian gym teacher forcing me to climb the rope and a somewhat warm and welcoming photographer.

His words didn't make any impact on me. My body moved exclusive of my mind, and although I couldn’t understand one word of this new language, I did exactly what he told me: I came closer. I didn't blink or smile when the flash went off. Despite my shrugged shoulders and hunched back, I opened my dark eyes wide, in an effort to remember this moment forever, as if I wanted to carry it into the future as an adorable memento of my childhood.

The black and white, passport-sized photograph was proof of my newfound statelessness. Suddenly, I became overwhelmed with the feeling of wanting to know the photographer's name and personal history, but the bizarre and untimely obsession disappeared as I become distracted by the overlapping voices of women.

“I could have smiled.”

“I should have done something else with my hair.”

I looked dirty too. My hair was a collection of greasy strands. I grasped the strands as if to make them softer and fluffier (I was imitating beautiful woman in the 1980s shampoo commercial filmed in soft focus), but all I felt was oily filth. I moved my feet across the territory of the unknowable.

“Another bus?” said one woman.

She’d kept to herself for most of the journey and maybe had gotten to the point where her voice had to come out. The need for and necessity of courage was wholly alien to her. But it was there. Like finding a stale cracker in the pantry in the middle of the war. A cracker that brought hope, however temporary it might’ve been.

Yes, another bus, another journey into the long night headed for one of the refugee camps scattered across the Czech republic. One of the women joined others in a weak effort of complaints.

“Can we just sleep, rest? Finally.”

A moment of silent agreement between women ensued. The inaudible nods and gazes equaled solidarity. As the souls connected, the bodies moved onto the bus. I was in a region of metaphysical in-between-ness. I found the first available seat on the bus and plopped myself into it. All of the mothers were awake, keeping a vigil of some sort. I eased myself into a deep, sweet sleep.