Train Whistles Crying in the Night

Discussing life as a 21st-century hobo. 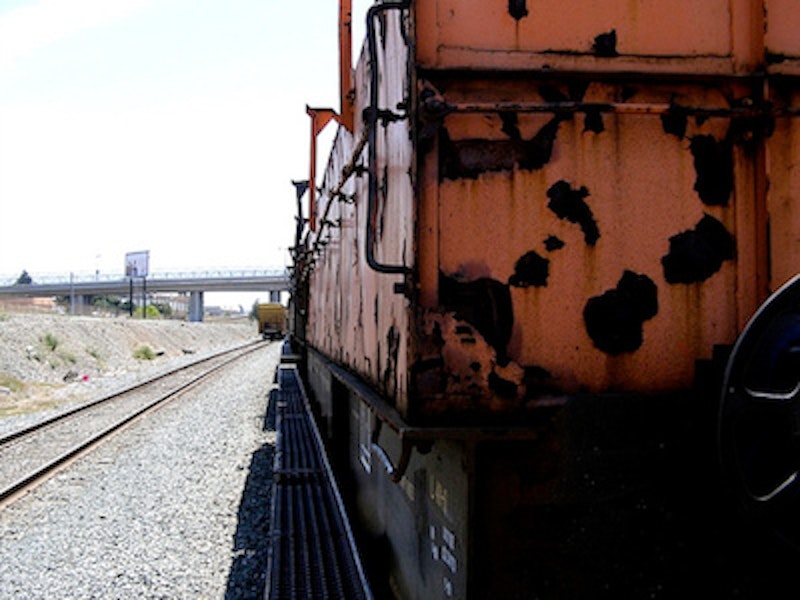 As western civilization sinks deeper into a mire of culture wars and arch conservatism, the call to break out of established routines is louder than ever. Depending on whom you talk to, the debt crisis, unemployment, and the threat of a workplace shootout all present just as much danger as the jumping-off point.

In the hobo world the "jumping-off point" is exactly what it sounds like: that moment when someone decides to jump off of a moving train. This can be the beginning of a new adventure or a grisly end. In 2012, 463 people died in accidents while illegally traveling via freight trains in North America. "Hobo jungles" (the temporary tent cities near rail yards where freight hoppers occasionally live) are magnets for drug abuse, violence, and other public health issues. No one will claim that the train hoppers' world is perfect, but its danger seems trustworthy when compared to some of the risk found in the "normal" world. There's an undeniable immediacy to waking up in an unknown rail yard on the outskirts of civilization. On the other hand, when you choose to do something like (god forbid!) start a career in the arts you sometimes have no idea what the outcome will be until you've invested years or even decades into the endeavor.

Though I've jumped out of the "normal" life in various ways, I’ve never hopped a freight train. My work as a musician gets me plenty of opportunities to travel affordably, legally, and out of harm's way. Nonetheless, the hobo's life is still fascinating. Though my buddy "David" grew up mainly in the mid-Atlantic sprawl, he spent a chunk of his teens and 20s deflecting modern life's neurosis by hopping freights throughout the continental U.S. Lately he's chosen to stay in one place, but when I asked him what it was like to be a 21st-century hobo his memories were colored by a strange emotion, something between wistful and overwhelmed.

Splice Today: When and why did you start hopping trains?

“David”: I rode my first train in February of 2002. I was 16. My life had been one of a lot of bouncing around from one home to the next. So leaving seemed natural at times. I'd had a particularly rough winter that year and the opportunity arose to head south with a handful of friends old and new. I took that opportunity.

ST: What was the longest amount of time you spent traveling as a hobo?

D: A part of me feels like I never stopped traveling. While I feel a lot more rooted now being in (the northeast) for almost eight years, I still feel that uncertainty of life on the road. I referred to my self as a "hobo" at times and even when I talk about it. But I never felt like I was fully on one side of that life or the other.

ST: How far from home have you traveled on freight trains?

D: Most of my traveling on the rails was on the eastern seaboard lines. Up and down the east coast from Florida to NYC. I had a few West Coast treks but a lot of that was catching rides with other people and hitchhiking.

ST: What were the best things about freight train hopping?

D: You have a lot of time to reflect out on the rails. I think I got to know myself a lot better in those times of wandering and solitude. I found independence. People will look out for you here and there in small ways, but at the end of the day you're on your own. The wanderlust was one of my favorite parts too. It broke me out of the small world I was living in and opened my eyes to a new sense of adventure. Even now I'm always finding myself looking to explore more, whether it it’s traveling abroad or just exploring my own neighborhood more. It’s the ability to be by yourself and happy in the silence. I look at the world a lot different now, small towns and the people who live in them, seeing that people have their struggles everywhere, and seeing the similarities while still seeing the differences. Oh, and obviously that fresh open air mixed with the rust and steel. There is nothing like it. Anywhere.

ST: What were the worst aspects of life as a train hopper?

D: Not knowing where your next meal will come from, if you'll have a place to sleep, if you'll get picked up by the cops or not. Hell, even knowing if you're going the right way. It’s scary. I’ve never been so cold at times in my entire life. Shaking, hungry and alone. I also lost a lot. There are years of my life that are fuzzy.

I also now struggle at 33 to have footing in the world. I'm just now trying to focus on my future. Back then you were just trying to make it to the next day. So I'd say I got a terrible sense of planning, more just reacting. I wish I’d thought about that at the time.

ST: Who were some of the most interesting people you met while you hopped trains?

D: I met so many characters. Chris, Dixie and Marc from the Feral House [a punk rock music space] in NC. This bum Chris and his dog Lightning (part dingo he claimed). He was an old-timer with a tree fort back along the river in Savannah (Georgia). He was kind and welcoming when we were all new and lost and let us stay at his camp. That's a story in itself. I heard someone gave him a small sailboat and he set off and was never seen again. Maybe he capsized and drowned? Maybe he’s living his days out on a tropical island somewhere far away? I hope it’s the latter of the two.

ST: What regions of North America make it especially hard for someone to live as a hobo?

D: DC. Very high security. And down by the Mexican Border by El Paso.

ST: What regions of North America are the easiest to travel through via freight train?

D: If I knew that I might still be out there.

ST: Did you ever have run-ins with the law or railroad workers while you were hopping?

D: I'd been stopped and kicked out of yards. Spent 10 days in jail in Kingstree Co., SC for riding in '03 or '04. My last ride ever, we got stopped and kicked off. The bull took good care of us. (Didn’t arrest us and gave us a lift back to the city we were coming from. Not disclosing which area because he may still work there). Though a lot of bulls are dicks for sure—Augusta, Georgia's bull circa 03'/04'.

ST: What are some of the wildest, most interesting situations you found yourself in while train hopping?

ST: You traveled as a train hopper with your younger sister—what was that like? And did you do that often?

D: We rode a few times together. She’s my best friend and I trust her more than anyone I know. So it was always great. She definitely got us caught on that last ride though!

ST: How and why has train hopping been important to you?

D: It’s a collection of pieces both good and bad that make up my life. I smile every time I hear those train whistles crying in the night.