Why William Burroughs Shot His Wife

An incident that haunted him the rest of his life. 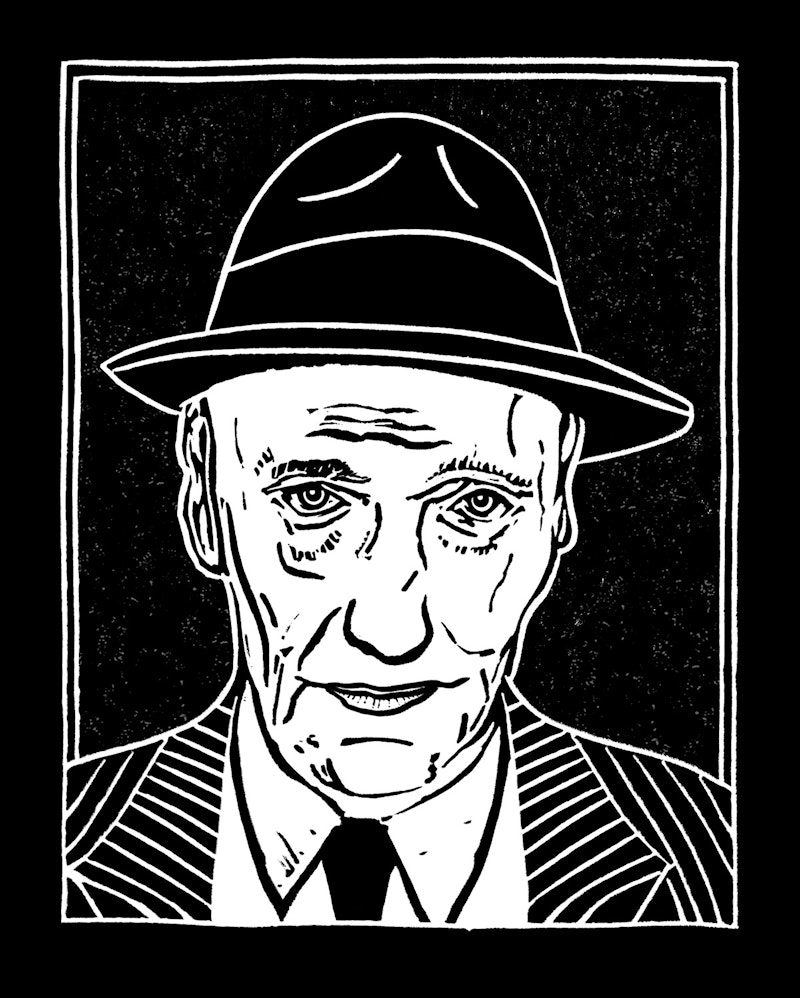 William Burroughs is largely known for three things. He was a junkie, wrote Naked Lunch, and shot and killed his wife Joan Vollmer. The shooting haunted him the rest of his life. It also prompted him to become a writer. In his autobiographical novel Queer, he wrote: “I am forced to the appalling conclusion that I would never become a writer but for Joan’s death… the death brought me into contact with the invader, the Ugly Spirit, and maneuvered me into a lifelong struggle, in which I had no choice except to write my way out.”

Burroughs was born in 1914 in St. Louis, grandson of the inventor of the adding machine and founder of the Burroughs Corporation (this became Unisys in 1986). His maternal grandfather was a minister who was close friends with Robert E. Lee. Surrounded by wealth, he began writing in his early teens. He published his first essay “Personal Magnetism” in 1915 in his high school journal. He also discovered an interest in magic and the occult, claiming to see “ghostly grey figures at play” in his bedroom. He was sent to a boarding school for the wealthy in New Mexico where he wrote in his journal about his attraction to boys.

He went to Harvard where he studied English and anthropology. During this period, he traveled to New York and discovered the city’s gay subculture and underground club scene. His family sold the rights to his grandfather’s invention just before the 1929 stock market crash. Burroughs received a $200 monthly allowance from family. This guaranteed his freedom and survival without needing to work for the next 25 years.

Burroughs briefly attended medical school in Vienna. In Austria, he became involved with Weimar-era gay culture and had liaisons with men in steam baths. He also met Ilse Klapper, a Jewish woman fleeing the Nazis. Burroughs married Klapper in Croatia allowing her to obtain a visa. Back in the States, they divorced and Burroughs continued his liaisons with men. In 1939, he cut off the joint of his left little finger above the knuckle to impress a man to whom he was attracted. (This inspired his short story “The Finger”). He enlisted in the army in 1942 but was accepted as infantry, not an officer. He grew depressed and would be released from the military for mental instability. He embarked on a series of menial jobs including one as an exterminator. (This later informed his novel Naked Lunch.)

In 1943, Burroughs moved to New York. He attended writing salons at the apartment of Joan Vollmer. These gatherings included future Beat Generation writers Jack Kerouac and Allen Ginsberg. Burroughs and Vollmer moved in together sharing an apartment with Kerouac and his future wife Edie Parker. Around this time, Burroughs began using heroin.

He became addicted, a struggle he faced most of his life. He was arrested for a prescription narcotics violation and moved back to St. Louis to live with his parents. Vollmer, addicted to Benzedrine, was diagnosed with temporary psychosis and admitted to Bellevue. This put her custody of her daughter at risk. Learning this, Burroughs returned to New York and asked Vollmer to marry him. They never formally married but she lived as his common-law wife. The two would have a son together, William Burroughs, Jr.

The couple moved to New Orleans. Facing possible detention in Angola state prison for drug charges, Burroughs and Vollmer fled with their son to Mexico. They planned to live abroad until the statue of limitations of his charges expired. Life in Mexico was difficult. Unable to acquire heroin, Burroughs suffered through brutal detox symptoms. He abused Benzedrine and frequented Mexican gay bars. Vollmer drank excessively and mocked Burroughs in front of his friends. Their drug-fueled fights grew violent.

On the evening of September 6, 1951, Burroughs and Vollmer met several friends at an American-owned bar in Mexico City. The details remain disputed but Burroughs allegedly took a handgun from his travel bag and said to Vollmer, “It’s time for our William Tell act.” Vollmer, who was drunk and suffering through amphetamine withdrawal, placed a highball glass on her head. Burroughs aimed and fired. The bullet struck Vollmer in the face. She died a few hours later. She was only 28.

Burroughs initially claimed he dropped the gun and it accidentally fired. He spent 13 days in a Mexico City jail while his brother traveled to Mexico and bribed officials to release Burroughs on bail. He hired a prominent Mexican attorney. Two witnesses testified the gun accidentally fired while Burroughs was checking to see if it was loaded. A ballistics expert was allegedly bribed to corroborate this story. While awaiting trial, Burroughs’ lawyer fled Mexico to escape his own legal troubles. Burroughs promptly left the country himself and returned to the United States. He was convicted in absentia of homicide and given a two-year suspended sentence. He didn’t serve his sentence since he never returned to Mexico.

Burroughs would go on to write 18 novels, six short story collections and numerous essays. His novel Naked Lunch was the last prominent book in the United States to be prosecuted for obscenity. He became a popular counterculture figure, associating with artists like Andy Warhol, Patti Smith, Lou Reed, Bob Mould, and Kurt Cobain. Despite his success, he was haunted by Vollmer’s death the rest of his life. He was struck by another tragedy in 1981 when his 33-year-old son died of a cirrhosis-linked hemorrhage. Burroughs died of a heart attack in 1997 at the age of 83.