The pandemic inspires a mental return to the Himalayas. 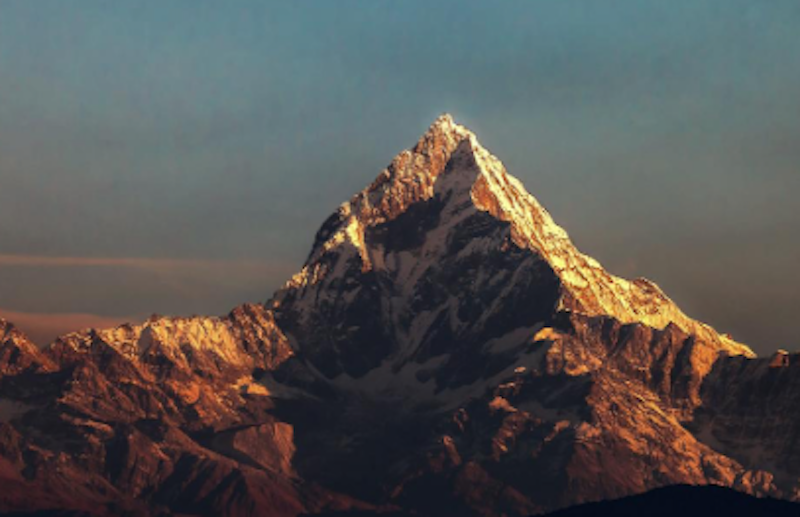 New Jersey is America’s most densely populated state, and Bergen County, where I live, is the fourth most densely populated of the state’s 21 counties, but I can’t really complain about feeling hemmed in here during quarantine. We live on half an acre surrounded on three sides by parkland. The park was a pig farm until the 1960s, and our house belonged to the family that owned the farm; the pigs, incidentally, were shipped to Secaucus and used to make cholera vaccine. So, it’s mostly green that one sees when looking or stepping outside.

The park is now closed, though, along with essentially all parks throughout New Jersey, as local and state officials judged that people were not properly socially distancing. I’ve had doubts about that policy, noting that New York state has kept parks open; but it’s true that the parking lot that sits beyond a patch of trees near our house got crowded with cars early in the pandemic. And there’s no doubt this part of New Jersey, within commuter range of New York City, is a high-risk area, with Bergen County losing 767 people to COVID-19 as of April 19.

If I’d had my druthers on where to wait out the pandemic, I’d have chosen someplace more remote, specifically in Nepal, a country I’ve visited twice and which, as of mid-April, had 31 known cases of COVID-19 with zero deaths. Nepal is currently on lockdown, especially in the crowded capital, Kathmandu, but I’d be at the Tiger Mountain Pokhara Lodge, on the outskirts of the country’s second largest city, Pokhara. This is a lodge with stunning views of the Annapurna section of the Himalayas, and with ecofriendly practices explained by its gregarious owner, Marcus Cotton, in a recent article that also discusses how the lodge is waiting out the current crisis, paying its staff until travel restrictions are lifted and guests show up again.

My family’s connection to Nepal began in 2009 when my father-in-law, Bill Carter, was there on a Fulbright senior scholarship, setting up a university teaching and research program in industrial hygiene, the field of workplace health and safety standards; in the context of Nepal, that meant things such as measuring how much dust the traffic cops were breathing in on the dirt roads, or monitoring noise levels in a rugmaking factory staffed by Tibetan refugees, or the silica dust levels in the brick kiln industry that later was largely destroyed in the 2015 earthquake (a disaster that also was an opportunity to rebuild the kilns to higher standards).

Nepal has its problems, of poverty, corruption, political tensions; but it’s got friendly, talented people, extraordinary scenery and terrain, including of course the world’s tallest mountain (which we saw twice on small planes that give you a close view), robust wildlife, and a rich culture and history at the intersection of Hinduism and Buddhism. For some years in the 1960s and 70s, hippies would travel through southern Asia, often ending in Nepal and particularly Pokhara; then the hippie lifestyle faded, and the Iranian Revolution blocked the trail.

My wife and I visited Nepal in 2009 when her parents lived there. In 2016, we and they came back, with some friends and our son, then six. Both times included a stay at Tiger Mountain. In 2009, the lodge was the endpoint of a five-day trek my wife and I took in the Annapurna mountains with “full Sherpa support.” We’d signed up for that, getting the expat discount through my mother-in-law, not knowing it meant a team of nine for just the two of us: a leader, a deputy leader, a chef, three porters and three kitchen staff. They were an amazing team, even chopping stomach-soothing herbs for me along the mountain trail after I became sick and the antibiotics I’d brought didn’t help.

Our trip in the spring of 2016 was timed on the theory that our son would be old enough to understand and remember much of what he’d seen, and that my father-in-law, in his mid-70s, would not yet be too old to travel. The latter rationale now seems like a joke, in that Bill has made repeated trips of a month or more in subsequent years to do industrial hygiene at a hardship post in Bangladesh; and my in-laws both made a return visit to Nepal early this year.

During the 2016 trip, we wandered down a hilly path from the Tiger Mountain lodge and came across a woman and her teenage daughter selling crafts at a table. It turned out they were the family of a nature guide at the lodge. The girl, Jenisha, was a student, attending a rural school to and from which she should would walk a couple of hours each day. She chatted with my son about math, in her excellent English, as she sold us a replica Gurkha knife mail opener. Her career goal, she said, was to be a cardiothoracic surgeon.

Here in my home in New Jersey, in my freelance work for a science magazine, I’ve lately edited some pieces related to Earth Day, in the run-up to that annual event on April 22. This year is the 50th anniversary of the first Earth Day, held in 1970 amid high hopes that a new era of environmental consciousness was dawning. Proponents of Earth Day now show disappointment that humanity hasn’t embraced such ideals; that we’re not taking climate change and other environmental issues any more seriously than we took the possibility of a viral pandemic.

They’ve got a point. But it’s not all gloom. It turns out you can now see the Himalayas more clearly than in years from distant places in India, as pollution has abated during the pandemic. Public health and economic calamities are not sound solutions to environmental problems. But it’s plausible this strange moment will inspire some new thinking about what’s possible, what’s desirable, what’s worth preserving. I tune out Donald Trump’s briefings as if he were buried at the bottom of a chasm. I work at my desk in New Jersey, and I think about the Himalayas.