To be trusted by Julio was nearly as great an honor as human love. 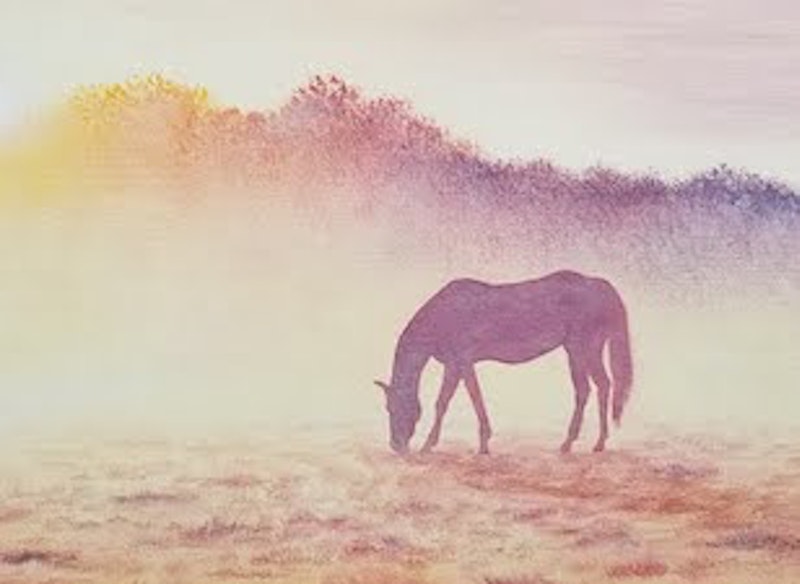 In April 2019, I returned to Dorothy Crosby’s stable in Stoddard, New Hampshire. Freezing rain was falling, had fallen all afternoon. This would not be a riding day. And the Granite State’s fifth season, mud season, had returned. The horses, sheeted against the weather, were in the paddock. I walked up to Julio, who willingly dipped his nose into the halter. I gave him a carrot and began walking to the barn. He did not. I turned. He was focused on my lower right front pocket, where I keep the carrots.

I said, softly and firmly, “Julio, I’m standing in four inches of water, mud, and manure. I have little patience for this.” Then I rustled the plastic bag of carrots in my pocket. To borrow a line from the late H. Ross Perot, there was a great sucking sound as Julio slowly pulled his hooves from the muck and began walking beside me to the barn. Once we were inside, the doors drawn, and he secured, I gave him another carrot.

His tail and mane were encrusted with icy snow. After removing the sheet, I currycombed and brushed him as usual. Then I took out the wire brush. I cleaned his tail and mane. Then I went for his forelock.

Julio dislikes having his face and forelock touched. We don’t know why: he disliked it before Dorothy bought him nearly 20 years ago. Perhaps an accident or an unkindness had left an impression on him as a colt. Before, whenever I touched his forelock, he abruptly raised his head to show he disliked what I was doing. That day, I showed him the brush for five seconds or so, holding it up before each eye. Unlike humans, a horse has 340 degrees of vision. Ten of the missing degrees are in front of his nose. The other 10 are behind his tail.

Then I placed my hand under his forelock so that, as I brushed him, the wire bristles would not scrape his hide, only the snow-matted hair. He went along with this. I was about to replace the sheet when Dorothy asked whether I wanted to try bodywork with him. I hadn’t the faintest idea of what she was talking about. I knew from experience that she always knows what she’s talking about. I replied, “Sure. What do I have to do?”

She placed her hand on Julio’s poll, the top of his head, between the ears. She kept it there for about a minute, and then told me to touch him there. What I felt was vibration—not trembling—the action of the fascia, the network of connective tissues that interpenetrates and surrounds the muscles, bones, nerves, and blood vessels of the body. In a sense, I was feeling the entire flow of data within the horse: thoughts, observations, emotions, feelings. He began lowering his head, blinking his eyes. After about five minutes, he suddenly licked his lips. Dorothy told me this was a signal that he’d absorbed the experience.

A horse’s mouth has three major sectors: The incisors cut his forage; the interdental space, where there are no teeth, permits the discharge of indigestible matter and is also where the bit is placed; and the hind cavity where he chews his food.

Dorothy told me to place my hands along his upper jaw, below his eyes and parallel to the hind cavity. Again, he blinked his eyes and began lowering his head. Again, after five minutes, he licked his lips.

At Dorothy’s direction, I placed my hand on his nose. Julio’s nasal bone ended about two to three inches from the end of his nose: the rest is cartilage. He responded as he had before, even to the licking of the lips. He was completely relaxed.

I said to her, “I have truly enjoyed this.”

She replied, “He knows you. He trusts you.”

I was moved. Horses are prey animals whose first response to anything new or different is, “Will this thing eat me?” Horse and rider have to communicate through the body, the rider striving to communicate clear intent through posture, visual and physical focus, the use of boots, riding crop, and reins. The horse also registers your emotions, intelligence, and capacity. For the sake of his own survival, he comes to know you more thoroughly than can any human. And when we can communicate only through the body, the rider cannot deceive his mount.

To be trusted by Julio was nearly as great an honor as human love.

Mud season turned into spring. The ground dried in the ring and Julio and I began working there. He was idiosyncratic, as usual: one day I walked to the far end of the paddock to find him and the others, fly-masked. I attempted to pass the halter over his nose. The fly-mask concealed his eyes. I sensed he was in a playful mood. He shook his head from the halter before I could close it and began walking along the fence. I began jogging after him. When he wants to use it, Julio has a big walk and used it that afternoon. He continued along the fence, up the hill, around a corner, and along the path that led to the barn. Oddly, this was precisely the course I would have followed had I haltered him.

The other three horses walked along behind, probably to watch the fun.

I continued jogging along, trying to catch up. There are moments when each riding boot seems to weigh 30 pounds. This was one of them. Just outside the stable, Julio paused at the water trough for a drink. When he was finished, he raised his head and submitted to the halter. We were about 10 feet from the barn door. We entered and I secured him. Before I could turn to close the door, one of Dorothy’s thoroughbreds strolled in.

“Not good. One horse at a time,” I said. I seized the intruder by the fly-mask and turned him by gently pressing his side with my hand where I would have placed my boot were I astride him. He balked at going out. Sometimes, the riding crop has to deliver the message. I tapped him twice on the rump. He went out and I closed the door.

Then I removed the fly mask and began grooming Julio. After curry-combing him, I ran my hands over Julio’s nose, jaw, and throat to check for ticks. He had a few scabs from tick or fly bites, but no vermin. Then we rode and I learned more about riding from our work together.

Spring turned into summer, and I continued trying to keep Julio at the trot. Some days were better than others. Sometimes he wanted to work. Sometimes he wanted to stand, serenely looking out toward Pitcher Mountain as if posing for an equestrian statue. Meanwhile, I was squeezing my legs together, booting him, and tapping him with the crop, all in sets of three, and then starting them yet again, and again, and again. I once muttered, quoting Norma Desmond in Sunset Boulevard, “Mr. De Mille, I’m ready for my close-up.”

Sometimes I simply turned in the saddle and belted him twice in the rump with the crop. Usually, he then began a leisurely stroll that I could eventually raise to a trot.

That day, Dorothy told me, gently, that Julio needed to retire. One of Dorothy’s former interns, who had strongly bonded with the horse, came for him over the next weekend and took him to what will be his forever home. He was reunited with an old stable mate, Oliver, a 16-hand registered Clydesdale with the gentle heart and soul of a teddy bear, whose working days are behind him, too.

So my last memories of Julio will be his scent, his bay hide, the sight of the distant mountains seen between his ears, the ever-present sense of his strength, power, and intelligence. And, when we were at the trot on that last day, with his mane gloriously flying, I understood the meaning of God’s paean to the horse in Job 39:19: “Hast thou clothed his neck with thunder?”

I would’ve liked to learn some more things with and through him: to canter, gallop, and take the fence, the glorious moment when horse and rider together soar into the sky. But as Rilke wrote in “Requiem for a Friend:”

We need, in love, to practice only this:

Letting each other go.  For holding on

Comes easily; we do not have to learn it.

May Julio, my comrade, enjoy serenity, affection, and compassion for the rest of his life, and, at the end, a gentle passage to the other side. Surely he will have the soul in Heaven he possessed on earth. There I hope we will meet again.