The Victimless Hit and Run

It's hard to believe someone just smashed our car and didn't leave a note. 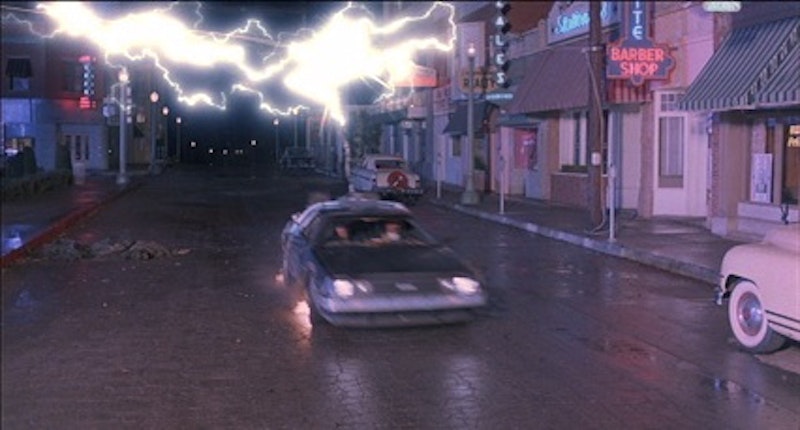 The year was 1985. I’d finally gotten my driver’s license after failing the first time for rolling through the test’s final stop sign. So I was 16, carefree, and armed with the keys to my dad’s former company car: a 1978 Ford LTD II, powder blue, one city block wide by two blocks long. It had been christened “The Godmobile” at my high school as a result of its shouty-caps bumper stickers suggesting JESUS LOVES YOU and that you LET GO AND LET GOD.

Assuming I’d pass the test the second time that day, I had made big plans for the evening (via the harvest gold dial phone I’d rigged to work in my bedroom by cutting a hole in the wall and pulling wires through from an adjacent room). I’d pick up my two friends and we’d head out to see the popular movie of the moment: Back to the Future. That Alex P. Keaton was so cute on Family Ties, we just couldn’t wait to see Michael J. Fox on the big screen.

I didn’t have a lot of practice parking The Godmobile, and when I went to pull into a parking space it in front of the movie theatre, we all felt a huge BOOM and heard a big SMACK! as the car hit a parked van next to us.

Holy shit. Holy shit. Holy shit. All three girls in my car including myself, the terrified driver, just kept repeating the words. We got out, surveyed the damage. The right front signal light had been smashed and pieces of yellow glass lay all over the place. The shady-looking white van seemed undamaged; its thick chrome bumper had taken the impact with only the tiniest scratch, barely noticeable.

We sat on the curb, heads in hands. We can’t go in and watch the movie, someone said. We’ll just be freaking out the whole time. We thought about it. I can’t take the car home, I said, I’ll never be allowed to drive it again.

As we sat there thinking, a man walked out of the movie theater alone, got into the white van, and drove away (probably off to another murder). Well, there goes one problem, said a friend. And then, like lightning striking a DeLorean, one of the girls thought up a plan. Get a bag or something, she said. We did. She began carefully picking up all the pieces of glass and heavy-duty car signal light plastic and putting them into a brown paper bag.

She explained simply that we were going to go in, watch the movie, and then drive home and park the car (in the apartment complex where all three of us lived) near the bend in the road. We’d pull it in backwards, sprinkle the broken glass around, and make it look like someone had simply hit the car and driven away.

We watched the movie. I barely remember it, just the sense that I didn’t understand the time travel thing… how could there be two Alex P. Keatons talking to each other on the screen at the same time?

It was probably 11:30 when we pulled into the apartment complex. It was quiet. I knew my parents were asleep, and the bend in the road was far enough away from our place that you couldn’t see it from the house. Our little pack of 16-year-old girl ninja felons moved quickly, parking the car at the exact angle of perfect automotive vulnerability. We spread broken yellow glass and pieces of light bulb like pro Crime Scene Investigators from a TV show that wouldn’t come out for another decade and a half.

My friends walked home, I crept into the house and went to sleep after several fitful hours of tossing and turning: guilt, fear and anticipation tearing up my stomach.

And the next morning, my mother reported: "You’ll never believe what happened!" (No, I bet I wouldn’t). "Someone hit the car overnight and just drove away. Didn’t leave a note or anything! Probably a drunk driver."