Dueling Assholes at the Backpacker Hotel 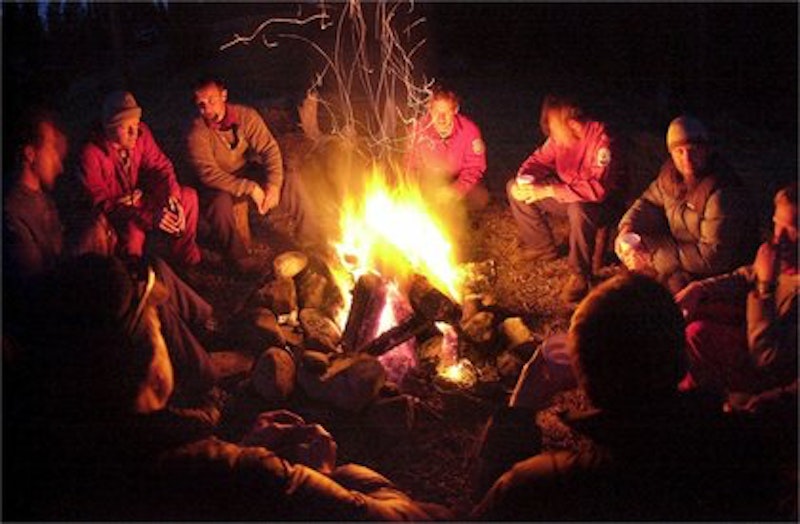 My cousin says a friend of his overheard this one time at a backpacker hotel. A conversation. Basically, a voice at the next table said, “Then, if that's the case, I applaud his judgment.” The fellow said, “applaud” like that, in the middle of a conversation.

So it went. Sentences leaped and died, flopping around like salmon. Each fellow seemed on the brink of making his point. But neither could get there. And these weren't dumb kids, you could tell. They had written good history papers in college, they were used to having opinions. That was obvious from their voices only, since they were around a pillar, but their voices carried.

The two boys were backing into an argument. One fellow had asked the other to endorse a snub that this fellow, the first one, had directed at somebody else, a past traveling companion. But the fellow who was asked for an endorsement would not deliver. He had certain doubts he wanted to voice. Understand that these guys had met just hours before. They didn't know each other, they had no experience together. They had no issues to get straight in their lives through a serious conversation. Their situation came down to this: They just couldn't talk without fencing out who was the smart one, the guy in charge.

Apparently, matters had begun this way. The snubber brought up his snub episode, how one time in Cuba with this guy, he had said, “Well, Souter's good,” and the fellow had folded right up. The snubber's audience answered that, after all, the snub victim had been right. The snub victim had said that at least Democrats wouldn't appoint right-wing judges, and that was true. “Which would be the bigger point here,” the fellow concluded. He said this in a bright, upbeat tone. It was the sound of a contrarian scoring a point.

The other fellow droned back, since he was more stolid. His trick was to speak slowly, for weight. He argued that, no, the point here was that he, the snubber, had guessed that the snub victim would have no cases to cite. The snubee had wanted to talk about the Court but didn't really know about it. The snubber guessed right about the snubbee's ignorance and showed him up; that was the point. Also, the snubber did his reading and knew about the Court.

This is where the period of the flopping salmon began. My cousin's friend was sitting up and paying attention. The voices buckled and jerked, chopped and started. The fellows could not get over the hump and say what had to be said.

A couple of times one would harden his voice. “Look, something you better know,” and “Okay, now that's wrong,” and so on. But the sentences never got finished. This breakdown lasted for five minutes plus. The fellows couldn't say anything and they couldn't be quiet.

My cousin's friend (a Frenchwoman) guessed that they were both large or otherwise very masculine-appearing types, and they relied on this appearance to get them their way in polite conversation. Such men have a way of setting their eyes and hardening their tone when a discussion is not trending as they like. Faced with each other, two bluff artists, they were realizing their lack of follow-through.

I think they might also have been out of their depth regarding the topics at hand. To make sense, the boys would have to debate what was the purpose of a discussion, what was the use of civic knowledge. Neither was up to it, so they floundered.

But the floundering was prolonged. My cousin's friend says their “disconnected stamina” (her phrase) was remarkable. They would keep putting the words out and hope for something to snap together. In the meantime there was a battle for airspace and it had to be waged. She thought they would never shut up.

One of them left. She glimpsed him at the door: a broad-shouldered young man with a stomach, and he had little glasses and a Trotsky beard. He might have been 30.

The fellow looked back, presumably at the table he had left. A voice from the table said, “Uh well, uh, um, if you're so left-wing, why do you think Souter's good? “It was the contrarian, but his voice no longer had its triumphant ring. He sounded hoarse and urgent, as if the thought of thoughts had finally occurred to him and he wanted it to climb out of his throat and do so fast, before it was too late.

“I mean,” the contrarian said, and now he sounded a bit self-conscious to be talking loudly, to be speaking across the floor of a fairly big common room, “have you figured out why you read about the Supreme Court? Apparently your views on the law might not, not, be what you think they are.” His voice broke on the “not.”

The fellow at the door said nothing. He left. But first he wrinkled his nose and gave a neat quarter-turn so that he faced the door again. It was not quite a flounce, too straight-edged for that. But to my cousin's friend the sniff and turn seemed ritualistic, like the fellow was making an official entry in his mental book. As far as the fellow at the door was concerned, the contrarian was going into life's loser column. It was the break in his voice, that was the reason. That's how my cousin's friend read things.

The contrarian must have thought he had really scored his point, saved the day, nailed the first guy's blindness and mental gaps. Meanwhile, the first guy snorted to himself about the guy's delivery. But there you go—different philosophies about the what and why of an argument.