A psychedelic excursion from many years ago. 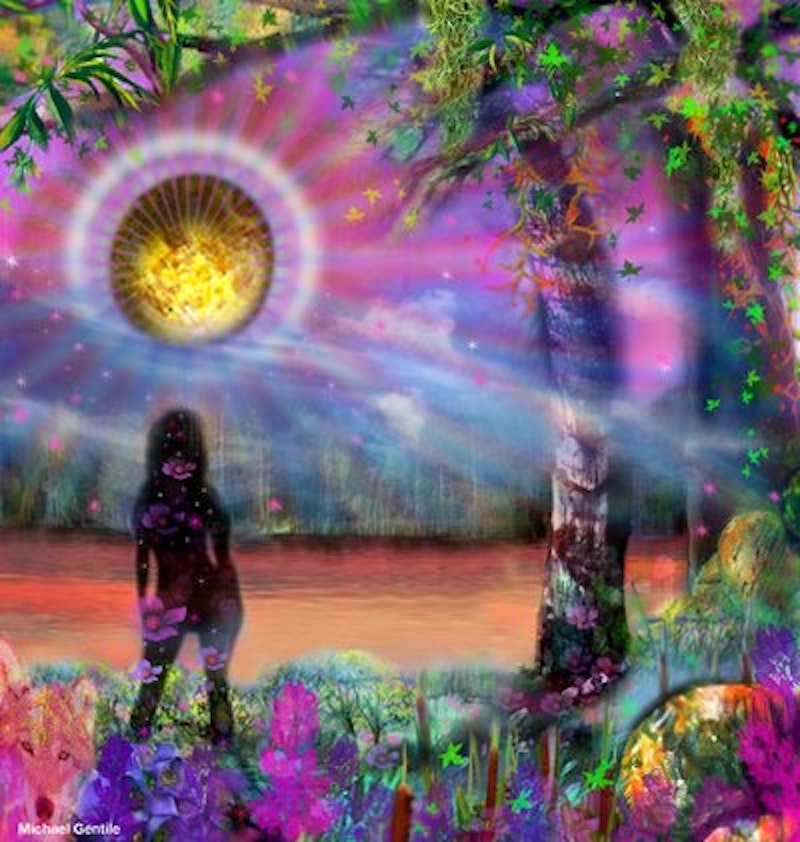 Along the Aconite River, a certain mood sets in as long dark stripes of clouds gather at dusk. Thick Spanish moss hangs from scary oak trees. The summer steam rises, forming vapor circles around thickets of white snakeroot, certifying what lies ahead is one long and deadly road. You’re in a sassy grass green Nova SS, the best muscle car ever, barreling through the heart of the South.

One might call them good times, or one might not. You peer out the car window as a rush of warm air whips around your head. Cicadas echo in your ears, playing their noise at full volume in stereophonic layers of hypnotic drone. Driving along on such a dangerous stretch of blacktop would frighten a United States general. His fear would be akin to an abandoned child on a pier with a dark storm approaching.

This euphoria stops as you pass an EJ Korvette’s. You’re cramped in a tight backseat. Big mistake? It’s always a risky bet hanging out with neighborhood rebels Rick, Tony and Luke. They’re a bunch of old friends with a long history of failures in life. Luke spins a 360-degree doughnut, fishtails across the road and parks the Nova on Oleander Dr. Several shadows emerge from the vehicle and slowly cross the roadway. The rule was: last person in always buys the first round.

The Stumble Inn is located along on the outskirts of the city. A bright red neon sign glows in the front window. Gypsy moths swirl around the parking lot light poles. Welcome to a biker bar that’s plenty redneck: beer, whiskey, and fistfights. You have: lottery tickets, booze-to-go, Slim Jims in the front, pool table in the back and a “songs that won’t go away” jukebox in the middle. Perfect.

I’ve come to notice my man Rick wears the same ripped-open Route 66 t-shirt. The vet’s semi-crossed eyes sit above an s-shaped nose. If you stare at Rick’s hairy chest, Jesus will wave to you with one hand, hanging off his silver cross with dog tags swinging back and forth. Rick’s pumping coins in the jukebox. The music machine belts out a bass line, “thump, de thump, de thump, de thump, thump,” and “Hang on Sloopy…” starts playing.

Flashback to young Rick Derringer shaking his head back and forth on American Bandstand, “…Sloopy hang on, Yeah!” Rick the guitar-wringer with The McCoys, the guy once considered by Doris Day’s son, Terry Melcher, as a potential guitarist for Charles Manson. After stints with Johnny and Edgar Winter, he later went on to record the 1973 hit, “Rock and Roll Hoochie Koo,” which it made to #23 on the charts. Derringer once opened for Led Zeppelin.

Out of the corner of my eye, I noticed our Rick starting to lose it. Twisting and spinning in circles, stomping his combat boots like a spastic chicken, ghosts appeared out of nowhere and Rick witnesses thousands being massacred. “I’m good, I’m good.” he coughs out. After gulping another shot, Rick falls head first into the jukebox. “BAM!”  He scores. Tony helps out and we put Rick in the penalty box, a red vinyl booth. That’s my Rick.

Tony the lawn mower man knows a bit about lawns. You’d think. His constant occupational exposure to DDT, plus steroid use is considered highly dangerous. Tony’s prone to erratic mood swings and outbursts from the antipsychotic agent Haldol. Exactly how Haldol works is not known, but it blocks certain brain chemicals. Tony slurs words, repeats things and rambles on. Not a bad guy, just hard to follow at times. Tony’s been known to rip up zoysia grass lawns with his bare hands. He often said the Lord spoke to him in nursery rhymes during his sleep. Which seems odd, because he’s an atheist.

Then there’s our stoner savant Luke. He speaks from a bar stool pulpit, blurting out an awkward, “There’s a lot of weird, violent stuff going on. Now you know me, just sayin… see what I’m sayin.”

Luke, sporting a gap-toothed smile, penetrating cold blue eyes and flaring nostrils, is a forgetful fun lover with a scatterbrain streak in him. He once locked all the doors in his house and left the propane on. It was just one of those mornings. You can’t help but wonder, are these guys really your friends?

Tony’s busy by the pool table watching a hustler shoot difficult bank shots. Rick’s passed out in the back. Luke’s busy dipping around his pockets looking for space exploration material. He discovers two small purple beads of pure lysergic acid diethylamide stuffed in the mysterious Levi jean fifth pocket. “Nice!” That gave him something to smile about. The magic starts.

Out of nowhere the sound of motorcycles gets louder and louder. The deafening roar announces an onslaught of five dark figures. Pulling their choppers into the parking lot and kicking up a lot of dirt, the iron horses ride in a helix pattern. These thrill seekers are wearing red lipstick in search of riding buddies. Nothing short of sorcery, they’re furious speed demons, not outlaw cruisers sporting bats and sawed-off shotguns, still, nothing to mess with.

Settled inside the strange atmosphere, a biker with a diamond cheek piercing slams her helmet down on the bar. Black leather-clad Ivy Hornet puts her sting to work and has direct eye contact with Luke. She leans forward, bumping his elbow ever so slightly and whispers a sassy, “Ooh, did that hurt? Sorry. I’m here to drink.”

Luke was busy fidgeting with a dead fly in his drink, grabs his glass and smashes it against the bar. Nobody bats an eye as broken glass flies everywhere. Ivy, mildly amused, calmly says, “Now that the ice is broken, what are we thirsty for tonight?”

Sitting on top the world with nothing between her and heaven she draws closer to Luke, pressing hard against his side. The biker beauty orders a Tequila Sunrise. Acting on impulse, Luke motions Ivy to open her mouth and places a purple dot on the middle of her tongue. Ivy responds and laughs, “You’re a good boy!”

The stars seem to be in a lucky position because Luke and Ivy are off to a good start. After an hour of rubbed thighs and small talk passes, the acid really kicks in. The laughs were constant. Their minds peeled like bananas. Pulsating kaleidoscope shapes covered the walls and brilliant colors are flowing everywhere. They’ve taken off, operating at full capacity, enjoying the ride.

“I’m gonna proclaim a little truth to yah. Let’s turn up the high spirits, wanna take a walk?” Ivy presses her finger on Luke's temple and starts rubbing his head. “Speak to us, Oh Mighty One!” Her voice makes Luke’s mind fuzzy and buzzy, swaying back and forth in sexy wavelengths of color.

They leave the bar together brain-numbed. Luke’s fingers feel like Jello and appear extremely long. In the carmine light, the couple’s bodies are taken over by their minds, melting and falling through miles and miles of cold universe. You can feel starlight detect your body in this haunting atmosphere. Luke finds a small rock and keeps it. He forgets something and runs over to the Nova, opens the trunk and grabs his silver-headed wolf walking stick.

“Cause I know where there’s a hidden black lake.”

“Doesn’t take much to impress me.”  Her red mouth is pouted.

They set out for a journey behind the bar in a wooded area, surrounded by fields of violet wolfsbane. The plant used since archaic times is known as “the queen of all poisons.” Wolfsbane juice was put on arrows to kill wolves. According to myth, wolfsbane is needed for the complete transformation of man to wolf. The plant originates from Cerberus, the slobbering, rabid three-headed guard dog that stands at the gates of Hell. It’s deadly and a cause for concern, so you better be careful where you walk.

The sky is filled with thousands of thin wispy, white clouds. Rays of light vibrate from the huge orb hanging midway in the horizon. Radiance from glowing moonbeams flickers through the trees. The only sound is the underfoot snap and crackling of cattails. Luke wipes his dew-beaded brow with a piece of wolfsbane and soaks in the intensity.

Ivy’s suddenly overwhelmed with anxiety. Is this a trap?

“There’s nothing to be afraid off. I brought you here to show you something you’ve never seen before,” Luke exclaims. “What’s that?” Ivy asks softly. “Something you’ll like,” he replies.

“Heaven or a grave?” A startled Ivy watches in slow motion. Luke has a wild, savage look in his eyes as he grabs her arm.

At that same moment, a prowling silhouette crept quietly through a layer of fog. The large looming animal was behind her. The lupine crouched knee-high on all fours. It grew hair and saber-like claws. Its sharp teeth glistened, ready to gnaw flesh. The silent night is interrupted by one long, screeching howl. Then the beast swirled around and dashed into the black trees. A solo figure stood for a moment transfixed with the moon shimmering above the river.

You close your eyes. A series of yesterdays pass—like a scene in a 1940s noir movie—one where the pages of a black and white calendar fly by like flashcards. What makes this a dream or a vision?

Forty years later, Oleander Dr. still overlooks the Aconite River but a list of things have changed. The edge of the city now has a big beautified, sunny park with new benches. The surrounding gardens are full of fat bumblebees finishing off summer’s bloom. Where a deadly plant once grew, joggers run past. If someone told you this was your transcendental spot of the past, no one would believe you.

Sadly, Rick and Tony have passed away. The Stumble Inn’s gone, a luxury apartment building stands in its place. Families picnic on the big lawn. Infants are breastfed where cottonmouths once slithered. The noise of bikers replaced by the giddy laughter of shirtless, buff jocks tossing a football.

Passionate moments are often made in adverse situations. That little rock in your pocket, it’s a small reminder of your past that faded into a gentle, pink dawn horizon. The Aconite River’s waters run deep and its secrets remain silent.