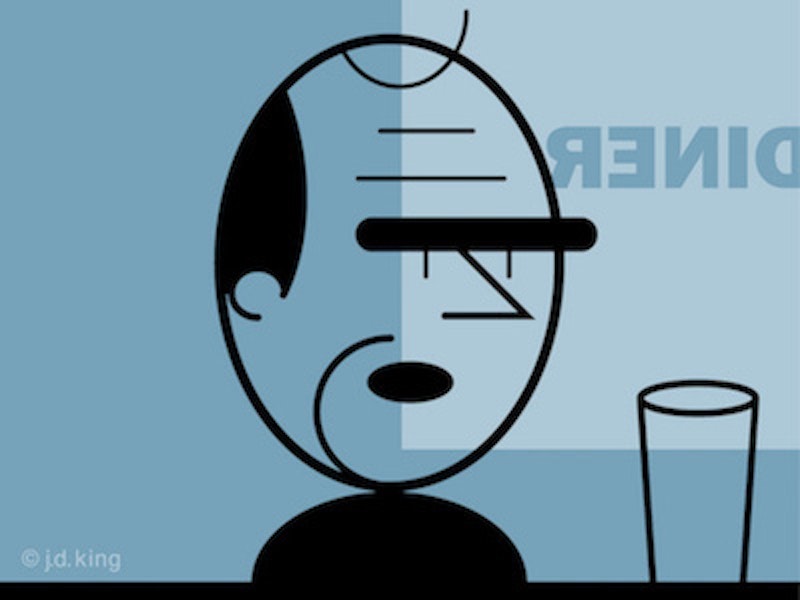 “But I thought they weren't speaking."

It'd been raining heavily all week. The windshield wipers on Stu's rusty Toyota whisked back and forth: flick, flack, flick, flack. His neck craned like a turtle’s, his eyes drilled ahead, and he continued, "David wants to watch a TV show, so that makes him an asshole? In his own house? On his birthday? Well, Deb and I want to watch The Odd Couple, too. Does that make us assholes? Are you going to call us assholes? Or will you wait until one of us has a birthday, then come over to our house and—behind our back—call us an asshole?"

Stu said, “This diner is great, absolutely great. I’ve been coming here since I was a kid,” as he pulled into the lot, as close to the diner as he could get, which wasn’t very close. They sprinted through the pouring rain, settled into a booth. Phil said, "If I met a girl from Canada, I'd move in a heartbeat."

"Are you crazy? Canadians are as just stupid as we are, even more so—plus they'd hate you for being an American. Each one of them has a chip on his shoulder like a cinder block. They resent living in our shadow, knowing that none of us care about our friendly neighbor to the north. They’re losers, resentful losers. By the way, order a shake. They make great shakes here.”

"What about Kingston? I was there once, it seemed pretty cool. And there's national health."

When the food arrived, Phil's shake was ice cream deep-frozen in a large stainless steel tumbler. He poked at it with a spoon to little avail. ”What's the deal with this?"

"Oh yeah, their shakes are really thick!" Phil put the spoon down and drank water with his fairly ordinary burger.

At 3:00 the place was packed with generations of grotesques, laughing and hollering, the jukebox blaring away. Stu fumed, “Beeville, New York, the crossroads of East Bumfuck and Lower Slobovia." Phil added, "After four years in Helmer, I'm still searching for a sign of intelligent life."

Stu winced. ”I hate The Beatles. They never did anything original in their entire career. All ever they did was copy and paste. I prefer The Monkees. I don't love The Monkees by any means, mind you, but I appreciate them for what they were: honest frauds."

“You hate The Beatles? You enjoy being contrary."

"That's not true." He took a bite of his pastrami sandwich, chewed, drank some black coffee, then said, "You know, if you moved here, we could introduce you to at least a dozen very cool single women."

"But you told me it's a miracle that you met Deb." Stu picked up a menu, scanning desserts. "The pies here are great." All things considered, Stu had lucked out with Deb: not too plump and smart enough. Best of all, she had a corporate job, allowing Stu to chip away at his freelance writing and teach one class at the community college. Phil had two dead marriages under his belt, the good one killed by cancer, the other by divorce. He’d been in sales but was now scrounging, living on prematurely cashed IRAs, trying to hold on until a job or an inheritance arrived.

Back on the road, Stu hit his boiling point, the lid rattling, stuff spilling on the stovetop. “Gramps! He pokes along in his stupid minivan, 30 in a 45 zone—until I try to pass! Then he floors it! Fucking asshole—just like everyone else around here! Passive-aggressive, each and every one! Last week, in line at the Rite-Aid, a rube stepped on my foot and didn't apologize! I said: ‘Excuse me for getting my foot under your heel, Gomer!’ He still didn't apologize! In fact, he yelled at me! I shouted back, and customers started clearing out. It got tense.”

Voice rising, more stuff spilling, hissing on the burner: "Did I tell you about the putz next door? He parked his truck in front of our driveway! The first time, I was nice to the frickin’ moron. But he did it again! I didn't even talk to him that time! I waited until dark, dressed in black, put on a ski mask, snuck out and keyed his truck: his shiny, brand-new, big-fat, wide-butt Chevy truck! Stem to stern, scratched! The next morning he goes outside and he's furious! The idiot's dancing a jig, hitting himself on the head! The dope has no idea I did it! He thinks it was kids. The next time he parks in front of our driveway, I'll have it towed! I don't want that scratched-up heap in front of our property.“

"No one fucks with me, man!" said Stu, hitting the steering wheel with the heel of his palm. He stared into space, scowling.

"So why do you think I should move over to here?"

"It's a great area. We could introduce you to 100 terrific people within two weeks, you wouldn't be so isolated. It's close enough to Syracuse that there are things to do. You'd love it here. We love it here!" Stu rolled into his driveway.

"But you're forever grousing about all the assholes."

"But you're moving to Chicago."

"This place stinks. In Chicago, people on the street will strike up a conversation with you, total strangers! That would never happen here."

On Phil's drive home, the rain escalated to a torrential downpour, visibility nearly zero. He zigged when he should've zagged, wound up on the wrong Interstate. Cursing, he took the first exit, saw a motel, parked, dashed in to ask directions. The kid behind the desk said. "Take a right out our driveway, go about two miles. Just past the train tracks, you'll see a sign for the Thruway, take a right. If you come to the McDonald's, you've gone too far."

A charm, the directions worked. Sailing home as the storm began to clear, Phil thought, “Kid, ya done me a solid!"